September 11, 2011
On this 10th anniversary of 9/11, I asked noted Catholic author and theologian Father John Trigilio Jr., president of the Confraternity of Catholic Clergy, to reflect on the national tragedy, and in particular the proliferation of 9/11-related conspiracy theories in recent years. The following is Father's response (slightly edited):

'Saint Peter's admonition applies well today. He warned us of the attacks of the devil. The prince of darkness has many allies and henchmen, from Hitler and Stalin to Osama bin Laden and al Qaeda. Evil takes many shapes and forms, but has one purpose: to destroy good. Satan hates God and anyone connected to Him. He will fight on both fronts, physical and spiritual, since man is both body and soul and both were created by the Lord.

'Conspiracies are demonic. They feign real fellowship or communion by uniting people for nefarious reasons. True fraternity seeks the common good. Conspiracy seeks division and destruction. Hence, Judas conspired with the Sanhedrin to betray Christ for thirty pieces of silver. Then there are the phony conspiracies, like the one the Temple leaders made up to discredit the Resurrection: paying guards to falsely claim Jesus' followers stole His body.

'There are still some who claim 9/11 was a conspiracy, not of the terrorists, but of our own government. Like those who deny that astronauts actually landed on the moon, there are people who insist the president knew about the attacks ahead of time and allowed them to happen so he could go to war. The same theory was espoused about FDR and Pearl Harbor sixty years earlier.

'Josef Goebbels, the minister for propaganda for Adolf Hitler, said: 'The bigger the lie, the more people will believe it.' Whether it is UFO cover-ups, Bigfoot or the Loch Ness monster, there will always be someone who insists that a conspiracy exists to hide the truth. The truth about 9/11 is that America was attacked by forces of evil. Evil men committed evil acts. Evil governments give safe passage and haven to evil groups who commit acts of terrorism.

'Terrorism is not war in the proper sense. War is between nations and is declared by legitimate leaders. There are just wars and there are unjust wars. Terrorism is a criminal act of a group against individuals, other groups or against nations themselves (as in the case with the U.S.). Wars end when the enemy nation surrenders and a peace treaty is signed. Terrorists do not surrender, nor do they follow the rules of war. They have no honor. They attack civilians and non-combatants as well as military personnel and installations. Terrorism seeks to destroy the leaders and the people they govern. They are a cancer to civilization itself. It is barbarism at a level of critical mass. Attila the Hun and Osama bin Laden were similar in their desire for blood, revenge, inciting fear and the infliction of great suffering and death.

'On this 10th anniversary of the cowardly attack on America by radical, militant, fanatical terrorists, we cannot diminish nor dilute the depth of guilt and responsibility they bare by insinuating or implying a conspiracy here at home. That would be obscene. 9/11 are more than two numbers. They symbolize a day of horrible suffering and heinous evil when Islamo-Fascist terrorists murdered thousands of innocent men, women and children. It was a day of infamy to rival, if not surpass, Pearl Harbor Day when the empire of Japan made a sneak attack on the U.S Navy in Hawaii on December 7, 1941. Sixty years later, another sneak attack was made, this time not on a military target, but on innocent, non-combatant civilians.

'This unspeakable act of cowardice and reprehensible evil makes 9/11 more than mere numbers. They represent enormous pain and suffering. First responders, EMT, police, fire-fighters, et al., risked and in many cases sacrificed their own lives in order to rescue (then retrieve) any and all victims. Ironically, the plans by Osama bin Laden and al Qaeda to terrorize America backfired on them. There was no civil unrest, no rioting, and no looting. We did not see anarchy in the streets, instead we saw fellow citizens showing great courage and bravery. In the worst of times we can often see the best of human nature. Brave men and women helped their neighbor and complete strangers. We were united, not divided, as the terrorists had hoped. Blessed John Paul II often said: 'Evil is never overcome by evil; evil is only conquered by doing good.'

'9/11 was a complete failure for the terrorists. They did kill thousands of innocent lives, but the survivors and the rest of the nation — and indeed the rest of the civilized world — were on the same page: the ends never justifies the means. In other words, you can never do evil no matter what your intentions. When we were maliciously attacked, our government and our people were of one mind and heart. Justice will be done; evil will be punished and good rewarded. No rioting, no looting took place in American cities, whether in New York or Washington, D.C.

'The heroes of Flight 93 showed the world that ordinary people can do extraordinary feats of bravery. The American spirit was not killed nor even injured. Thousands did die a horrible death, and they will never be forgotten. What our enemies fail to realize is that our nation was founded on the principles of inalienable rights and freedoms, the first and foremost being the right to life and the freedom of religion. Christians, Jews, Muslims, etc., have the ability to worship God unfettered by the state. This is not the case in much of the Middle East in Arabic countries. It is a capital crime to make converts from Islam.

'Yet we do not see Christians blowing up cafes or shopping centers. Pray that the majority of moderate Muslims will denounce and repudiate the violence done by those who distort and pervert their religion merely to advance a political agenda. Just like the fanatical fundamentalist Westboro Baptist Church is condemned by Catholics and Protestants alike for their hateful ideology, so, too, mainstream Muslims must step forward and condemn violent forms of their religion.

'Americans need to honor the brave and courageous who risked and who sacrificed their lives on 9/11. Justice demands that the guilty be punished for their crimes. Charity demands we do not blame all Arabs or all Muslims for a minority of fanatics. At the same time, we must defend ourselves and stay sober and alert. We must protect our citizens from terrorist attacks.

'The terrorists sought to divide America by attacking us ten years ago. The Japanese Imperial Navy had the same erroneous idea in 1941. On the contrary, when attacked, our nation banded together. Strangers helped rescue people they never knew. People behaved with dignity and integrity. No looting, no riots, no bombing or torching foreign embassies occurred. Americans were united — E pluribus unum.

'Some claim our unity was short-lived. Some claim our politicians have made our nation contentious and divided. As animated and as spirited it gets in Washington between Democrats, Republicans and Independents; between Congress and the White House; between liberals and conservatives; the truth is we can disagree with one another. Our Constitution guarantees that we can disagree with each other and with our government. We can vote people into office and vote them out. We can speak up and speak out, or we can remain silent. Our country allows us to differ.

'Totalitarian governments, on the other hand, be they fascist, communist or socialist, impose uniformity and oppose any kind of political dissent. The party or the state means more than the person. This is not our Judaeo-Christian heritage, however. We do not lose our inalienable rights just to elect political leaders. The right to life comes from our personhood and not from any government or document. Along with our right to life comes our right to defend and protect ourselves, our loved ones and our property.

'The terrorists who attacked us ten years ago hate us because we have freedoms and liberties they do not experience in their native place. They would replace the natural moral law with Sharia Law — and then with no law at all. Terrorists are not religious fundamentalists or even extremists; they pervert and distort religion to suit their own agenda. They manipulate their religion to promote their political aspirations: the establishment of a worldwide caliphate. They want to rule and subject everyone to their autocratic authority. There are religious fanatics to be sure, but they are being used as tools and pawns by the terrorists. Zealous souls are recruited for the jihad against the 'Great Satan.' That is the lie they tell their young. They pervert the holy act of martyrdom.

'A martyr is an innocent victim who is killed for his or her faith. A terrorist, on the other hand, is one who kills innocent victims in the alleged name of religion. Homicide (pseudo-suicide) bombers can never be called martyrs. They are murderers. A martyr is the person who is innocently killed because of his or her faith. Ironically, the terrorists have made martyrs of their own victims. Their victims were murdered because of their faith. The victims of 9/11 at the World Trade Center, the Pentagon and on Flight 93, which crashed in Shanksville — they were martyrs. They were unjustly killed. They were innocent and were murdered by al Qaeda. 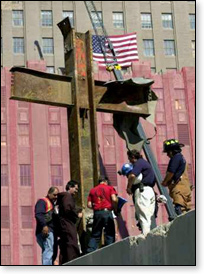 'The bigot blames all Muslims and Arabs for 9/11, and that is wrong. The 'politically correct' blame no one; that is not only naïve, it is irresponsible. The terrorists are to blame for 9/11. They were radical, Islamo-fascist barbarians who distorted and perverted their religion in order to achieve their own goals. They serve themselves, not God. But they use religion to lure in potential followers. That is the real conspiracy. Our battle is not with Islam or with Arab nations. Our battle is with terrorists who violated their own religious tenets and inflicted pain, suffering and death on innocent victims. Like all criminals, the terrorists must be stopped and prevented from continuing their reign of horror. Meanwhile, America should never back down from defending herself from all enemies, foreign and domestic.'