I asked Father Joseph Klee, a priest of the Diocese of Columbus, and Father Frank Pavone, national director of Priests for Life, to comment on Terry's pro-life Super Bowl ad campaign.


'[Regarding] Randall Terry's plan — first of all, I am thinking that 'I'll believe it when I see it' — namely, that the anti-life powers-that-be will find some way to keep such effective and necessary messages from ultimately making it to the airwaves. Yes, the law supposedly is to allow a presidential candidate to air his messages uncensored, but this nation's 'president' alone has committed an innumerable and dizzying number of crimes and transgressions against the U.S. Constitution and so many other laws during his occupation of the Oval Office. I should think that, as a 'trickle-down' effect of such a criminal modus operandi from on high, to suppress Randall's commercials would be predictable and inevitable. 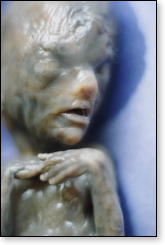 'Having said that, given the unprecedentedly-entrenched culture of death in this country, the ever greater complacency towards the unspeakable violence of abortion that it engenders, the daily decline of public morality in so many regards, and so on, the actual airing of such messages would be ultimately warranted. Christian sensibilities continue to be beaten to a pulp by the growing audacity of rampant secular forces in uncountable ways and in every outlet of the media.

'The proliferation of pornography in all its possible forms is only one example, but curiously, such proliferation is typically met with mere yawns from the supposedly Christian majority of the nation. Just as Randall Terry was truly responding to a divine call when he initiated the Operation Rescue civil disobedience movement in the latter 1980s — jarring our society out of the moral slumber of that time — this latest inspired initiative of Randall should come to pass. I only hope and pray that the forces of darkness will fail in stopping this project's implementation.'


'I thank Randall for doing the challenging things that he has had to do to run for political office in order to secure the right to air uncensored ads about abortion. For most people, the word has lost practically all its meaning; it's time to show the public what it is. We're not the ones who should be apologizing for that; the abortionists should.'