...For though I should walk in the midst of the shadow of death, I will fear no evils, for you are with me. Your rod and your staff, they have comforted me. You have prepared a table before me against them that afflict me. You have anointed my head with oil; and my chalice which inebriates me, how goodly is it! And your mercy will follow me all the days of my life. And that I may dwell in the house of the Lord unto length of days.


We all have experienced sorrow or tragedy in our lives — some more than others. Many days, life is painful. Faith is tested. Depression sets in. And it won't go away.

During these troubled times, I'm comforted and edified by the writings of noted priest-psychologist Father Benedict J. Groeschel, C.F.R. Below is a significant portion of the Preface to Father's book The Tears of God: Persevering in the Face of Great Sorrow or Catastrophe, which can be ordered in one of three formats by clicking here.

Thanks to Mark Brumley and Megan Bless of Ignatius Press for allowing me to reprint this material. 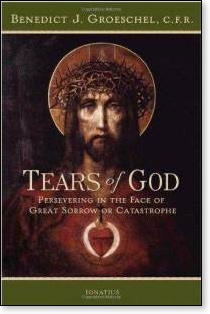 Some time ago, I published the most popular book I ever wrote, Arise from Darkness. It is a book about what to do when life doesn't make sense. Many people have told me that it was helpful to them in difficult times with problems of the family, with the Church, with finances, with themselves. I became aware, however, that there was another group of people who read the book but whom I had not reached: those who had suffered catastrophes or horrors. We all have sorrow, but we don't all have the horrible in our lives. But it does come. It comes to people we know, and maybe some day it will come to us, and we will have to be prepared.

I had thought of waiting to write a book like this until I was dying of a terminal illness because then I would have a personal experience of the catastrophic. Devastating events of life have happened to me in the past, but nothing that I could call a real catastrophe. Then, I was struck by an automobile and lived through a real catastrophe. It turned out that it was not as bad as it originally seemed, and I have been able, with limitations, to get back to my pastoral work. But it lives on still. As I awoke in the hospital from three weeks of unconsciousness and realized that I could hardly move, I thought, "Well, Benedict, you've had your catastrophe. Get writing."....

I am writing this book now, first of all, for those who have experienced horror or catastrophe in their lives. This includes the appreciable number of people that you read about in the course of a month in the newspapers of any city. Not only are there murders and accidents and firefighters or police killed in the line of duty, there is often the terrible news of young men and women being killed in military service. As I write this, we are involved in the conflict in Iraq, which frequently brings accounts of the deaths of many innocent people on all sides. Not only this, but we read about natural disasters ranging from tornadoes to the collapse of bridges. We read about unspeakable tragedies in families where sometimes a family member, apparently out of the blue, kills other members of the family or innocent children, or a neighbor loses his mind and goes on a rampage, as happened in the case of the girls in the Amish schoolhouse in 2006.

These are all horrors and catastrophes. Add to them the death of small children, whose terminal illnesses are catastrophic. The death of an older person, although it may leave many people deeply saddened, is not usually considered a catastrophe; when the person is the mother or father of small children, however, it deserves that designation. Personal moral failures or false accusations often bring catastrophic consequences, which are generally not described as horrors.

Third, this book is for those who are aware of catastrophes around them, who read about them in the newspaper and pause to say a prayer, who think about those who have been deeply hurt and realize that such things could happen to them. Not long before the writing of this book, a beautiful family was killed by criminal desperados who broke into their home and left only one parent alive. Day after day, I remembered this family in my prayers, and although I never met them, I suffered with them. Don't we often think of such things as we pass through life? And each one of us who is thoughtful and reflective knows that such a thing could happen to us. We pray to God that it doesn't, but it is wise to meditate on the possibility and to think about what you would do and where you would turn. This book is also written for this group of people.


A Book about Faith
It is rather obvious, considering the authorship of this book, that it is about faith, faith in God and, further, faith in a God who cares about us when we are in need. But by catastrophe, faith can be severely tried, and it may even lead to questioning. Faith in God has often, in the past, particularly in the Bible, been put to great trial. Over and over again the psalmist in the Jewish Scriptures asks God: "Where are You? Why did You let this happen? How long are You going to let it go on?"....

In the Christian Gospels, we have the example of the Son of God Himself weeping at the death of His friend Lazarus, and particularly asking His Father on the Cross, "Why have you forsaken me?" These two events gave rise to the title of this book, The Tears of God. For the Christian, the tears of Jesus of Nazareth are the tears of God. The only way that the Divine Being could enter into the sufferings of mankind was to take on a true human body and soul. That is the mystery of the Word made flesh.

If you are reading this book at a time of personal tragedy, you may even be inclined to be cynical about or angry at God. May I ask you to keep reading? This reaction, while not the best, is totally understandable and one that apparently Christ Himself in some way faced in His life. The cry from the Cross, "Why have you abandoned me?" expresses a feeling that, like a cold chill, can come over a fervent believer. But we must go on. Part of the answer for us is to look more deeply into what Christ and His followers have suffered during their lives and to come to some understanding that God uses catastrophe ultimately as part of the great work of salvation, for the human race and for the individual....