April 23, 2012
The following are excerpts from the introduction to Father Mitch Pacwa's book Catholics and the New Age.

Originally published in 1992, Father Pacwa's book is still timely, especially given that many religious communities have, over the last few decades, become infected by the New Age Movement (among other things) and have lost the true faith.

Thanks to Kathleen M. Carroll of Franciscan Media for allowing me to publish this material in my column. Click here to order a copy of the book. 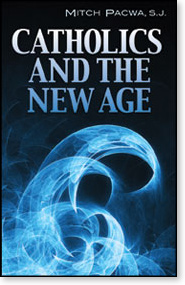 A campus chaplain at a Catholic university recommends crystals, the energy source of Atlantis, for personal help.

A Catholic women's college offers workshops in Wicca (witchcraft) and the goddess within. Astrology columns appear in the school paper....

A Chicago parish hosts a professional astrologer to lecture on the stars and inform parishioners were they can go for further astrological consultations.

A catechist objects to her required textbook because it uses the term "mantras" for Catholic aspirations. The pastor demands that she call these prayers mantras or else be fired. She is fired.

Father Justin Belitz, O.F.M., advertises retreats on the Tao Te Ching to teach "passive meditation," the "most valuable and important kind of mental prayer." The retreat promises to help one come "in contact with the Divine Presence in you, so that infinite peace, deep joy, all knowledge and wisdom, can flood your life and give it true meaning."

What are Catholics to make of all these New Age practices at parishes, retreat houses, universities, and colleges? Why are they attracting so many Catholics today, especially clergy and religious? Are these practices legitimate expressions of spirituality for Catholics? Or do they run counter to the Catholic faith?

This book approaches these questions and issues autobiographically because I, like so many contemporaries in the 1960s and 1970s, dabbled in occult practices now called New Age. Studying the psychology of Dr. Carl G. Jung brought me into involvement with practices like the I Ching and astrology. Jung used the occult in a scientific way. Why could I not use it to? Before long I found myself dabbling in astrology, the enneagram, and Eastern meditation. And I was a Jesuit seminarian studying for the priesthood!

But before I describe my own journey into and out of the New Age, we need a working definition a short history of the movement.

What is the New Age Movement?

I propose a concise and dense definition here, with an explanation of each point in the following paragraphs. NAM (shorthand for "New Age Movement") is a loosely structured, eclectic movement based on experiences of monism that lead people to believe in pantheism, with a tendency to hold millenarian views of history. We can take this definition apart to see exactly what it means.

First NAM is loosely structured, with no evidence of a highly organized affiliation or association. Some authors, notably pioneers of Christian research into NAM (Constance Cumbey, Texe Marrs, and Dave Hunt) apparently believe that NAM is a conspiracy to take over the world. Certainly some New Age authors describe an "Aquarian Conspiracy" in a mass awakening of consciousness in the world. They would like to believe they are the unstoppable trend of the future....

The New Age Movement is not a cult per se. Some New Age cults exist, but the loose organization of the movement prevents it from being a true cult. Cults depend on leaders who claim absolute (sometimes divine) authority over the lives of their followers. Their messages derived from direct contact with gods and spirits or from their own divine nature. People outside the cult system cannot be saved until they join the ingroup. Affiliation with the cult personality is more important his or her idea since the ideas change as the spirits lead them. This description does not fit most New Agers.

Instead of attachment to authority figures, New Agers usually desire ideas and practices to help them cope better with life. They are often too individualistic for cults, desiring the realization of their own personal divinity more than paying obeisance to some leader's divinity. Therefore, they tend to shy away from cultic organizations, though some New Age cults exist

Second, NAM is highly eclectic; borrowing ideas and practices from many sources. Meditation techniques from Hinduism, Zen, Sufism, and Native American religion are mixed with humanistic psychology, Western occultism, and modern psychics. New fads like crystals, rebirthing experiences, and sensory deprivation come and go. Individuals try various techniques (often called "psycho-technologies") and find that they do not provide what they promised. Instead of abandoning the New Age outlook, they try the next psycho-technology that promises health, enlightenment, greater brain power, or improved karma.

Many of the recommended experiences, from hallucinogenic drugs to yoga, Sufi dancing to breathing exercises, introduced the users to an altered state of consciousness (ASC). [The late] Marilyn Ferguson, author of the NAM "bible," wrote that "psychedelic drugs, however abused, had given a visionary experience of self-transcendence to if a sufficient number of individuals, so that they might well determine the future of human development — not a Utopia, but collectively altered state of consciousness."

Elsewhere she catalogues ways to change consciousness: "Deep inner shifts may occur in response to discipline contemplation, grave illness, wilderness treks, peak emotions, creative effort, spiritual exercises, controlled breathing, techniques for 'inhibiting thought,' psychedelics, movement, isolation, music, hypnosis, meditation, reverie, and in the wake of intense intellectual struggle." She connects yoga in monism in saying: "All souls are one. Each is a spark from the original soul, and the soul is inherent in all souls.... Yoga literally means the 'union.'"

Such expansions of consciousness tend to break down the boundaries between the individual and the world. One no longer feels isolated but united with everyone else, with the universe, and with divinity. A belief in the oneness of everything that exists is called monism, the third element in our definition. It is absolutely essential to keep in mind that New Agers do not come to their monistic belief through philosophical reasoning as much as through the experience of altered states of consciousness (ASCs). Since experience rather than theory grounds it, no one can deny that it happened. Other people merely reject the interpretation of the experience as proof that everything is one by denying that ASCs, instead of normal, shared, reasonable consciousness, are the norm for judging human experiences.

Once New Agers experience everything as a monistic unity, they raise the question: what is the nature of the one reality of the universe? Most, though not all, New Agers believe that universal One is God. Everything that exists is divine and shares in the divine nature. This is pantheism, the fourth element in our definition of NAM. New Age literature tends to focus more on the divine nature of human beings than on the divinity of animals or minerals. As an example, Shirley MacLaine writes, "Each soul is its own God. You must never worship anyone or anything other than self. For you are God. To love self is to love God."....

This leads to the last element in our definition of NAM: millennialism. The movement gets its name from millennialism since they expect a new age to begin with the new millennium. Usually they identify it astrologically by calling the Age of Aquarius. They believe that the last 2000 years were dominated by the sign Pisces (the fish), symbolizing Christianity. The new age of Aquarius (the water-bearer) will be a time of peace and enlightenment....

NAM absorbs notions from various sources like Oriental religions, Western occultism, modern science, and humanistic psychology. Let readers beware: New Agers transform these sources, usually by popularizing them. It is not Hinduism and Buddhism, but Americanized versions of them which are taught. They include scientific opinions and psychological therapy is compatible with NAM worldview and offer simplified versions of them for general consumption. New Age beliefs are combined with the ideas of Carl Rogers, Abraham Maslow, Carl Jung, and other psychologists. One's shadow personalities, archetypes, and need for freedom are taught in Catholic retreat houses and business seminars alike. Workshops promise greater creativity through contact with the goddess within and psychological wholeness through recognition of Myers-Briggs or enneagram personality types....

How Should We Respond?

I am confident that Catholicism has the resources to challenge NAM's worldview with God's alternatives. Our faith proclaims the good news that God loves us so much that he sent Jesus Christ, God incarnate and the Redeemer of the world's sin through his death and resurrection. It is a whole view of life, death and the afterlife. The more we live our faith and understand it, the better we can discern what is true and false about NAM. Today the weak link is the lack of understanding of our faith. We need to shore up our knowledge of Scripture, church history, theology, and Christian morals. Yet this knowledge should never be disassociated from living the faith, making it strong in our personal lives.

Because our faith holds together so well, it can integrate science far better than NAM's creation of new mythologies. C.S. Lewis even proves the illogic of believing in science without faith in God in his book, Miracles: A Preliminary Study. Furthermore, physicists and other scientists have serious criticisms of the often simplest theories proposed by New Agers. Familiarity with science takes work, but it is worth the effort to be able to debunk astrology, the misuse of right-brain versus left-brain neurology, the existence of extraterrestrials, unidentified flying objects, and other speculations

I bought into many ideas and practices which are now termed New Age during my college years — and I regret it. Yet God's grace, good advice from Jesuit brothers, solid theological and philosophical reasoning, and help from scientist friends combined to lead me back to a lively faith in Christ. I invite readers involved in the New Age Movement to steer their way out of these deceptions as well. Catholics who are not involved in it can learn how to lead others out of its traps. See my last chapter for some tips. We cannot cover every possible aspect of the New Age for Catholics in this book, but we can learn from my mistakes and get a start by identifying and understanding some key points of NAM's teachings....