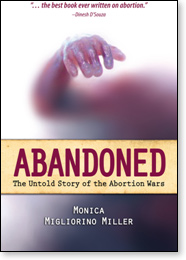 "Quite simply, this is the best book ever written on abortion. Beautifully written, this is about the consequences of Roe v. Wade, as seen through the eyes of one woman, who tells a clear and compelling story with passion but without fanaticism. On a subject that is often heavy and depressing, this is a hard-hitting yet compassionate and moving book. Honestly, I wouldn't have thought such a narrative could be done, only now it has been done."

To purchase Abandoned, click here. (For a limited time, advanced orders will save 35 percent.)

Below is a substantial excerpt from the book's prologue. Thanks to Monica Migliorino Miller and Rick Rotondi of Saint Benedict Press for allowing me to reproduce the excerpt in this column.

'The Story I Have to Tell'
When I was nine years old I made a peace treaty with the animals. I wrote it out on a sheet of wide-ruled notebook paper — the kind of paper used by a grade school student. Attempting to make the lettering as fancy as I could manage and using a ball point pen rather than a pencil, I intended the treaty to be permanent. The treaty was a perpetual commitment that I would never harm an animal as long as I lived. After writing out my pledge, I punctured my finger with a pin and signed the treaty in blood, thinking treaties were signed that way. I rolled it up as if it were composed on the finest parchment and tied a piece of red ribbon around the scroll. I even crumbled the paper slightly to make it look old as most important documents seemed worn in appearance. I placed the sacred document in a cigar box where most of my precious possessions were secretly stowed. Eight months later I lifted the lid of the box, rolled open the scroll and wrote:

I Monica do hereby and on this 10th day of July in the year1962 re-ratify this treaty for the reason that I killed an animal. Kind of animal: Snail Reason: Reproduction I do from this day forward promise never to harm another animal.

I then signed my name in pen since it seemed to me that the solemnity which attended the first signing in blood could not be repeated. I had killed a very small snail in my aquarium because, whether it was true or not, a school-girl friend had told me that snails reproduce on their own and soon my whole aquarium would be overrun with them, crowding out the angel fish and gouramis. So that little snail had to go. In my quest to rid the sea world of this menace I forgot all about the treaty only to recall a few days later, to my horror that I had made such a pact and had now shamefully broken it. There was nothing else to do but re-ratify the document and start again.

As I got a bit older I eventually gave up on the treaty, noticing that I swatted flies and mosquitoes and occasionally trampled on ants. The treaty was a lofty ideal but totally impractical in the real world.

However short-lived my official peace treaty with the animals was, it nonetheless indicated an early sensitivity toward living things.... 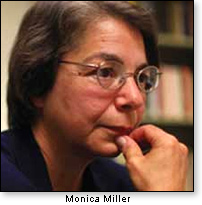 Even in adulthood this sensitivity toward living things stayed with me. Seeing a stray cat, I feed it. Coming across a dead dog on the side of the road, I bury it. Most insects can live in my house with impunity, and those I wish to be rid of are simply scooped into a napkin and placed safely outside.

Once, while walking through a field in the dead of winter, the grass and bushes covered with snow, I came upon the bloody footprints of a rabbit. Obviously there was a wounded animal out there somewhere that needed attention. My dear friend Edmund — who would one day become my husband — was with me, and together we followed the red trail on the white snow. For over an hour we diligently followed the path it made, but the animal was not to be found alive or dead and we at last gave up the search.

The seeds laid in childhood sprang forth later in life. My defense of animal life in childhood matured into a deeper defense of life in adulthood. And this is the story I have to tell. As it turned out, I threw myself into the defense of a people nobody wanted, the unborn marked for abortion.

This story begins in 1976, the year I became aware of something called the "Pro-life movement" and takes the reader through 1994 — the year that the anti-abortion clinic blockades basically came to an end, an activity that I pioneered, for which I went to court, and for which I served time in jail. Thus this story is a slice of time — an important episode in the history of the anti-abortion movement seen through a narrative microscope. Here you will be taken to the dark places and see things very few people have beheld. You will also be taken to the high places, full of light, when babies were saved and the truth about the dignity of the human being was recognized. Certainly, I expect those who are already active in the pro-life cause, to be attracted to this narrative. This is one of the rare books that presents the issue of abortion through the experience of those who are engaged in the anti-abortion struggle. But I believe that this story will be helpful to those outside the movement, as they will be introduced to pro-life people, see what we did, why we did it, and perhaps, even should they support legalized abortion, come away with a more profound understanding of what is at stake in the abortion war.

As this prologue is written, Barack Obama is the president — a supporter of legalized abortion. Someone else will take his place, but the battle over legalized abortion will continue. After nearly forty years of controversy, it appears that the war over abortion will not come to a quick and easy end. My hope is that this book will shed a light on one of the most desperate moments in the history of the world — a moment in which we have before us that great struggle over life itself and the meaning of human existence.