October 1, 2012
Excerpts from a very good piece by Dr. Jeff Mirus of CatholicCulture.org:


In the United States, throughout my entire lifetime, there have been only the most modest of effective differences between the candidates fielded by the two dominant political parties. Despite differences in rhetoric, there never seems to be a great deal of difference in the long-term direction of their ultimate policies. Government continues to grow, regulations become continuously more burdensome, the waste of material and human resources increases apace, personal morality erodes, social stability declines. Policies denounced by the loyal opposition are typically endorsed and continued once the opposition gains power, only to be denounced in turn by the dispossessed original party....

The unworldly are generally a small and ineffective minority: Those who are willing to embrace the self-denial necessary to form themselves in truth, obey the natural law, and respond to God in sacrificial love are generally a small minority. They are called to be an important and vital leaven, but they will seldom be more than that. Their political victories will most often occur only when what is right can be shown to correspond to a widely understood self-interest. Thus moral progress in the social order is actually most likely under the pressure of disasters which demonstrate the bankruptcy of old attitudes and habits....


Click here to read Dr. Mirus' commentary in its entirety.

Click here to read a very good column on the morality of the Democratic and Republican Party platforms by Bishop Thomas Paprocki of Springfield, Ill.

Click here to read the results of a religious freedom survey conducted by Father John Waiss, associate pastor of St. Mary of the Angels Parish in Chicago.


On October 4, we give thanks for one of the best known and least known of all saints. Least known, that is, because Francis of Assisi was not a garden gnome, or a doe-eyed hippy skipping with animals and hugging trees. Garden gnomes do not bear the Stigmata of Christ's wounds.

A vegetarian? He berated a friar for wanting to abstain from meat on a feast day and said that on Christmas he would 'smear the wall with meat.' 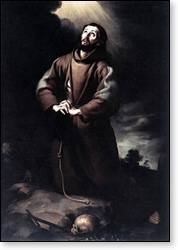 An iconoclast? He was meticulous in the ceremonials of the Mass, insisting that every sacred vessel and vestment be the best, and his Rule dismissed any friar who parted from the Pope on the slightest article of Faith.

A pacifist? He joined the Fifth Crusade, simmering ever since eleven thousand Muslims had invaded Rome and desecrated the tombs of Peter and Paul in the year 846. Francis went to North Africa in 1219 to convert the Muslims and confronted Sultan al Malik al-Kamil, who had just slaughtered five thousand Christians at Damietta. Francis fearlessly told the Sultan: 'It is just that Christians invade the land you inhabit, for you blaspheme the name of Christ and alienate everyone you can from His worship.' While counselors called for the beheading of Francis according to Muslim law, the Sultan was so taken with the humility of Francis that he only had him beaten, chained and imprisoned, and then he released him....


Click here to read an interesting article on the finances of the liberal hate-spewing Southern Poverty Law Center.


From the Sisters of Children of Mary:


Our community has just made a short video about contraception. After watching it, Father Peter Stravinskas' reply was, 'Superb.' Our spiritual advisor thinks it can do a lot of good if we can get it out.

If you or anyone you know may be interested in helping with this, call or email us. We want to get it out as soon as we can before the election. We just spoke to Father Wilson and he mentioned the swing states, so we will be addressing those states first.