Matt C. Abbott
Opposing Obama in Romney, W.Va.; 'Letters Between a Catholic and an Evangelical'

Get this: The ad was produced by "Pro-Life Candidates," whose mailing address is in Romney, West Virginia.

A mere coincidence, I'm sure.


Father John R. Waiss, associate pastor of St. Mary of the Angels Parish in Chicago, co-authored the book Letters Between a Catholic and an Evangelical: From Debate to Dialogue on the Issues That Separate Us, the prologue of which is reprinted below.

(Father Waiss is a priest of Opus Dei. For those who care to know, I'm not a member of Opus Dei. However, I do make my confessions to, and seek spiritual direction from, a few Opus Dei priests, as well as the priests of the Canons Regular of St. John Cantius, who are not affiliated with Opus Dei.)


Letters Between a Catholic and an Evangelical

John R. Waiss
James G. McCarthy
How to Enrich Your Reading of This Book

The authors suggest you begin by reading the Authors' Prologue. It will help you understand who they are, their purpose in writing, and the format of this book. You then have two choices: You can read the book straight through, following the events in their lives during the two years during which the book was written. Or, if you prefer, you can begin with those topics that are of greatest interest to you. The table of contents will help you in your selection. On crucial issues, take the time to look up references to the Bible and the Catechism of the Catholic Church and read them in context. Finally, each time you pick up this book, begin with prayer, asking God to help you to know the truth. Pray also for the authors, that they may resolve their doctrinal differences and come to worship the one Lord together.

References to the Bible and the Catechism of the Catholic Church 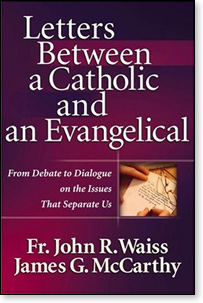 Except where otherwise indicated, all Scripture quotations are from The Holy Bible, Revised Standard Version (RSV), a translation accepted by Protestants and Catholics. References to the Bible are in the form Genesis 1:3, meaning the book of Genesis, chapter one, verse three. In this book, bracketed text within Bible quotations indicates a comment added by one of the authors. Text in italics indicates added emphasis.

Though both Protestants and Catholics recognize the same 27 books of the New Testament, there is some disagreement concerning the books of the Old Testament. The Catholic Church recognizes seven additional books in the Old Testament (Tobith, Judith, First and Second Maccabees, Wisdom, Sirach, and Baruch). The Catholic Church refers to these as the Deutero-Canonical books. Protestants refer to them as the Apocrypha and do not consider them part of Scripture.

At the Last Supper, Jesus prayed:


I do not pray for these only, but also for those who believe in me through their word, that they may all be one; even as thou, Father, art in me, and I in thee, that they also may be in us, so that the world may believe that thou hast sent me. John 17:20-21


Though essential to our Christian witness, unity has eluded Catholics and evangelicals. It is quite challenging to dialogue charitably with another who strongly believes he is in the truth. However, it is possible.

Jim and I have spent hours together discussing our faiths. With God's help, we never argue. Occasionally something is said that triggers intense emotions, as though one were being personally attacked. However, after listening calmly, we have found that the Holy Spirit enlightens us to the real issues along with the necessary light to respond. Our discussions remain friendly and civil, largely due to our mutual love and respect for Scripture and our desire to seek, find, and witness to the truth. This unites us and is the foundation of our exchange.

Our dialogue began in the early 1990s. I was leading an evangelical ministry called University Christian Fellowship at the University of California, Berkeley. It was there that I met Dave, a history student with a keen mind. He was also an enthusiastic Catholic. Dave and I discussed some of the differences between Catholics and evangelicals, such as the place Mary has in the lives of God's people. Since I was in the process of writing a book on Catholicism, later published as The Gospel According to Rome, I asked Dave for his opinion of the chapter on Mary.

At the time, I was the Catholic chaplain for Garber House, a Berkeley residence of Opus Dei that helps college students integrate their faith into their daily life. After reviewing Jim's manuscript with Dave — a Garber House resident — I suggested he might invite Jim over to talk. Frankly, I didn't expect Jim to accept, but to my delight he did.

Thus began our series of discussions, held at Garber House or at Jim's home over dinner. There I met his wife, Jean, and their three daughters — Elizabeth, Faith, and Grace. Often Jim's friends and colleagues would join us for our discussion.

Though now living miles apart, we have maintained our friendship through letters and occasional visits. Presently, John serves as the chaplain of an Opus Dei center for men and another for women near the University of California, Los Angeles. I am an elder of an evangelical church in San Jose, California, serving in pastoral and teaching ministry. It was during a visit to our home in the summer of 1999 that I first suggested to John the writing of this book. What I had in mind was that we would restart our discussions and put them in writing through an exchange of letters. John was immediately interested, having been thinking of something similar.

Long before we began this project, it had been my hope and prayer to bring Jim and his family home to the Catholic Church. Whether this happens or not, perhaps our exchange can benefit others — Catholics and evangelicals — and help us not only to understand what each other believes, but to learn to listen to opposing beliefs with respect and charity, praying and growing in love for one another.

I welcome this opportunity to explain Catholic teaching, to show its unique and complete consistency with Scripture, while dispelling any misconceptions or stereotypes of Catholicism. Jim, in turn, will try to show the exclusivity of his interpretation of Scripture. Without a common recognized authority to authenticate one interpretation over another, this seems the most respectful way to treat our differing beliefs; may it bear fruit in leading us to the truth.

In addition, I want to apologize ahead of time if I have offended Jim or any readers; pride can be a barrier, preventing me from fully listening, understanding, or respecting Jim or his beliefs. This opposes true Christian dialogue. Also, forgive me for times I do not fully challenge Jim with a proper account of my faith, either by my behavior or inadequate explanation. My dialogue with Jim has taught me a lot; may I continue to learn, especially to love as Christ loves. I trust the Holy Spirit will overcome our inadequacies and lead us to truth (2 Thessalonians 2:13) and unity in Christ (Ephesians 4:3).

I also welcome the opportunity this book provides for John and I to discuss our faiths in the public arena. We hold some beliefs in common, as our letters will reveal. We strongly disagree on others, some foundational to the Christian faith. Though at times our debate has grown intense, I have always found John to be a gentleman, soft spoken, and a patient listener. Though we remain on opposite sides of a dispute of great importance, I have grown in my respect for him and value his friendship.

I will be presenting my beliefs as an evangelical Christian. Evangelicals attend a variety of churches but share a common core of beliefs:
A recent study by the Barna Research Group estimates that eight percent of Americans are evangelicals. That is about 14 million people. Worldwide, there are reportedly 214 million people who identify themselves as evangelicals. Most of these are in Protestant churches linked to formal evangelical alliances such as World Evangelical Fellowship.

I will present the Catholic position. Catholic (a Greek term meaning universal) was added to Christian when heretical sects developed particular beliefs differing from the totality of what Christians had believed in every time and place. By the early second century, Catholic became a common term for all orthodox Christians: "Where there is Christ Jesus, there is the Catholic Church" [CCC 830].

A Catholic must believe, at least implicitly, all (universal) that the Catholic Church teaches, as detailed in the Catechism of the Catholic Church. A true Catholic cannot be a "cafeteria" Christian, picking and choosing what he wants to believe. Such a Catholic, as well as one who ceases going to church or living out his faith, has begun losing his Catholic identity.

Approximately half of the two billion Christians worldwide identify themselves as Catholics, and about 60 million of these individuals reside in the United States. For a Catholic, I am fairly evangelical in my approach, turning to Jesus Christ and His gospel (evangelium) for the roots of Catholic teaching. If we were to remove the words alone and supreme from Jim's list of core evangelical beliefs, I could agree with every one of them: God's grace saves us through Christ's crucifixion, is accepted by faith, and is applied to us by baptism and manifested in works.

The format we designed for this book emphasizes the positive presentation of our beliefs. We address six topics, each a major area separating Catholics and evangelicals. We exchanged ten letters on each topic, and limited the length of the letters to keep things moving. This means we were unable to respond to every issue raised. We also conducted two tape-recorded conversations on each topic in which one of us asked questions of the other. A portion of these questions were submitted to the other in advance.

February 2000 — after refining the format of this book — we began our correspondence. Neither of us realized at the time the direction our discussions would take us. This much we did know: Each of us was going to try to convert the other — in a friendly way, of course.


(Letters Between a Catholic and an Evangelical
Copyright © 2003 by John R. Waiss and James G. McCarthy
Published by Harvest House Publishers
Eugene, Oregon 97402)