Contraception includes condoms and birth control pills, but there are other, longer-term methods that are effective and reversible: Intrauterine devices and implants. 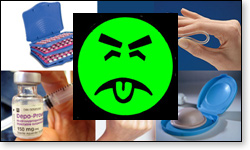 A new study in the journal Obstetrics and Gynecology set out to see what would happen if these methods were given out at no cost. The study incorporated more than 9,000 girls and women at risk for unintended pregnancy. Researchers found that teen births within the group of women who were part of this program was 6.3 per 1,000, which is much lower than the national rate of 34.1 per 1,000.

'We already spend $11–12 billion on unintended pregnancies in the U.S., and I bet that money could go very far to provide contraception for many women in the U.S.,' said Dr. Jeffrey Peipert, lead study author and researcher at Washington University in St. Louis School of Medicine.

Peipert and colleagues also found that the percentage of abortions that were repeat abortions was lower in this group of participants than in the St. Louis region in general, and the national average, during 2008 to 2010. The study intervention appeared to prevent one abortion for every 79 to 137 women who participated....

These longer-term options should be covered under insurance plans under the Affordable Care Act [Obamacare], although it remains controversial whether religious-based insurance carriers must provide contraception....


I asked Chris Kahlenborn, M.D., Anthony Caruso, M.D., and Brian Clowes, Ph.D., to comment on the aforementioned study and its promotion in the mainstream media. Their responses (slightly edited) are as follows.


Dr. Kahlenborn, who's featured this week in a series of interviews on EWTN titled "The Misogyny of Women's Health Care," wrote:


I find it disturbing that after nearly 50 years, both the media and the medical establishment have failed to give a true airing to one of the pill's most dangerous side effects, namely, that 'dirty little secret.' What's that? One need only check the Mayo Clinic Proceedings — the major medical publication of the Mayo Clinic — to find our little-known study, which showed that the pill increases the risk of premenopausal breast cancer substantially when taken at a young age (see Mayo Clinic Proceedings: October 3, 2006).

In October 2006, we reviewed the medical literature and combined data in an analysis (referred to as a meta-analysis): We found that 21 out of 23 studies showed that using oral contraceptives prior to a woman's first birth resulted in a 44 percent increased risk in premenopausal breast cancer. Our meta-analysis remains the most recent study in this area and updates the previously analysis (the Oxford analysis published in 1996), which relied on older data with older women (two-thirds of whom were over age 45); unfortunately, the Oxford study continues to be quoted by ACOG, textbooks, the National Cancer Institute, the American Cancer Society and most researchers and obstetricians, claiming that oral contraceptives carry little breast cancer risk especially 10 years after last use.

I continue to be amazed at the discordance between the medical literature and public/medical awareness. To my dismay, after our meta-analysis was published, the Mayo Clinic sent out a press release to all major media in the country. The response? ( ). The blank space between the parentheses is purposeful.

In addition to our meta-analysis, it's important to note that the World Health Organization classified oral contraceptives as a Class I carcinogen in 2005 — the most dangerous classification. Even more data has come forth recently in a paper by several researchers — one of whom is a major researcher of the National Cancer Institute — which not only cited our meta-analysis, but found that oral contraceptives increase the risk of triple-negative breast cancer in women under 40 by 320 percent (triple-negative breast cancers are extremely aggressive).

Few in the medical establishment or the public are aware of this data, or if they are, young women almost never hear about them. It's been almost four years since the publication of our study in the Mayo Clinic Proceedings; I am beginning to think that our study has been effectively 'buried.'

Breast cancer and the pill — that dirty little secret? Some day perhaps someone in the media and/or medical establishment will dust a little dirt off those pink ribbons and let young women hear all the facts so they can finally make truly informed decisions.


There have been a couple of articles that have been published lately that lead to the one recently commented on by CNN. The saddest part of the story is that rather than a study teaching the benefits of periodic abstinence and the benefits of natural family planning, that we now promote the complete dissolution of the true purpose of the conjugal act. This is the third of three reports that begin to show this. The first touted the effectiveness of long term forms of contraception in stopping unwanted pregnancy. The second promotes the use of long-term contraception in girls as young as 14-years-old. And now, the idea that providing these devices for free will cure the problem of unwanted pregnancy completes the trilogy. 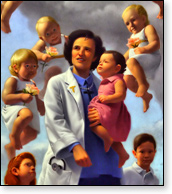 The fact that 46 percent of all pregnancies are unwanted is very sad, but it reflects the effects of the culture of death in another way. It is one thing when we attempt to commodify the conjugal act by using voluntary forms of contraception. Now we are seeing the development of a 'set it and forget it' position designed to allow the enjoyment of sex without the consequence of pregnancy. However, just as the onset of the use of contraception in the 1960s has led to an increase in sexually transmitted diseases and cervical cancer, removing the fear of pregnancy almost completely (failure rates 20 times lower than the eight to nine percent failure rate of the pill) may see an concomitant increase in these other unintended consequences. The fact that one of the outcomes was the reduction in teenage pregnancy shows that we are continuing to give up on teaching and demonstrating the benefits of sexual morality and the primary prevention that comes from avoiding premarital sexual activity, and moving towards the idea that 'Everybody does it, so it's OK' and, instead, avoiding the consequential 'disease' of pregnancy.

It is interesting that one of the measures is the reduction in repeat abortions, and that they saw that they found that the majority of abortions result from untended pregnancies. So in response to pro-life forces, they can demonstrate that if we just give in on this measure, that the resultant reduction in abortion would be the culmination of the infamous statement that abortion should be 'safe, legal, and rare.' That is the saddest part of it. We cannot give up on our kids and re-establishing the culture of life.

As usual, the family planners stress only the most favorable results of their studies while neglecting the larger issues. Of course getting girls and women onto the longer-acting birth control methods will cut down on surgical abortions; but they will lead to many more physical complications (especially among teenagers) and an accelerated spread of STIs, against which none of the longer-acting methods protect.

Not to mention that, according to their patient information inserts, all of the longer-acting methods sometimes act as abortifacients, killing the newly-conceived human being, which will actually lead to an increase, not a decrease, in total abortions.