Recently I saw a newspaper item that troubled me deeply. I'm asking you [directed to the reader's friends] to write to the governor of Pennsylvania to ask for clemency for Terrance 'Terry' Williams, currently on death row. I've never written about a thing like this before, and I'm not opposed to the death penalty in all cases. But I believe Williams in no way deserves this awful punishment. 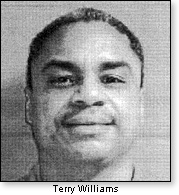 Williams is facing execution for fatally beating Amos Norwood with a tire iron in 1984 (when Williams was a teenager); however, federal public defender Shawn Nolan wrote in a petition that 'Williams and the victim ... were involved in a conflicted sexual relationship in which Norwood paid teenaged Terry for sex. Norwood escalated the violence of their sexual encounters, despite Terry's attempts to stop [it].'

Williams also says he had been physically and sexually assaulted throughout his childhood and gang-raped at a juvenile facility. Defense lawyers contended that newly discovered evidence of Norwood's sexual orientation supported their claim that Williams, who was 18 at the time, killed Norwood because Norwood, who was 56, had abused Williams from the age of 13 — not because of a robbery, as prosecutors argued at the trial.

According to The New York Times, just before Williams' scheduled execution in October, Judge M. Teresa Sarmina of the Philadelphia Court of Common Pleas issued a stay and ruled that Williams should be spared. The judge said prosecutors had withheld evidence from the defense showing Norwood had homosexual relationships with minors, including Williams. Such evidence, the judge ruled, could have led the jury at Williams' 1986 trial to vote for a penalty other than death.

I believe Williams' sentence should be reduced to life in prison because:

Today, in fact, as a consequence of the possibilities which the state has for effectively preventing crime, by rendering one who has committed an offense incapable of doing harm — without definitely taking away from him the possibility of redeeming himself — the cases in which the execution of the offender is an absolute necessity 'are very rare, if not practically non-existent.'


I agree that Terry Williams should get his death sentence commuted to life in prison (without parole).