January 23, 2013
So here we are ... 40 years after Roe v. Wade and Doe v. Bolton. Well over 50 million lives lost to abortion; virtually no prospect of overturning Roe in the foreseeable future; a majority of Americans who are uncomfortable with, and even desire certain restrictions on, abortion, yet don't want to see it outlawed; a bunch of libertine politicians that merely reflect a libertine culture; and too few church leaders willing to "talk the talk and walk the walk" (canon 915, anyone?) in regard to promoting a culture of life.

OK, now that I have the negativity out of my system (not really), I would be remiss if I made it appear that the pro-life movement hasn't accomplished anything in these 40 years. Click here to read about some of the accomplishments, courtesy of Eric Scheidler, executive director of the Pro-Life Action League.

The screening information is as follows:


Those interested in attending one of the above screenings should RSVP to DoonbyEvents@gmail.com as soon as possible.

Doonby has received favorable reviews from Father Gianfranco Grieco, office head of the Vatican's Pontifical Council for the Family, and Richard Land of the Southern Baptist Convention. Click here and here to see trailers of the film. 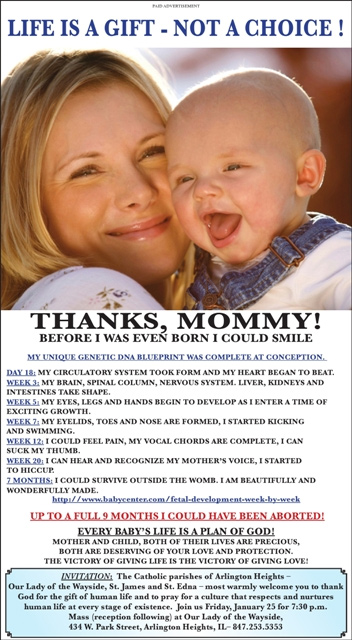