January 28, 2013
Below are excerpts from the first chapter of the book Meet Mary: Getting to Know the Mother of God, by Dr. Mark Miravalle, professor of theology at Franciscan University of Steubenville.

Thanks to Sophia Institute Press for permitting me to reprint the excerpts in this column. Click here to order a copy of the book in paperback or in electronic format.

Be It Done Unto Me

Mary in the Bible and the Early Church 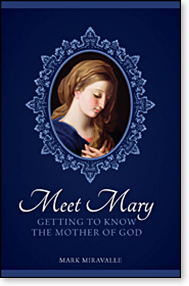 So, who is this woman who has had cathedrals named for her, poems written about her, and battles fought in her honor? Who is this Mary?

Of the details of her life, we know little. Much of what we do know was recorded in the pages of the New Testament and passed down through the oral tradition of the early Church. Written on scrolls of parchment and the walls of the catacombs, this history gives only the briefest sketch of the woman who brought Jesus into the world.

The glimpses into her life and character that we do get, however, are rich with significance, which is exactly why millions of men and women through the centuries have found in her a model of holiness, a companion in suffering, and, above all, a mother of their own.


Mary in the New Testament
In the pages of the New Testament, we have the oldest historical record of Mary's life. Almost all that we know of her earthly existence we know from the four Gospels, which were written sometime between 50 and 100 AD, along with the oral tradition passed on by the first Christians.

We know she was raised in Galilee, one of the most remote corners of one of the most remote provinces of the ancient Roman Empire. We know that when she came along in approximately 14 BC, Israel was governed by Herod, a sadistic and power-hungry king who ruled at the pleasure of the emperor in Rome. A representative of that emperor, the governor, also sat in Jerusalem, supervising the soldiers, keeping an eye on Herod, and putting down the periodic rebellions that sprang up among the Jewish people.

We also know that Mary was Jewish, a member of a people that had been persecuted, enslaved, exiled, and oppressed for thousands of years, yet who continued to worship the God of its ancestors and to reject the polytheism of its oppressors. We know that she married a carpenter named Joseph, gave birth to a son named Jesus, watched her son become a man, and later watched him die on a cross.

The most detailed written information we have on Mary's early life and relationship with her son comes from the Gospel of Luke. Luke, more so than any of the other Gospel writers, was concerned with giving an in-depth history of Jesus' life, so he included more detailed information about Jesus' early years than the others did. In his Gospel, there are five key events in Christ's early life that involve his mother....

With one or two exceptions, that is all the New Testament has to say about the mother of Jesus. Yet those few passages, coupled with the oral faith and life of the Church of Jesus and his first apostles and disciples, are the foundation of what the Catholic Church teaches and believes about Mary; the seeds from which fully formed doctrines would emerge. We'll explore the relationship between the seeds and their blossoming fruits in the next chapter, but for now, let's sum up the key Marian themes that emerge in the New Testament.

Mary's miraculous motherhood: Although Mary is really and truly Jesus' mother, she is a mother like no other. The child born of her was conceived virginally; he had no man for a father. So, from the beginning, we get a rather strong indication that Mary's relationship with God was a bit different from most women's (or men's).

The unity of the mother and child: This theme is particularly evident in Matthew, where, in the first chapters, the two are almost never mentioned more than a breath apart.

Mary's suffering: Being the mother of the Christ is no easy job. Her midnight flight into a strange land, the warning of a sword piercing her soul, and her presence at the foot of the Cross while her son dies an agonizing death give us a glimpse of the sorrows she endured in her lifetime.

Mary as "Woman": On two occasions, we hear Mary referred to not by her name or her relationship with her son, but simply as "Woman." This is not a token of disrespect, but is done expressly to highlight the role she plays in salvation history.

We'll see how, when we explore all of those themes in greater depth in the next chapter. But before we move on to look at Mary's role in the early Church, we need to look backward, to the books of the Old Testament.


Mary in the Old Testament
"The Old Testament?" you ask. "Mary wasn't even born until generations after the last book of the Hebrew Scriptures was written."

When we look back through the pages of the Old Testament, we find all sorts of hints about what was to unfold in Israel's history, about the coming of the Christ, and about the establishment of a new type of kingdom. We also find hints about the woman who would give birth to the Christ and what her role in his kingdom would be. This is exactly why we're looking back through those pages for a deeper understanding of Mary....


Mary in the Early Church
The authors of the New Testament focus the overwhelming majority of their attention on Jesus and his ministry, not on his mother. The reasons for this are obvious: Jesus is God, Mary is not.

If Christ's divine nature and primacy were not clearly and solidly established, devotion to his mother would make no sense; worse, it could morph into the type of goddess worship so common in the ancient Near East.

The same principle held true for the early Church. Establishing Christ's primacy had to come first; otherwise their claims to be the very Body of Christ, would sound like lunacy. Yet even so, we still find acknowledgment of and devotion to the mother of Jesus from apostolic times.

The oldest historical evidence we have of Marian devotion among early Christians comes from the catacombs. These tombs of the Christian dead, scattered throughout the Mediterranean world, bear witness to their affection for Mary, their hope in her intercession, and their confidence in her place in heaven. As early as the end of the first century after Christ, they began including Mary in frescoes on the walls of the Roman catacombs. At times she is shown with her son; at other times she appears alone. Common images include Mary as the model of virginity and Mary as the orans – the woman at prayer. Scenes of Mary at the Annunciation and the Nativity are also on the walls....

Then, within about a hundred years of Jesus' death, the leaders and teachers in the early Church had come to describe Mary as "the New Eve." What did they mean by this?

In Genesis, when Adam sinned, he did not sin alone. His wife disobeyed God before he did and then tempted him to disobedience as well. Man fell from grace, and Original Sin entered his nature because of Adam's sin, but Eve had played an instrumental role in that Fall.

So, too, with man's redemption. When man was given the possibility of being restored to grace and cleansed of Original Sin, that possibility came about through Christ's saving death on the Cross. But at the foot of that Cross was a woman, a woman who had made Jesus' death possible by making his life possible. With her yes to the angel Gabriel, Mary, like Eve, played an instrumental, albeit secondary role, in man's redemption.

St. Justin Martyr (d. 165), the early Church's first great defender of Christian teaching, made much use of this metaphor, describing Mary as the "obedient virgin" in contrast to Eve, "the disobedient virgin"....

The early Christians knew that the same woman who had rocked the infant Jesus to sleep, picked him up when he fell, and held his broken body in her arms could also be trusted to help them through their own trials, both spiritual and temporal. Their trust in and love for Mary was more than evident by 431 AD, when the Council of Ephesus – an authoritative meeting of Church leaders – formally defended her title as "Mother of God." Already, there were cathedrals dedicated to her in Rome, Jerusalem, and Constantinople, and after the council, devotion to Mary flourished even more in both the East and the West. Marian prayers, Marian liturgical feasts, Marian icons, and Marian paintings were soon everywhere in the Christian world.

The son's place had been secured, his Church established and fortified. And now, the seeds of truth about his mother, seeds foreshadowed in the Old Testament, planted in the New Testament, and cultivated in the early Church, could finally come to fruition. Nothing that came forth would or could in any way diminish the truth and glory of Christ. Rather, the fruits of authentic Marian devotion could only show more clearly, more beautifully, the possibilities offered to man by Christ's saving grace.