May 16, 2013
There's been some interesting news in the last several days involving the Internal Revenue Service (under fire for targeting conservative groups), abortion-infanticide (the trial of abortionist Kermit Gosnell), and breast cancer (an announcement by Hollywood actress Angelina Jolie).

Pro-life, pro-family groups targeted by the tyrannical IRS include the following (information courtesy of press releases):

Thankfully, abortionist Kermit Gosnell will be spending the rest of his miserable life behind bars. Good riddance. Too bad his fellow abortionists nationwide – and worldwide, for that matter – won't be joining him.

In an unrelated story, Hollywood actress Angelina Jolie announced via a May 14 op-ed in The New York Times that she opted for a double mastectomy, writing:

Once I knew that this was my reality, I decided to be proactive and to minimize the risk as much I could. I made a decision to have a preventive double mastectomy. I started with the breasts, as my risk of breast cancer is higher than my risk of ovarian cancer, and the surgery is more complex....


I've heard nothing about Jolie ever having had an abortion, but there is an abortion-breast cancer connection that the media have largely ignored over the years.

Angela Lanfranchi, M.D., FACS, wrote (click here for the article in its entirety):


There are many well established and well-known causes of breast cancer, such as inheriting a BRCA gene (a defective gene associated with increased breast cancer risk) and being exposed to oral contraceptives and hormone replacement therapy. There are lesser known risks of breast cancer such as cigarette smoking before a full term pregnancy and induced abortion. But just as only 15 percent of people who smoke will get lung cancer and only about 5–10 percent of women with breast cancer develop this cancer because they had an abortion, we should still advise the public of these avoidable risks, however small.

The vast majority of women with breast cancer have not had an abortion, but there are some women with breast cancer that have abortion as an attributable risk. Women need this information to make informed choices and to understand when to get screened for cancer if they are at increased risk, beginning approximately 8 to 10 years after the risk was taken...


On May 13, Pope Francis consecrated his pontificate to Our Lady of Fatima. Click here for the story.

The following is the prayer of consecration lead by Cardinal Jose Policarpo, president of the bishops' conference of Portugal (with an allusion to the third part of the secret of Fatima):


We, the bishops of Portugal and this multitude of pilgrims, are at your feet in this Cova da Iria, on this 96th anniversary of your first apparition to the little shepherds, in order to fulfill the desire of Pope Francis, clearly expressed, to consecrate to you, Virgin of Fatima, his ministry of bishop of Rome and universal pastor. Thus, we consecrate to you, Our Lady, you who are the mother of the Church, the ministry of the new pope; please fill his heart with the tenderness of God, which like no one else you yourself experienced, so that he may embrace all men and women of our time with the love of your Son Jesus Christ.

Today's mankind needs to feel loved by God and by the Church. Only feeling loved she will overcome the temptation of violence, of materialism, of forgetting God, of losing the direction towards a new world, where love will reign. Please grant Pope Francis the gift of discernment in order to be able to identify the ways to renew the Church; give him courage to follow, without hesitation, the ways suggested by the Holy Spirit; support him during the difficult hours of suffering; help him overcome, in charity, the trials he'll encounter while renewing the Church. Please always be at his side, whispering to his ear those words well known to you: 'I am the handmaid of the Lord; be it done onto me according to Thy Word!' 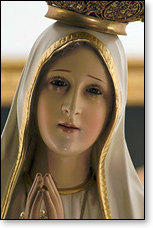 The ways of renewing the Church lead us to the rediscovery of the timeliness of the message you left with the little shepherds: the demand that we convert to God, Who has been so much offended, because we have forgotten Him. Conversion is always a return to the love of God. God forgives because He loves us. That is why His love is called mercy. The Church, protected by your maternal solicitude and guided by this pastor, ought to stand up evermore as a place of conversion and pardon, because in her the truth is always expressed in charity.

You have pointed out prayer as the decisive way towards conversion. Please teach the Church, of which you are a member and the model, to be, more and more, a people praying in union with the Holy Father – the first of this people to pray – and also in union with the former pope, His Holiness Benedict XVI, who chose the way of silent prayer, challenging the Church to embrace the ways of prayer.

In your message to the little shepherds here at Cova da Iria, you highlighted the ministry of the pope, the 'bishop dressed in white.' Three of the last popes came as pilgrims to your shrine. Only you, Our Lady, in your maternal love for the entire Church, can put into the heart of Pope Francis the desire to come to this Shrine as a pilgrim. This is not something one can ask for other reasons; only the silent complicity between you and him will make him feel attracted to this pilgrimage, being certain that he will be in the company of millions of believers willing to hear once again your message.

Here, on this altar of the world, he will be able to bless all mankind and make today's world feel that God loves all the men and women of out time, that the Church also loves them and that you, Mother of the Redeemer, lead them with tenderness through the ways of salvation.


Our Lady of Fatima, pray for us.