I've mentioned him a number of times in this column over the last several years. I was no fan of his, to say the least. He even sent me a cryptic email a while back.

Out of Christian charity, we should pray for his soul. But I do want to remind readers of the following excerpts in Father Greeley's non-fiction book Furthermore! Memories of a Parish Priest – something he never (to my knowledge) revealed while living: 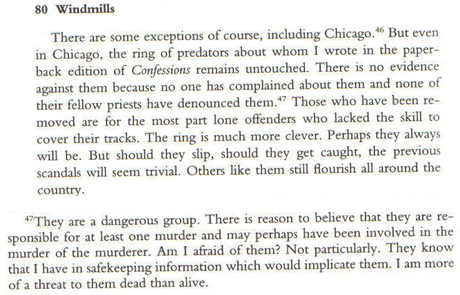 From Catholic World News (May 29):


The chairman of the National Review Board, a lay body that advises the U.S. bishops in combating clerical sexual abuse, has disputed a 2011 John Jay College of Criminal Justice study that found no link between homosexuality and clerical abuse.

A journalist said to Al Notzon III, who is ending his term as chairman in June: 'While the majority of clergy sex-abuse victims are post-pubescent boys, the researchers who completed the second John Jay Report concluded that same-sex attraction was not a significant factor in the crisis.'

Notzon replied: 'The majority of victims are still post-pubescent males ... When you hire an independent researcher [group], they reach their own conclusions. I don't agree with their conclusion in this instance – when 83% of cases are male on male.'


Good for Mr. Notzon for telling it like it is.

Click here to read "Homosexuality and the Church Crisis" by Brian Clowes, Ph.D., which begins:


Due to clergy sex abuse scandals centered primarily in the Northern hemisphere, the moral authority of the Roman Catholic Church has been subjected to an opportunistic siege by prominent individuals and organizations who see the chance to advance their goals, including the ordination of women and the suspension of the requirement for priestly celibacy.

There is also a strongly defensive element to this strategy. Opponents of the Church know that there is a well-documented and strong correlation between male homosexuality and child sexual abuse, but claim that there is no evidence supporting this connection.

And, of course, those who are currently attacking the Church hope that they can undermine its moral authority to preach on the sinfulness of homosexual behavior and weaken its opposition to ersatz homosexual 'marriage.'