Matt C. Abbott
The scandal isn't over; 'A Shepherd'; Pray for Michael Terry

September 28, 2013
Pope Francis will have his hands full, no doubt; the clergy abuse scandal still isn't over.

Several cases have made the news in recent days.

On a related note, Billy Graham's grandson is sounding the alarm about abuse among evangelicals.

According to a Sept. 26 story at Religion News Service:


The Christian mission field is a 'magnet' for sexual abusers, Boz Tchividjian, a Liberty University law professor who investigates abuse said Thursday (Sept. 26) to a room of journalists.

While comparing evangelicals to Catholics on abuse response, 'I think we are worse,' he said at the Religion Newswriters Association conference, saying too many evangelicals had 'sacrificed the souls' of young victims.... 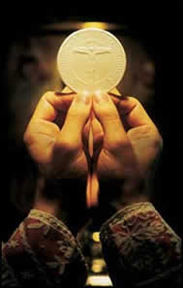 The hungry wolf is cunning
He scatters so he may devour
The priest must spot the beast
In all disguise, at every hour

You, pastor, are a servant
Given charge of their very souls
You must lead them to our Father
Even through agony untold

Lead them to the Father
In Heaven, He reigns with splendor
Much the joy, O happy priest
The reward for your endeavor

A priest must sacrifice himself,
For his flock, in nearly every way
But Who is a member of his flock?
Every person, everywhere, every day

You see, by your examples
You shall help or you shall hinder
You can bring a soul to God, or
You can condemn her to a cinder

Man, it is, who gives the seed
Woman need accept to receive and reconcile
While man must bear many other burdens
God deigned woman to conceive and bear a child

Whilst tonsured man is the shepherd of souls,
In God's plan, woman brings new souls to earth
She has great dignity In the sight of God
As she carries a new soul and gives birth

O man, to be called forth and be chosen
Is to become a slave to all
Be fearless in your service of God
And truly you shall answer His call.


In the last 48 hours, my wife Andrea and I have learned that our son Michael Winston (age 10) has a tumor. Michael [pictured below with Randall] is a vivacious and happy boy who loves Jesus, plays the guitar, and loves to play in the woods with his three brothers. Everyone who knows him will confirm that he is a delight.

The tumor is in the bone of his left leg just above the knee. An MRI showed that the tumor has spread to the soft tissue in his leg, as well as the lymph node in that area. He is now on crutches to keep the weight off the area to avoid a fracture. This morning we learned from a CT scan that his kidneys and pancreas each have an abnormality as well. The doctor is concerned with metastasis. 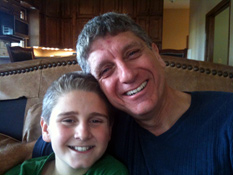 We will get a biopsy this week, to find out what we are dealing with, and what treatment the physicians will pursue. The oncologist has braced us to expect chemo, radiation and surgery.

I do not need to tell you how devastating news of this nature is. Andrea and I are talking with everyone we know in the medical/health world, and contacting every Christian we know to beg their prayers. Michael knows that something is wrong – the MRI, bone scan, and CT scan were an obvious clue. We have told him that we are still trying to figure out what is wrong, and what the doctors are going to need to do.

I am pleading with God for my son. I am begging the saints to intercede for his healing. And I humbly ask you to join us in praying for his health and life. I ask that you make Michael's prayer need known to every prayer chain, prayer meeting, etc., that you know.