Matt C. Abbott
Praying for abortionists and their supporters-by name


For the season of Lent, a period of prayer and reflection for many Christians in preparation for Easter, the Pro-Life Action League has put out a request to supporters to pray for three notorious abortion advocates.

The social media response has varied widely from supportive comments like, 'Keep up the great work...Praying for these ladies,' to accusations of 'harassment, threats and intimidation.' 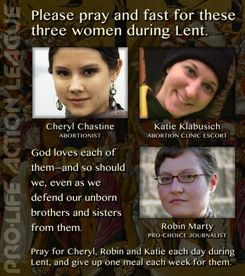 'We've asked for prayers that these three women who are so deeply entrenched in the culture of death will have a change of heart and come to realize that every aborted baby is precious,' explained Ann Scheidler, the League's vice president.

This trio of abortion advocates – Kansas abortionist Cheryl Chastine, New Jersey abortion clinic escort Katie Klabusich, and pro-abortion journalist Robin Marty – are the focus of an escalating dialogue on Facebook, where the League has issued a call for all pro-life Christians to pray and fast for these three women during Lent.

The social media campaign includes a meme with the message, 'God loves each of them – and so should we, even as we defend our unborn brothers and sisters from them,' along with the words, 'Pray for Cheryl, Robin, and Katie each day during Lent.'

These particular abortion advocates were chosen because the League has been involved with them over the past year – protesting Chastine's family practice office, confronting Klabusich in the blogosphere, and giving extended interviews to Marty.

The Facebook post has inspired vitriol from some quarters. One obscenity-laden comment referred to pro-life Christians as 'crackpots' and called the meme a 'hit list.' Another dissenter mocked the effort: 'Pray for them? You mean pray to have a target drawn on their backs,' and accused supporters of 'promoting and perpetrating violence.'

Ann Scheidler acknowledges that such a response was not unexpected, though it is totally unwarranted. 'We want to challenge ourselves and the whole pro-life movement to love our enemies, just like Jesus said to,' she explained.

'For a pro-life activist, it can be difficult to really love those who assist in the killing of over 3,000 unborn babies every day in the United States. There is no better way to overcome that difficulty than to pray for them – just like Jesus, who prayed from the cross even for those who were crucifying him.'

She also noted that in the past, 'God has used pro-lifers' prayers to draw people out of the abortion industry.' She hopes this prayer campaign will accomplish the same for these three abortion advocates. For more about the League's Lenten campaign, click here.


I asked Father Frank Pavone, national director of Priests for Life, to comment on the League's Lenten campaign.


The campaign to pray for abortion supporters by name is not only praiseworthy; it is a natural and logical application of the value and duty of prayer itself. This is why Priests for Life has always encouraged the very same practice, and in fact, in our regular Prayer Campaign project (PrayerCampaign.org), we have asked that each parish adopt the practice of praying for abortionists by name, starting with those who are committing abortions in that local community.

One of the ministries of Priests for Life also is to work with the Centurions, a healing effort for former abortionists that has been around for decades. In our work with them we often find how the prayers and outreach of pro-life people moved these individuals to reconsider their support of abortion.

If people object to the practice of praying for an individual by name, they should consider, first of all, that these are individuals whose support and involvement in abortion is public. We are not revealing hidden sins. Second, the pro-life struggle is not a debate club; it's a war, and we have to start treating it as such. That means we do things that make us (and the opposition) uncomfortable, though these things are completely moral. Praying publicly for those who are supporting a massive holocaust is the very least we can do to end it.


On September 29, 2008, the Feast of the Archangels, Human Life International launched its 'Saint Michael the Archangel Prayer Campaign for the Conversion of Abortionists.' Recognizing that the fight against the culture of death is primarily a spiritual battle, the prayer campaign was designed to encourage the faithful after every Mass to seek Saint Michael's intercession for the conversion of abortionists and all agents involved in the crime of abortion. HLI asked people to sign a pledge, to pray the Saint Michael Prayer daily and distribute as many copies of the prayer as possible.

Since 2008, HLI has, through this campaign, united hundreds of thousands of people around the world in this powerful prayer of intercession and invocation. Over 2.5 million prayer cards in 27 different languages have been distributed since then. Because of the worldwide threat against the dignity of life, we continue to vigorously promote this devotion.

According to Saint Paul: 'Our struggle is not with flesh and blood but with the principalities, with the powers, with the world rulers of this present darkness, with the evil spirits in the heavens.' (Ephesians 6:12) The widespread acceptance of abortion is perhaps the clearest proof of this reality – the legalization of a crime that destroys tens of thousands of lives every day across the world, and over two billion since this scourge began decades ago.

Pope Leo XIII composed the Saint Michael the Archangel Prayer in response to the threats of evil consuming the world and required it to be recited after the celebration of every Holy Mass. Pope Pius XI asked the faithful to pray the prayer for the restoration of religious freedom in Russia, who was threatening to spread her 'errors' throughout the world. As we know, the Soviet Union was the first country to legalize abortion. Blessed John Paul II in 1994 urged the faithful to devoutly recite the prayer in order to obtain heavenly assistance in the battle against the forces of darkness.

Before his conversion in 1979, Doctor Bernard Nathanson was a successful gynecologist and co-founder of NARAL. He was responsible for close to 75,000 abortions during his career as an obstetrician before undergoing his conversion. His life is but one example of many who have been transformed through the power of prayer and heavenly intervention. We need to pray more earnestly in order to lovingly pull lost souls out of the grip of darkness because we seek not the death of a sinner but their conversion.

We have also seen the effect of prayer in asking for the intercession of the Mother of Jesus during our From Ocean to Ocean Campaign in Defense of Life. Now moving through the Southeast, HLI's Father Peter West reports another miraculous event in Tallahassee, as a surprise return to the area and a prayer at an abortion clinic was followed soon by the clinic's sudden closure. It's God who wins these battles, and He wants to do so with our collaboration in prayer, through the intercession of His mother and others who are particularly close to Him in Heaven. This is how His grace works!

As we enter into the Season of Lent, we are called to do penance, acts of charity and to deepen our spiritual lives. I am humbly asking you to join HLI in praying the Saint Michael the Archangel Prayer every day during Lent, especially after Mass, for the conversion of abortionists and all agents who participate in the crime of abortion. I am asking you to pray this prayer daily as a family and encourage others – friends, neighbors and fellow parishioners – to join us in this devotional prayer. Please help us spread this powerful devotion to as many as possible.

God became man to destroy the power of evil forever so that we might live and never die. Saint Michael reminds us of the infinite goodness of the Heavenly Father and the mercy He extends towards all He loves. If we can spread this devotion, we can help bring about the conversion of souls, the protection of human life and the building up of a Culture of Life.


Prayer to Saint Michael the Archangel

Saint Michael the Archangel, defend us in battle, be our protection against the wickedness and snares of the devil. May God rebuke him we humbly pray; and do thou, O Prince of the Heavenly host, by the power of God, cast into hell Satan and all the evil spirits who prowl about the world seeking the ruin of souls. Amen.