October 12, 2014
Thanks to Catholic writer Carlos Caso-Rosendi for translating and providing me with the following bit of seemingly prophetic theological speculation, written by Father Julio Meinvielle (1905-1973) in the book From the Kabbalah to Progressivism (original title: De la Cabala al Progresismo), first published in 1970.

Food for thought in these tumultuous times.


It boggles the mind to attempt comprehension of how the promises of assistance to the Church by the Divine Spirit in this cabbalistic era are going to be fulfilled, and how it will come to pass that 'the gates of hell shall not prevail.' But just as the Church began as the smallest of the seeds and became a huge tree, in the same manner she can be reduced in size and acquire a more modest shape. We know that the mystery of iniquity is already at work but we do not know the full extent of its power. However, there is no difficulty in admitting that the Church in public view can be conquered by the enemy, thus converting from Catholic Church to Agnostic Church.

There could be two churches: one in public view, a Church magnified in propaganda, with well-advertised bishops, priests, and theologians, even with a pope with ambiguous attitudes; and another Church, a church of silence, with a pope faithful to Jesus Christ in his teaching and with some loyal priests, bishops, and faithful spread about as pusillus grex (little flock) all around the earth. This second church would be the Church of the promises, while the other defects or apostatizes. The same pope could preside both churches that would appear to be one in appearance. The pope, with his ambiguous attitudes, would validate the confusion. Because on one hand – being the head of the Church of promises – he may profess an impeccable doctrine, while on the other hand, by sending confusing, even reproachable signals, he would appear to be advancing the subversion and pastoral message of the 'public' Church.

The possibility we propose here has not been studied enough by ecclesiology. But if we look at it thoroughly, we shall see that the promise of assistance [by the Holy Spirit] to the Church is limited to [a] avoiding the introduction of errors in the Roman See and in the very Church and [b] that the Church shall not perish or be completely destroyed by her enemies. None of those promises contained in the Gospel is invalidated by the hypothesis hereby proposed. On the contrary, both hypothesis gain feasibility if we consider the scriptural passages that refer to the great apostasy. Such defection will be complete but must coincide with the perseverance of the Church until the end. Our Lord is quoted in the Gospel asking 'But when the Son of Man comes, will he find faith on earth?' (Luke 18:8.)

St. Paul, in 2 Thessalonians 2,3, calls that defection of the faith a universal apostasy that will coincide in time with the manifestation of the 'man of wickedness, the son of perdition.' That universal apostasy is the total secularization of public and private life that is proceeding apace in today's world. The only alternative to the Antichrist shall be Christ, and Christ will dissolve the Antichrist with His Breath thus fulfilling the final act of liberating History. Mankind will not remain alienated under the evil one. It has not been announced that Christ will save the masses though He shall save His Church, the 'little flock' (Luke 12:32), for it is the Father's good pleasure to give them the kingdom. 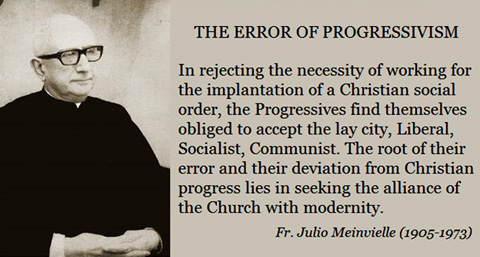