August 31, 2015
A bit of good news to share: A reliable source has informed me that Father John Corapi, a popular priest among orthodox Catholics who departed public life after a tumultuous period a few years ago, remains in the priesthood and is re-establishing his spiritual life.

There's no indication he'll be returning to public life anytime soon, if ever. However, it's nice to know that Father Corapi can at least be a quiet prayer warrior during this extremely difficult time in the Church and world.

I won't go into the particulars about what transpired in the past – it's water under the bridge – and I'm sure there's information on the Internet (some of it more reliable than other information, obviously) for those who may not be familiar with the situation. Plus, those who really didn't pay attention to him in the first place likely don't care one way or the other about his current status.

The bottom line is that we all are wounded and spiritually/morally fall often (I know I do!). We just have to try our best to keep moving forward in faith in this "valley of tears." A very difficult task, I must say. That doesn't mean condoning moral corruption or remaining silent about it, but we all need God's mercy.

Our Lady of Perpetual Help, pray for us.

(Click here for a further update on John Corapi as of November 2015.)


The following is an excerpt from veteran Catholic apologist and author Dave Armstrong's latest book Proving the Catholic Faith is Biblical. Thanks to Sophia Institute Press for allowing me to publish the excerpt in this column. Click here to order a copy of the book.

By Dave Armstrong
I was curious about the approximate percentage of Eastern Orthodox and Eastern Catholic priests who are celibate (i.e., those who are celibate in an environment where a married priesthood is allowed). My thought was that if celibacy is so valued in "non-Latin" Christianity, as is claimed, we should expect to see a significant number (maybe one-quarter?, one-third?) of celibate clergy (since they are given the choice). If not, then it seems reasonable to conclude that it is relatively less valued, so that among these priests, the percentage who opt for marriage would be scarcely distinguishable from that of the general public. 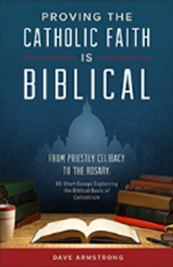 And that in turn (if true) would be another argument in favor of mandatory celibacy, since if it isn't required, then what Paul recommended as a preferred state for clergy will quickly become a rarity. Human nature seems to teach us that what is very difficult usually won't be chosen unless it is mandatory in some sense. Hence, we have the explicitly biblical notion of the evangelical counsels.

Therefore, I would conclude from the statistics that celibacy is greatly undervalued in Orthodoxy among the class of clergy; otherwise it would be practiced by more than only 7 to 10 percent of all Orthodox clergy. The state in life that St. Paul taught was preferable in terms of undistracted devotion to the Lord occurs far less among Eastern Orthodox clergy, because it is not required. The result becomes like the situation in Protestantism: clergy are allowed to marry, so virtually all do, and those who don't are too often regarded with suspicion. I think this is human nature: if an easier path is allowed, almost all take it, whereas difficult things need to be required.

Latin rite Catholicism thinks celibacy is so praiseworthy and honorable that it chooses to draw its priests almost exclusively from the class of men who agree with Paul and follow one of the evangelical counsels as regards their own calling in life. I've never understood the objection to this (even when I was an evangelical Protestant I understood the reasoning of it).

What would be the reply to this line of argumentation? One "solution" or middle course (I don't advocate it myself; I'm just thinking theoretically) might be to have a clergy that is (deliberately, by requirement) 50 percent celibate and 50 percent married, so that both callings are equally valued in practice. Otherwise it seems to be an all-or-nothing situation: 99 percent celibate clergy (a few exceptions for Anglican clergy converts, et cetera) or 90 to 93 percent married clergy. If the statistics are similar in Eastern Catholic clergy (as I strongly suspect will be the case), my point is strengthened.

An Orthodox Christian in a Facebook thread denied that there was an innate relationship between celibacy and the priesthood. But if this is so, why (if there is not at least a strong correlation) were Jesus and all the disciples either not married or married (like Peter) with an agreement to leave their wives for the sake of ministry, with Jesus actually referring to those who have left wives or families for His sake (Luke 18:29)?

Between that and St. Paul's strong teaching in 1 Corinthians 7, do we not see a sort of biblical/apostolic preference toward the state of celibacy for clergy? Of course, the ones who are celibate for the sake of the kingdom come from a small "pool," but then priests are very extraordinary and exceptional men, so I would fully expect them to come from a small and very special subclass of men in the first place.

There are plenty of opportunities for married ministry. One can be a deacon or a director of religious education or a youth pastor or a teacher in a Catholic school. These roles don't require looking after an entire parish. It's very difficult to balance that and a family. Just ask children of Protestant pastors how that often works out. People can do only so much.

Of course no one should be a celibate priest unless he is called to it. This is self-evident. Existing problems do not cast doubt on the principle – only on the selection process. We draw our priests from a smaller group of men than Orthodoxy does. The goal and task is to find holy men who truly are called to the priesthood and/or to celibacy. This is of supreme importance, given the sexual scandals and heterodoxy that have occurred.

I don't see why the Latin system of required priestly celibacy should so often be disparaged. There is biblical support for it. Catholicism as a whole has both traditions (since Eastern Catholicism allows a married clergy) and values diversity of opinion and practice.

It all goes back to the selection process. If we agree that celibate priests and married priests are both valid, then the Catholic (Latin) Church has to make sure that candidates for the priesthood are called to celibacy, and Orthodoxy has to make sure that a married priest can handle both family and Church responsibilities. These are two very different sets of capabilities and personal needs.