Matt C. Abbott
'An exorcist explains how to heal the possessed'

April 16, 2018
Below is an excerpt from the newly-released book An Exorcist Explains How to Heal the Possessed (And Help Souls Suffering Spiritual Crises), by Father Paolo Carlin, "a member of the International Exorcist Association (IEA, officially recognized on June 13, 2014 by the Holy See), acting as counselor, official spokesman and press officer." Thanks to Sophia Institute Press for permitting me to publish this excerpt in my column. Click here to order the paperback version from SpiritDaily.com. 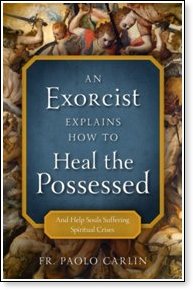 Distinguishing between mental illness and a diabolical attack – two realities with similar manifestations – is a complex and delicate task. For this reason, the priest exorcist must be very diligent in making use of the human sciences of psychiatry and psychology. The enemy is strong when he is hidden, and psychological or psychiatric illnesses are a realm that, in the exorcists' view, is easily infiltrated by him and where he is difficult to discover.

Moreover, there are signs, manifestations, or actions that can vary according to the treatment of one or the other condition. For example, when the person is under attack, his mood can change in a moment. In a few seconds he can go from serene and joyful to irascible and even violent toward things or persons. If, during these irrational mood changes, one prays mentally, invoking the help of Mary or of St. Michael the Archangel, and the person reacts even more violently, then vacillates between moments of calm and raucous anger, we can be certain that we are before a spiritual, not a psychiatric, problem. This occurs mainly in persons who do not have a relationship with Jesus, who do not the practice their Faith. They neither listen to the Gospel, pray, nor receive the sacraments.

Psychological or psychiatric problems, on the contrary, always have an evolution in time and an identifiable cause that is explainable and therefore manageable with suitable medication. In fact, after following the therapy established by a medical doctor, psychological disturbances generally disappear or mitigate.

Once, a person came to me with sudden and unexpected mood changes. Medicine had no effect, and no one was able to explain the cause. She arrived tranquil, but a few seconds after we began the conversation she began to speak angrily. I mentally invoked our Lady, asking her to help me in the discernment. Immediately the person said to me: "Do not call on that one!" It was clear that it was not a psychiatric case.

In the cases of psychiatric or psychological disturbances, there is no reading of the mind or change in the person's behavior when one prays mentally or invokes our Lady, Jesus, or the saints.

It can happen that the enemy is hidden within a family's relational difficulties or is the one causing divisions and hatreds among the relatives. In these cases, it is well for the afflicted to make an act of humility through the sacrament of Reconciliation. For sins committed against relatives (which are also sins against God), he should ask God's pardon. Then he should reconcile with the one he has hated, relying on works of mortification aimed at his arrogance, which generates egotism and pride, which are always latent in our spirit. If we pardon each other reciprocally, the disturbances to our health and our work will quickly disappear and the fulfillment of our life's projects and plans will be restored. Peace will return to our family and to our heart because liberation from an evil action has occurred.

I repeat: in addition to the sacrament of Reconciliation, it is necessary to have the Word of God in one's head, prayer rushing from one's heart, and the Eucharistic encounter with the Risen Jesus.

Among the sudden and more evident signs of attack by the enemy, the most significant are excessive pupil dilation that cannot be altered, not even by shining a direct light on it; the reddening of the sclera, the whites of the eye, as with conjunctivitis (pink eye); the voice becoming raucous and baritone (even if a woman is speaking); the lengthening and darkening of the face; an extraordinary strength beyond the physical possibilities of the person; a violent reaction toward sacred images and objects; the use of unknown languages; and knowledge of the occult.

It happened to me once in the case of a fourteen-year-old girl who, apparently with solely the strength of her will, moved objects and launched them against her grandmother when her grandmother was praying.

Beware! These powers, such as reading a person's thoughts and foreseeing the future, are not natural and, therefore, do not belong to a human being; otherwise all of us would have them! The mother of this girl, having been deceived by Satan, believed that they were telekinetic capacities that the daughter had been given by a parapsychologist, and therefore I was prevented from praying the exorcism. In this case, the mother also needed prayers.

When unexplainable things happen and medical doctors cannot resolve the problems, do not go to sensitives, alternative medical doctors, self-styled holders of charisms, wizards, or practitioners of the occult. When someone came to me after having consulted all these persons, not only were the problems unresolved; they were aggravated so much that, as the Gospel says, the condition of that man was worse than before. In these cases, it is always necessary, above all, for the afflicted person first to go to Confession and receive Holy Communion. Then he must go to his pastor (or to any priest) for a prayer of liberation. If then, after repeated prayers, there is no improvement, it is necessary to consult the priest exorcist of the person's diocese.