March 3, 2020
March 4, 2020 is the 22nd anniversary of the unsolved murder of Father Alfred Kunz, a priest and canon law expert of the Diocese of Madison, Wis.

Kunz was known for celebrating the Traditional Latin Mass (and the Novus Ordo Mass) as the longtime pastor of St. Michael Catholic Church, located in rural Dane, Wis. He had a good reputation among many – but certainly not all – Catholics and was known to be staunchly pro-life. He was also involved in exorcisms from time to time, albeit not in an official capacity.

On the morning of March 4, 1998, Kunz was found in a large pool of blood, brutally murdered, in the hallway of the school attached to his parish. His throat had been cut. There have been various theories put forth as to the killer's motive – some more plausible than others.

For several years, at least one detective (now retired), Kevin Hughes, believed the male teacher who discovered Kunz's body, Brian Jackson, committed the murder. Jackson, who reportedly had a strained relationship with Kunz in the weeks leading up to the murder, seemingly had a close relationship with another local but fairly well-known priest, Father Charles Fiore, who was a good friend of Kunz.

Jackson has been ruled out as a suspect, according to the Dane County Sheriff's Office. He's never granted an interview to any media outlet. When approached at his home by a reporter from the Milwaukee Journal Sentinel (whose investigative journalist, Gina Barton, did a series of podcasts and articles on the case last year, in which I was interviewed), Jackson asserted "he is innocent and believes the investigation was waylaid by the fact detectives spent so much time on him."

The sheriff's office has also stated that the principal of St. Michael School at the time of Kunz's murder, Maureen O'Leary, was uncooperative and even told investigators to close the case and mark it unsolved. In a 2018 interview with Catholic writer Joseph M. Hanneman, O'Leary denied being uncooperative, insisting she talked with investigators on several occasions.

The sheriff's office has claimed to have multiple persons of interest, but those individuals are known only to the sheriff's office. According to one source, the search warrants related to the case, which have been sealed since 1998, were re-sealed on Feb. 11, 2020 for another six months.

While there haven't been any significant developments in the case in recent times, in May of last year an individual made a baseless and malicious claim/edit on Wikipedia that Kunz "had molested one of his male students at St. Michael's."

When I brought this to the attention of the sheriff's office, Lt. Kerry Porter wrote in an email: "As you are probably aware, there is no evidence to support the claim made concerning molestation."

In a follow-up email, Porter wrote:

"Detective [Gwen] Ruppert made contact with Wikipedia and pointed out the issues related to the source cited not supporting the claim of molestation. They were extremely responsive and immediately removed the statement from both the article and the revision history.

"We will be seeking to obtain the identity of the poster for investigative purposes."

I don't know with certainty who made the defamatory claim/edit, but I do have an idea of the (troubled) individual's identity and mentioned it to Porter.

In 2018, Father Richard Heilman (pictured below) of the Diocese of Madison wrote the following reflection regarding Kunz:


––––––––––––––––
It was in the year before Father Alfred Kunz was murdered (1998) that I became acquainted with him. This was a time in which I found myself uneasy with the direction of the new Mass and spent a great deal of time praying and studying. I had a deeply spiritual sense that we had allowed the Mass to lose its ability to help the faithful become predisposed to the supernatural grace offered. 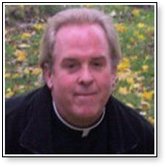 I shared this with a friend, who was a religious sister. She said, "I understand," with a big smile on her face. "I want you to meet someone." She introduced me to Father Kunz. There was something sublime about him. I felt like I was in the presence of a truly holy man. He was humble, gentle and kind.

He spoke to me about a need for greater attention to the supernatural. Our Church was spiritually sick and in great need of more who believed in the supernatural power of God. We especially need more holy priests.

It was not long afterward that I received an experience of a lifetime. It was a Papal Mass – my first Papal Mass – with Pope John Paul II, on the Feast of the Presentation. It was my tenth anniversary sabbatical, and I had been studying in Rome for three months. The priests studying received a beautiful engraved invitation; we were thrilled to be going. We were told that we should go two hours ahead of time if we hoped for a good seat. I joked that I don't go that early for anything, even for the pope.

We arrived about 30 minutes before Mass, and they were right: there was no hope for a seat, and we were destined to stand in the back, which was about a city block away in that huge basilica. With five minutes to go, an usher looked over at a priest-friend and me. Now realize, there were hundreds of priests there. He signaled for us to come over to him. He proceeded to take us up the aisle. He kept going and going and going until we got to the two front rows reserved for bishops and cardinals – the only rows with velvet kneelers. He motioned for us to sit there. To this day, I have no clue why he singled us out among the hundreds of priests in attendance to sit in front with the cardinals.

There we were, in St. Peter's Basilica in Rome, about to pray with the Vicar of Christ. As Mass began, glorious sacred music filled the basilica – and my soul. Of course, being a Papal Mass, there was great attention given to precision (like a military honor guard), which struck me as beautiful order and honor due to the majesty of God. But it was more than that. While I had always loved the Mass, I felt, maybe for the first time, that we were truly glorifying God. On that day, February 2, 1998, I was truly changed.

I recalled Father Kunz's words, and I began to ask myself, "What have I been doing?" I had spent the first ten years of my priesthood buying into the common notion that, if we create all kinds of trendy nuances to the Mass, while we kept the Mass as whimsical and entertaining as possible, people would hear about how "cool" and "fun" and "with the times" we were, and come running. We were treating the Mass as a commodity that we needed to somehow market to the world.

Worse than anything, I realized we were all but throwing out any sense of divinity; any sense of the supernatural. Where, in all of this, was any sense of awe and wonder in God's presence? Where was the sense of God's glory and majesty? Saint Francis of Assisi said, "Man should tremble, the world should quake, all Heaven should be deeply moved when the Son of God appears on the altar in the hands of the priest."

What happened to me that day, February 2, 1998? I was awakened to the most important battle of our times.

In a speech given on June 13, 1998, titled The Secular War on the Supernatural, Dr. Alice von Hildebrand spoke of a private audience in 1965 she and her husband, Dietrich von Hildebrand, had with Pope Paul VI. She confided how her husband "shot from the hip," as he usually did, saying:

Your Holiness, you realize that the Church is going through the worst crisis in history, worse than the Protestant Reformation (which I usually refer to as the Protestant Deformation). The pope seemed to be surprised and my husband continued: 'What has taken place is that people have lost sight of the supernatural.'

Now let us abolish the terms 'conservative' or 'liberal,' the terms 'left' and 'right,' which are secularistic. I suggest that we say from now on 'those who have kept the sense of the supernatural and those who have lost it.' That is the great divide; that is the essence.

Do you look at the Church and her teaching, whether dogmatic or moral, with a supernatural eye, or do you look at it with secular lenses? That is the divide. Left and right confuses the issue. Let us re-discover the greatness and the beauty of the supernatural and I claim that it is so difficult in the polluted world in which we live, that if we don't pray for it every single day, we are going to be infected. It is the air that you breathe, the newspaper that you read, the television show that you see, time and again you will see this is a fight and attack on the supernatural.


It was shortly after this profound, life-changing experience, while I was still in Rome, that I received the call about Father Kunz's murder. I realized, in that moment, that Father Kunz had been praying for me, and this is why God positioned me to have this experience. Right there and then, I asked Father Kunz to continue to be my prayer warrior in this battle to reclaim the surrendered ground of the supernatural in our Church.

I believe he has, every day of my priesthood.