April 18, 2020
Catholic author Leila Miller writes the following about her recently-released book Impossible Marriages Redeemed: They Didn't End the Story in the Middle:


The message of the culture is clear: When things get really bad in a marriage, the best, and even only, thing to do is to divorce and move on. The message of the contemporary Church is not much different, although Catholics (both ordained and lay) might advise annulment after the civil divorce and before the moving on.

The 65 stories in this book tell of a different way: A way of Christ-like faithfulness and solemn commitment to one's sacred promises – something that was common (or at least considered honorable and right) in eras past, but which seems forgotten today. If the world is telling you (or if you are telling friends and family) to walk away from a marriage, read this book first. 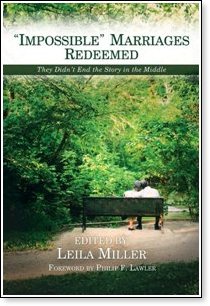 The vast majority of the stories in this book are anonymous. Most are recounted by the spouses themselves or by the grateful children of once-disastrous unions, while two or three are told by other close family members. The first section of this book contains 50 stories of redemption – the details of marriages that went through the wringer and survived. Some of those marriages turned blissful, some merely content, but all were redeemed.

The vast majority of contributors are female. Women, due to their more verbal and relational nature, are much more likely than men to respond to and execute a request to tell a personal, emotional relationship story. In no way should we take this imbalance to mean that men are more often the bad guys in marital break-up. In fact, today, women are much more likely to file for divorce than men, a statistic that is largely explained by the pervasive and corrosive influence of feminist ideology, which grossly misunderstands and/or deliberately rejects sexual complementarity and the meaning and order of marriageall of which is a story (or a book) for another day.

The second, smaller section of the book contains 15 stories of standers – those wives or husbands who have chosen to stand for their marriage vows despite complete abandonment by their spouses. Even the Church seems to have forgotten these few courageous souls, who are often patted on the head, scolded, or even deemed emotionally unhealthy for not moving on to find that shiny new romance themselves. The profound sacrifice of these lonely but faithful souls makes the rest of us uncomfortable, yet we need to honor them as heroic witnesses for matrimony.

Thanks to Leila Miller for allowing me to publish the excerpt below  contributed by stander Jane Doe  in my column.


Click here to order a copy of Impossible Marriages Redeemed.

This is my story of standing loyally for the sacrament of matrimony.

I met my husband in high school, and we had been dating for two years when we decided to get married. We both came from strong Catholic families, and both sets of parents ended up being married for 50+ years. There was no hesitation in marrying my husband; I knew without doubt that he was the man I wanted to spend the rest of my life with. We were inseparable almost from the time we met.

We got married in college in 1986, and our first years together consisted of building a foundation for our future together. After graduation, my husband went on to complete his law degree. We were married for 19 years before the divorce, and we have six children together.

There were some years that were very difficult for us, most notably the year our third child, a son, was born and died. His death changed each of us in very different ways. The years after his death were difficult, but we survived and we grew in the journey of grief.

At Christmas 2003, my husband came up to me and said, I know this doesnt make any sense, but Im not happy and Im leaving. Our living children were two, three, five, eight, and 12 years old at the time. I was shocked. I never thought he would break up our family, the family we had worked so hard to create. Yes, we were going through a rough patch in our relationship, and yes, life was so busy that we didnt take enough time to focus on us. But I never imagined he would leave us.

We spent the next four months in marriage counseling. My husband moved back in our home, and we tried to repair our relationship; however, he had already emotionally moved on. He was in a relationship with his secretarya relationship that I did not know about at the time. He moved out for good in April 2004 and filed for divorce.

After lengthy deliberation and a court trial, the divorce was finalized in 2005 on the exact date we had buried our son years earlier. The death of our son, and now the death of our marriage. My husband went on to live with several women, and he ultimately married one of them in a civil ceremony. Having to send our children to my husbands new house with his new lover was very hard for me. Exposing our children to adultery was so wrong, but I was forced by the court to send them to his house for visitation.

In 2012, my husband filed for an annulment. The annulment process, like the divorce process, was long and difficult. The tribunals decision (negative) led to my husbands appeal to the Roman Rota, the highest tribunal in the Church. In 2019, we received the final decision from the Roman Rotanegative. Our marriage was and is valid.

I had always felt in my heart that our marriage was valid. Ive never felt it was right to consider another relationship, and I have always kept myself open to the possibility of reconciliationand I always will.