The following e-letter was written by Suzanne and Pietrina Probst. God bless everyone involved in this pro-life endeavor!

In February 2020, Joe Lazar, a parishioner at St. Peter Church in Volo, organized and led the 40 Days for Life campaign at the Family Planning Associates (FPA) on North Milwaukee Avenue in Chicago. When the escorts at FPA realized that large groups of prayer warriors were descending upon their territory during the 40 Days campaign, they took a break and left the prayer warriors alone to pray and counsel women.

Through the power of the Holy Spirit, babies were saved during this campaign.

After the 40 Days for Life campaign ended, the escorts did not return right away. The prayer warriors were able to counsel more women and give them literature on how to save their babies. FPA dispensed the abortion pill. The Women's Center is not far from FPA, so women were referred to The Women's Center, which is a Catholic-based pregnancy resource center. 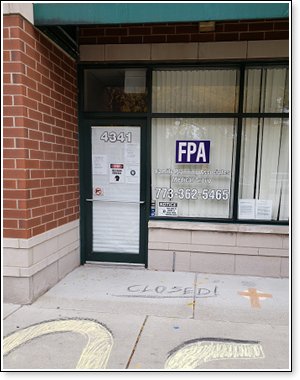 FPA was open on Friday's only. So Joe Lazar felt called by God and decided that his goal was to permanently close this abortion facility. He devised a plan. He set up a sign-up schedule online for the prayer warriors to insure that all of the hours that FPA was open were covered by prayer warriors.

We ordered yellow T-shirts and yellow baseball hats with a pro-life message to wear during the prayer vigils. We ordered more pro-life literature to give to the women as we counseled them and put the literature in small yellow bags.

Joe Lazar held a training session online for the prayer warriors to better equip them with saving babies. When parades and picnics were cancelled due to the pandemic, the prayer warriors gathered together at FPA on July 4 to sing patriotic songs and pray to end abortion.

People from all walks of life prayed every Friday throughout the summer and fall at FPA.

Joe Lazar continued the 40 Days for Life campaign in the fall of 2020 at FPA. The prayer warriors continued to pray on Friday's. There weren't as many escorts during the 40 Days vigil.

When turmoil arose during the election in November, the prayer warriors did not pray at FPA until they felt it was safe to return. Prayer vigils began again in January 2021 on Fridays. Joe Scheidler continued his prayer vigils at FPA in the weeks before his passing.

When the prayer warriors returned to FPA on Friday, January 29, 2021, they learned that the escorts were gone and the abortion facility was closed. The prayer warriors witnessed FPA employees removing large file boxes from the facility.

When Joe Lazar learned of this turn of events on Friday, January 29, 2021, he called FPA and was told that FPA on North Milwaukee Avenue was closed permanently!

So when we feel discouraged and wonder if our prayers are effective, please remember what happened at the FPA on North Milwaukee Avenue on Friday, January 29, 2021.

Through God's grace and the intercession of our Blessed Mother, St. Joseph, and all the Saints, FPA on North Milwaukee Avenue closed, and as a result, babies will be saved due to the closing of this abortion facility.

Remember that 2021 is the year of St. Joseph. May St. Joseph, Protector of Families, continue to close more abortion facilities.