Michael Bresciani
Americans marching for the right to kill? The cry of the Omega generation 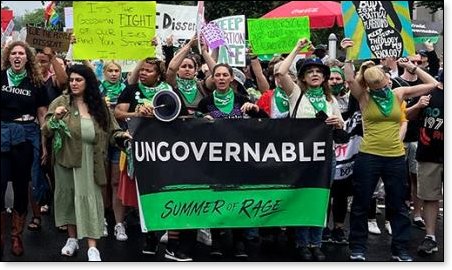 We know full well that this generation is most often referred to as Generation Z, but that is only for those who are living exclusively in a secular world. Among those who know and trust the scriptures and the prophetic aspects of the Bible, there is an Omega generation, otherwise referred to as the last generation.

In fact, it is not the last generation ever to be, but it is the last in the world as we know it today. The will of God and the wheel of time bring about that generation, and it could no more be stopped than a hurricane or a tornado.

Many things that are said about the Omega generation are coming into place today. The scriptures warn that they will have trouble with eating meat, with marriage, and with faith in God. (1Tim. 4:3.) Additionally, they will be given to panic over current events and pop trends like global warming and cataclysms from asteroids and, yes, even invasions of extraterrestrials. They will be fearful of enemies seen and unseen, real and imagined. (Pr. 28:1.)

False religions' adherence to astrological prognostications, sorceries, and a general melee of pseudo-science and paranormal hoopla will all be in the mix. (Rev. 9:21.)

Then along comes those who have decided that someone or something gave them the right to kill unborn babies. Such a right is not in the Bible or the Constitution, and until recently, it couldn’t be found in the imaginations of anyone who has ever valued human or animal life. They can’t credit "nature" with giving them the right, because almost all of nature does all it can to fight for the life of its own offspring—from worms to wolves.

But if the abortionists were true to form, they would be visiting all the animal shelters to offer free litter abortions for dogs and cats—just to make them…healthier!

The pro-abortion generation claims their "right” emerges from an attempt to assure a women’s health.

Nothing could be more starkly incongruous.

Not one person gets healthier due to an abortion. The baby’s health ends in death throes, and the mother’s health is not improved by an invasion of her uterus or the subsequent depression and regret. The father of the child has regrets and second thoughts to deal with. The families of the aborted are denied a grandchild, brother, sister, nephew, niece, or cousin. And the world at large has been denied a future president, electrical engineer, record breaking athlete, another Albert Einstein, or just a darn nice human being.

The Daily Signal posted an article on July 9, 2022, titled "We Love Killing Babies" that was also posted on Twitter. Perhaps it seems overstated, but it reveals the base nature of the desire to abort. Used for shock effect or a revelation of a deep hatred for humankind, the idea of loving to kill is, at the least, deranged—and at the worst, demonic.

One girl is seen standing on the street in Washington D.C. and screaming that boast at the top of her lungs.

What could prophecy possibly say to abortionists?

Revelation is a book that contains all prophetic utterance. All of it is futuristic, but it also contains theological depth in its warnings. It reveals what Christ is most upset about when judging our world.

Although the meanings are deep, they are not secret or impossible to understand. The following is a passage that clearly warns that those who seek to detain, kill, and destroy other human beings will have the same done to them.

The clock is ticking.

For the moment, the lust for innocent blood goes unchecked and unabated, but the clock continues toward a day of reckoning. It is nearer than you think.