Michael Bresciani
Biden says, 'Something is going on in America that is just not normal.' He is right: it's demonic 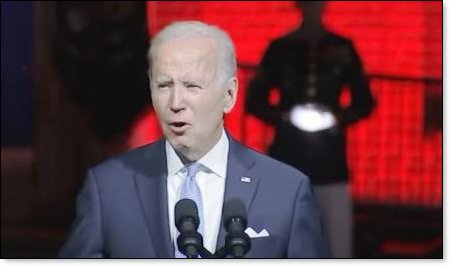 Thursday night, September 1, 2022, Joe Biden addressed the nation from Philadelphia. The speech was heavily laced with anger and insults toward a whopping 74 million Americans who have supported Donald Trump in the past.

It is painfully obvious that in the absence of any successful accomplishments since Biden took office that all that is left is to pitch the usual anti-Trump rhetoric, and hope the gullible and media-whipped leftists will bite.

Biden is a victim of the other “Great Reset”

In 2020, the World Economic Forum (WEF) launched an economic program that when finalized should put almost complete control of the world’s wealth into the hands of corporations and global financial institutions.

The fascism Biden so vehemently warns about belongs to Joe Biden. Author Glenn Beck says, "Biden is spearheading the move toward Twenty-first century fascism by calling for implementation of the financial institutions of the world."

Oddly, the “Antichrist,” who rules the world in the last seven years of time as we know it, gains complete control over the world’s economy, and easily ends up ruling the world without firing a single shot. That is an unalterable prophetic surety.

The other reset, that parallels the economic reset, is created in the last days atmosphere of deep moral reprobation (Ro 1:28), and it results in a worldwide pervasive and intensely perverse reversal of good and evil.

Woe unto them that call evil good, and good evil; that put darkness for light, and light for darkness; that put bitter for sweet, and sweet for bitter! (Isaiah 5:20)

What is Joe Biden calling normal?

Coming in as number one on the perversion scale, with no chance to be called normal in this world or the next, is the abuse of children.

Regardless of what woke teachers tell their classes about history, all nations that began to disregard the lives of their own offspring fell into collapse and diminishment. America has no chance of becoming the exception to the rule.

America has been killing children since 1973, and now that abortion is on the chopping block, the devils have induced the woke to offer the help of doctors and medical clinics to maul, mutilate, and permanently alter their bodies as an offering the demons of transgenderism.

The Boston Childrens Hospital is just one example of a medical facility that offers and brags about hysterectomies, breast removals, and permanent “gender affirming” surgeries for boys.

Is this one of Biden’s “normal” behaviors?

Other Biden-esque normality that makes us cringe

The rest of Biden’s threatened “normal” behaviors is also just as unbelievable. This is what most Americans question about Biden’s perception of normality.

What other countries think it is normal to swing open the gates and let anyone cross into their country? They enter without vetting, health checks, and some are herding children into human trafficking and carrying dangerous drugs that kill our fellow citizens by the thousands, especially our youngsters. Is this more of Biden’s normality?

What is normal about leaving our own people and billions of dollars’ worth of military equipment behind to an enemy we have been engaged with for over twenty years?

What is normal about taxing someone to pay for school loans someone else no longer thinks they can afford—even those who already paid their loans in full?

What is normal about choking a nation's energy sources to bring in another kind of energy supply that does not yet exist.

What is normal about hunting down a former president like he was a common criminal, including raiding his own home?

Finally, what is normal about thinking that you, Mr. Biden, are half the man Trump is, or half the president that Donald Trump was?

Using, or overusing the term “MAGA” in an address is nothing more than your usual political rhetoric at best and blowing smoke at worst.

With Joe Biden, correcting lies and absurdities, watching failures, and listening to him attack half of the decent people of this country, has now become…normal.