December 12, 2014
We've heard a lot about excessive force lately. But, in reality, those who fight day in and day out for preborn babies know all too well another meaning of excessive force. We see each and every day the slaughter of countless babies, yet this lawful practice is allowed to continue. What can be worse than excessive force perpetrated upon the smallest and most innocent of all?

The media has saturated readers with stories surrounding the recent actions of police officers in Missouri and New York. The language used by reporters and commentators to define the individuals they have faulted in these cases is quite compelling, but perhaps also more than a little hypocritical. 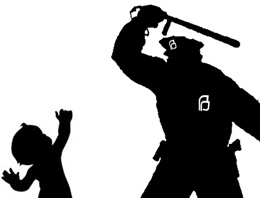 I say that because, when I hear certain words, I am immediately reminded of the media's deafening silence when it comes to reporting about a preborn child who dies because of the violence that is the act of abortion.

Excessive force is a term some toss around these days. According to one online legal resource it means "the use of force greater than that which [is] reasonable and prudent" for a law enforcement officer. But when the incident in question is the taking of the life of a preborn child by a physician-an act which is neither prudent nor reasonable-the police can only look on, for the law is silent. In fact, not only is the law silent, but it protects the killer rather than the innocent.

We are told that these recent cases of men rendered dead by the use of force allegedly perpetrated by policemen are examples of acts of discrimination and brutality. Reporters argue that these acts were committed against those who some say are innocent of any wrongdoing.But as these cases unfold and we hear the rhetoric-much of which is bravado-some of us are left with a very bad taste in our mouths.

So I will say it again. And again. The innocent baby from the beginning of his biological life is not guilty of any wrongdoing. This child has not carried out even the smallest crime. In spite of these facts, a heinous act of murder is committed against babies hundreds of times daily as the public-including the justice system-looks on.

Obviously there is a legal distinction. The direct killing of a living, breathing human being who has survived the womb is always an act that should be investigated to the full extent of the law. That is what justice requires. But of course, the justice of which I speak is not applicable to a child whose mother has been given a legal right to pay a third party to kill him as long as he is not yet fully born.

Excessive force should never be used against an innocent preborn, but it is every day.

Discrimination should never be employed by any group of people, yet lawmakers, physicians, and families discriminate at will against preborn children of every color at every stage of their biological development.

Brutality is always a suggestion of an uncivilized act unless the victim who is brutalized is a preborn child.

The narratives we hear regarding the recent unfortunate incidents are hollow because there is no justice for anyone born or preborn as long as the law is blinded by political agendas and erroneous decisions by judges who are incapable of understanding the true meaning of justice.

When St. John Paul II analyzed the question of just versus unjust laws, he wrote:


The doctrine on the necessary conformity of civil law with the moral law is in continuity with the whole tradition of the Church. . . . This is the clear teaching of Saint Thomas Aquinas, who writes that "human law is law inasmuch as it is in conformity with right reason and thus derives from the eternal law. But when a law is contrary to reason, it is called an unjust law; but in this case it ceases to be a law and becomes instead an act of violence." And again: "Every law made by man can be called a law insofar as it derives from the natural law. But if it is somehow opposed to the natural law, then it is not really a law but rather a corruption of the law."


And this is the crux of the matter. On the one hand man's law is used to protect those who are accused of a crime, but on the other hand the law protects deadly crimes committed against the innocent prior to birth.

It is clear that the laws protecting perpetrators of abortion are unjust, and yet those who could expose this duplicity remain silent or decry the tactics of those of us who do what we can to save the lives of these babies.

This false narrative is a cultural pox on this nation. The sooner that this disparity is exposed and dealt with honestly, the sooner will our nation heal from all forms of injustice, including discrimination, abuse of excessive force, and brutality.