January 30, 2015
We are proud of the actions of clergy who stand up for the truths of the Church and who, despite backlash from secular society, refuse to back down. This is truly what it means to lead. And we must strive to follow this lead – not only in our own hearts, but with our own voices.

For Catholics, the term shepherd refers to a bishop who leads his flock along the treacherous path created by cultural deviance and sexual saturation. The flock is, of course, folks who are baptized into the Catholic faith, and by extension, the community as a whole. These shepherds are men who recognize the truth that courage is a gift of the Holy Spirit-a gift that should not be caged inside a tolerance box. They are men who are not afraid to speak the truth.

Today we focus on the good shepherds who feed their sheep with the truth according to Catholic doctrine. Such men are rarely cited for their good deeds in the headlines of the New York Times, or for that matter, Fox News! 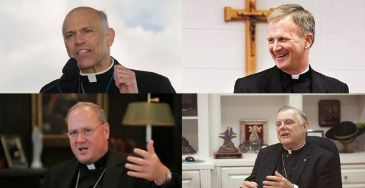 At the top of our list is Cardinal Timothy Dolan. At this moment he is of particular note because of his interview with pro-life leader Rebecca Kiessling. Rebecca was conceived by rape, and according to her own story was nearly aborted by two back-alley abortionists due to her mother's fear of continuing her pregnancy.

During the interview, Cardinal Dolan said two things that make him our number one hero. The first is that it is "preposterous" for anyone to suggest that Church teaching gives anyone the right to vote for or support an exception to abortion such as in the cases of rape, incest, or life of the mother. Second, according to LifeSiteNews,


Dolan also objected to the very idea of the Pain-Capable Unborn Child Protection Act, echoing some pro-life activists' concerns that the ability to feel pain should be irrelevant when considering the value of human life.

"Does that make it okay to stab somebody in the back when they're sleeping, because they can't feel pain?" Dolan wondered.

"Absolutely not," he concluded. "That's ridiculous!"


The cardinal's solid statements of truth come at a time when language is being used to excuse preborn babies from life. We are thankful for his clarity.

Next we recognize Archbishop Salvatore Cordileone, who has set the record straight on the subject of belligerent Catholics like Nancy Pelosi who persist in supporting abortion and/or homosexual marriage. He stated, "The Church's teaching on worthiness to receive Communion has been very clear and consistent from literally the very beginning, going all the way back to St. Paul, who writes in 1 Corinthians that anyone who does not receive the Eucharist worthily-that is, if they're in a state of sin-blasphemes the body and blood of the Lord." Furthermore, to properly receive Communion, a Catholic must, according to the archbishop, "regulate one's life according to what the Church teaches. . . . So it's belief and practice: faith and morals."

One can only hope that pro-abortion, pro-gay marriage Nancy Pelosi listens and discerns the truth before the time comes when she must account to God Himself for her actions and statements.

On a different topic, Springfield-Cape Girardeau bishop James V. Johnston has made it perfectly clear that a Catholic hospital's policy of extending employee benefits to same-sex partners is not in accord with Catholic teaching. Bishop Johnston, referring to Mercy Health System's decision, said: "Recognizing God's plan for marriage is not a matter of 'the Church's position,' as Mercy characterized it, but rather, one of God's own Word."

Along the same lines, Miami's archbishop, Thomas Wenski, recently "sent a memo to all church employees reiterating that any expressions of support for gay marriage-even if it's only a tweet or Facebook post-could cost them their jobs." While it is clear that gay rights organizations and the mainstream media are displeased with the archbishop's reminder about employee policy, it is also a sign that the truth always irritates those who prefer to bury it.

We praise God for the valiant efforts of Catholic hierarchy to confront evil in a way that brings clarity to those who doubt that such truths are unchanging in season and out.

Please join me in commending each of these shepherds. And when you encounter a Catholic bishop doing what is counter-cultural, praise him and thank him personally.

And please communicate your gratitude to these brave men: