February 1, 2014
A video recording of an ice cube touched to the foot of Jahi McMath has been distributed. Someone, perhaps Jahi's mother, says, "I don't understand how a 'brain-dead' can . . ."

I suspect the same or a similar comment would be made by anyone who sees the recording, except a neurologist who participates in the declaration of "brain death."

A neurologist is legally free to declare "brain death" in accord with any of many "accepted medical standards." Jahi was declared "brain dead" in accord with the standard accepted by the neurologists in California. Did a neurologist apply an ice cube to the bottom of Jahi's foot? No. The neurologists, I suspect, would respond that ice cube to the foot is not part of their examination. Furthermore, they would provide a reason for not including it. I could predict their response, but someday they will probably provide their own. 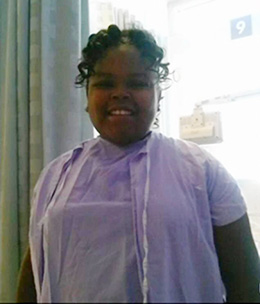 The public must be wondering how Jahi could be dead, and respond by moving her foot when an ice-cube is applied 3 weeks later. Does anyone believe that a cadaver's foot could move? No, Jahi is not in a morgue and she is not under the care of a mortician.

Let's try to understand a few basics about life and death. The following can be applied to Jahi or anyone. Life of a human person on earth is a continuum from true conception until true death. The term, human person, includes human being, zygote, embryo, fetus, newborn, infant, child, kid, boy, girl, man, and/or woman. We are aware of our own existence and we can see other individual living persons.

For life on earth, each person takes in oxygen, water and nutrients. Carbon dioxide is exhaled and waste products are passed in urine and stool.

The living body is composed of cells, tissues and organs organized according to functions as eleven systems. An interdependent functional relationship among cells, tissues, organs and systems maintain the unity of the body, which is a soul-body unity, a life-body unity. The respiratory, circulatory and central nervous system are vital systems. Without the functioning activities of these three vital systems, life on earth will end quickly. Vital signs of a living person are temperature different from that of the environment, respiration, heartbeat and blood pressure. 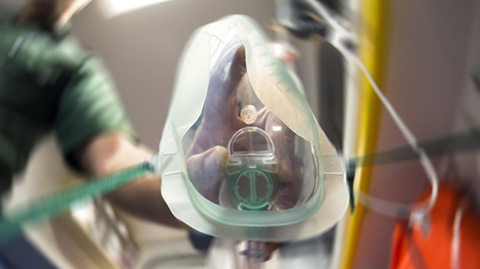 Ventilation and respiration are required for life on earth. Ventilation is movement of air; respiration is exchange of oxygen and carbon dioxide occurring in the lungs and via circulation in all tissues of the living person. During normal breathing muscles of the chest and diaphragm contract to draw air with oxygen into the lungs. Elastic recoil of lungs and chest wall causes the air with carbon dioxide to go out.

If breathing and circulation stop, chest compressions must be initiated quickly for life on earth to continue. Chest compressions can push air out of airways. Then, elastic recoil of chest and lungs causes air to go into the lungs. In addition, a machine called a ventilator can push air in. Elastic recoil of chest and lugs then pushes the air out.

A ventilator is commonly mislabeled a respirator. After true death, neither chest compressions nor a ventilator can be effective. Air can be pushed into the airways and lungs. Elastic recoil might push air out for a few cycles, but then elasticity is gone and air cannot get out. After true death there cannot be circulation and respiration. Chest compressions and a ventilator can support vital respiration only in a living person, not a cadaver.

The heart beats without impulses from the brain in everyone. Heartbeat is intrinsic to the heart. The heart has its own nerves that initiate and continue the electrical impulse that causes heart muscle to contract. The heart has within its nervous system sensors that stop the contraction.

Respiration, circulation, water and nutrition are required for life on earth. When these decrease, the body conserves. E.g., when there is lack oxygen, metabolism switches from aerobic to anaerobic. Anaerobic metabolism is much less efficient, but it is part of natural life-preserving processes.

Without respiration and circulation, health of the person deteriorates and death can and will occur unless breathing and circulation are restored quickly. This deterioration is manifest in cessation of vital activities and the structural changes of disintegration, dissolution and destruction of cells and tissues of organs and systems. These changes can be detected first at the microscopic level, but eventually in death, they become evident as decay, decomposition and putrefaction. After true death, chest compressions or a ventilator can only move air; there cannot be respiration, because respiration is a function of a living human person. Contrariwise, if such efforts at ventilation and respiration are successful, this can be only because soul-body unity is present, i.e., because the person is still living, not dead. Respiration, circulation and heartbeat can occur only in a living person, not a cadaver.

Death is the absence of life from the body. After true death (Latin: mors vera) changes in the remains are manifest as disintegration, dissolution, lysis, destruction, corruption, decay, and/or putrefaction. These are pathological changes, not biological, rather it is lack of biology. 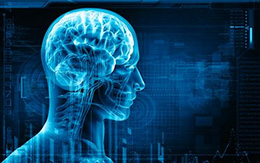 Prior to true death patients are sometimes labeled "as good as dead," "soon to be dead," "brain dead," "cardiac dead," "probably dead," "apparently dead," etc., especially when there is interest to convert such patients into organ donors. None of these patients with heartbeat, respiration and/or circulation can rightly be called a cadaver or corpse. If "probably dead" or "apparently dead" (mors apparens) is applied to a person who is not truly dead, he will certainly be truly dead when the beating heart is cut out. Cutting out the beating heart from any person so described imposes death, in other words, kills the person. To take action that will cause death based on probability is a violation of justice.

After life is absent from the body, the remains is called a cadaver, a corpse, a dead body. The moment of separation of soul from the body is the moment of true death (Latin: mors vera ) and therefore the moment when a human body changes from a living body to a dead body, a corpse, a cadaver (Latin: cadaver). The human cadaver, a corpse, a dead body is thus changed only because it is no longer part of the life-body (soul-body) unity of the living person. When dead, therefore, the body must be significantly changed. Such significant change at first is at the microscopic and/or gross levels of pathology manifest by absence of functioning and structural alteration, sufficient that the life-body unity no longer exists. After death these pathologic changes continue. They cannot be stopped; only slowed or delayed by cooling, embalming, mummifying, salting, etc.

How much change must be manifest before a declaration of death is made? For the sake of justice to protect living persons like Jahi, you and me: No one ought to be declared dead unless respiratory and circulatory systems and the entire brain have been destroyed. Such destruction shall be determined in accord with universally accepted standards. This is solidly based medically and unexceptionable ethically and religiously (Gonzaga Law Review 1982/83; 18(3):429-516, p.515 in Potts M, Byrne PA, and Nilges RG, Beyond Brain Death, Philosophy and Medicine 66, Klewer Academic Publishers, 2000; p.72). 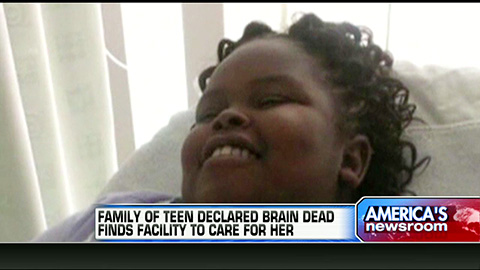 Fr. Peter Fehlner, F.I., S.T.D.and I have studied extensively the teachings of the Catholic Church. Basic biology, physiology and pathology indicate a clear difference between life and true death. This brief statement has been applied to Jahi to provide guidance to help understand these serious matters.