"We shall sodomize your sons, emblems of your feeble masculinity, of your shallow dreams and vulgar lies. We shall seduce them in your schools, in your dormitories, in your gymnasiums, in your locker rooms, in your sports arenas, in your seminaries, in your youth groups, in your movie theater bathrooms, in your army bunkhouses, in your truck stops, in your all male clubs, in your houses of Congress.... Your sons shall become our minions and do our bidding. They will be recast in our image. They will come to crave and adore us.... The family unit-spawning ground of lies, betrayals, mediocrity, hypocrisy and violence – will be abolished.... Perfect boys will be conceived and grown in the genetic laboratory.... All churches who condemn us will be closed. Our only gods are handsome young men.... We shall rewrite history, history filled and debased with your heterosexual lies and distortions.... Tremble, hetero swine, when we appear before you without our masks."


In 1987, AIDS was killing scores of gays every week. This seemed to validate the traditional view of homosexuality as being an acquired personal and social poison (not to mention, dirty and disease ridden). Yet, the traditional Christian belief that homosexuality must be suppressed to preserve society was being abandoned for the mental health philosophy that you have a "right'' to your sexual desires and that since society does as well with heterosexuals or homosexuals, society must be fixed so (especially) homosexual desires can be accomplished.

In 1995 Massachusetts became the first state to ask high school students whether they were LGBT (6% of girls & 7% of boys said they were). In 2004 Massachusetts legalized gay marriage. By 2015, responding to pro-LGBT policies and teachings in the state, 18% of high school girls and 9% of boys (13% of students) said they were LGBT. A year later, Gallup said 15.5% of its 18-25 yr olds were "sexual minorities" and Massachusetts had the highest fraction of homosexuals (after Vermont). Genetically based phenomena take generations to change. What, other than learning, can account for this dramatic uptick in homosexuality in Massachusetts?

When I spoke at Harvard in 1985, besides arguing for quarantining gay blood, I reiterated that homosexuality was more primitive and easier to get into, while heterosexuality, being more sophisticated, needed strong social support to generate sufficient children. I supported the traditional notions that death and destruction sprang from homosexuality while life and growth came from heterosexuality, with empirical evidence. Both I and Michael Swift agreed that homosexuality was acquired: he proud to brag about its power to destroy, I to raise the alarm.

If you accept that children can learn "almost anything," it means that if kids are presented with a "strange deviation" (as homosexuality), some might – for reasons we don't understand, being "ripe for new things" – try or even adopt that thing. LGBTs assume that if kids are told that various historical figures were LGBT, or worse, if kids are told "THIS is how gays make love," given enough students, some will "come our way." The learned component of sexuality is why tradition-held society works best when children are taught "the right way" to live and have sex, and not about sexual deviations: by their parents, in school, and even in entertainment.

Massachusetts started the questionnaire that the federal government now sponsors for the whole U.S. every other year. Of course, just asking the question as to your sexual desires publicizes and tends to legitimate homosexuality. The 1995 results (Table 1) made it clear that even in Massachusetts, the 6% of kids who said they were homosexual (e.g., bisexual/gay) had the worst of it. Compared to kids who said they were straight, homosexuals were more apt to report substance abuse, sadness, suicide attempts, being overweight, etc. Indeed, LGBT kids didn't have the best of it in any respect. Further, they caused lots more trouble for society. They traveled with those who drank and drove, they got into more fights, they were more apt to attempt suicides that involved society having to aid them in some way, and also more likely to (illegally) smoke, drink, or use marijuana.

There are at least two social policy directions you could make, given these findings.You could say: 1) "these poor kids, let's discourage their homosexuality and see if we can push them toward straightness"; or 2) "poor gay kids, what can we do to make them as healthy as straights?" Public health, education, and political officials across the U.S. examined these 1995 results and said "'we must do whatever it takes to make LGBs as healthy as straights." So a series of protections and teachings to bring this about were implemented. In doing so, these officials proceeded as though: 1) sexuality is learned, 2) both sexual preferences are just as good, and 3) society must eliminate these differences. An increase in LGBs was evident in Massachusetts fairly quickly (at least doubling since 1995). This increase meant that Massachusetts would have more problems with bad driving, suicides, and illegal drug use. It does not appear that there was any discussion about the traditional perspective – that bad things just "naturally" accompany homosexuality – as being true. Even though homosexuality among youth was clearly growing, officialdom just assumed both sexual preferences were equally valid, equally good, etc., and went about trying to achieve actual equality of the sexual orientations. That perspective continues.

Gays are on track to "sodomize our sons." (Although our daughters seem to more frequently be buying their advice).

Table 1 shows the results for Massachusetts for 1995, 2005, and 2011. The first 2017 column refers to what all U.S. HS kids called themselves (e.g., straight, bisexual/gay) and the second 2017 column summarizes responses for kids who said they had had sex (the more rebellious). Items LGBs did statistically "worse" on (assuming fighting or rape are bad) are marked with an x. 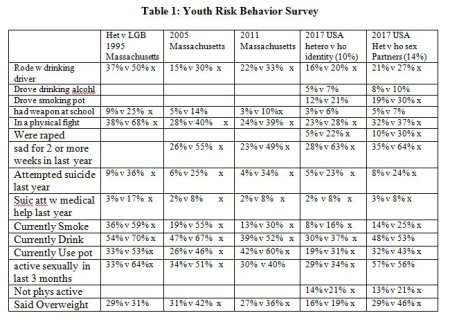 For 2017, kids who reported they actually engaged in sex (14% of whom engaged in homosexuality, as opposed to just saying they were gay [10% of those who gave their "sexual identity"]), were almost always more frequently "in trouble" or "making trouble." There is usually a difference between kids who say they want to do something not quite "right," and those who actually do it. In this case, even heterosexual or straight kids who were having sex in high school were doing more poorly and causing more problems than those kids who said they wanted (eventually) to have sex with the opposite sex, but as yet, hadn't.

Examine the findings over time. While the percentages change from year to year, in 1995 straights were about a third less apt to report having had a weapon at Massachusetts high schools – in 2011, also about a third as apt. In 2005 straight kids were about half as apt to report being sad or feeling hopeless for two or more weeks of the prior 12 months – indeed, so deeply they stopped doing some usual activities; in 2011 they were also about half as apt to make the claim as homosexuals.

The same trends are evident for just about every comparison. Yet, year over year, the proportion of LGBs was growing. Whatever else the programs that were implemented accomplished, more and more Massachusetts high school students were "becoming" gay or engaging in homosexuality. And that meant more and more were reporting "bad" things on the questionnaire. If student reporting was accurate, more and more kids were experiencing or doing "bad things" – apparently due to the policies of their state and school to encourage and protect homosexual kids. The same thing has been happening all across the United States.

Were we talking about kids who smoke, we would generally find the same things (smokers are more apt to attempt suicide, drink, use pot, get into fights, etc., than non-smokers). Yet the same officials who condemn smoking and try to get kids to stop – from a traditional perspective, a rational response – praise homosexual sexual desire as a "basic human right" and go to great lengths to protect it (and in so doing increase it among youth). Following this slogan ("homosexuality is a basic human right"), as though it is "truth from on high," costs society in the shorter term, and if the growth of homosexuality among our youth continues, may well end society as we know it for lack of children.