Christianity warned that homosexual activity should be outlawed because homosexuals recruited (especially kids). In 1950, mental health professionals told congress that homosexuals sought sex with kids, but needed to be cured, not punished. Trans began when the press called a mutilated/hormone-injected gay ‘she’ on December 1, 1952. Five months later, when homosexual activity was illegal throughout the US (and perhaps 1-2% of adults engaged in it, largely in prison), President Eisenhower barred homosexuals from Federal employment.

By 2021, 7% of US adults (including 21% of those born after 1996) were LGBT and a burgeoning trans industry was helping tens of thousands of US kids ruin their bodies (as well as their fertility and futures) to become trans. Early in 2022, President Biden scolded Texas for threatening to prosecute hundreds of parents and the trans industry’s professionals for mutilating kids, since “respected medical organizations [say] gender-affirming care for… children can benefit [their] mental health…. Transgender children bring fulfillment to their parents, joy to their friends, and are made in the image of God.” In addition:

Gay personnel become ‘policy’ when kids are involved: A Disney executive told FRI 20 years ago, that ~40% of Disney’s workforce was homosexual. Since gays recruit gays as co-workers, it is likely higher now. Gays’ aggressiveness is not confined to building up the proportion of gay co-workers, it is also seen in seeking sex with others (especially kids). Their experience teaches that ‘homosexuality is learned’ and do just about everything to push it and thereby expand their choice of partners and allies. Thus, the following by a Disney LGBT employee:

“We at Pixar have personally witnessed beautiful stories, full of diverse characters, come back from Disney corporate reviews shaved down to crumbs of what they once were. …Nearly every moment of overtly gay affection is cut at Disney’s behest, regardless of when there is protest from both the creative teams and executive leadership at Pixar…Even if creating LGBTQIA+ content was the answer to fixing the discriminatory legislation in the world, we are being barred from creating it.” [NYTimes 3/23/2022]

Disney executives realized money comes in when you ‘tend to business,’ rather than try to make a political point. But if kids are involved, the homosexuality of artists often seems too powerful to control. They want kids to be curious enough to ‘try it,’ so they color the world gay, trying to make kids believe homosexuality is fun and normal. In addition, hundreds of its employees demonstrated against Disney because it at first avoided a public stance against the ‘protect younger students from LGBT propaganda’ legislation in Florida.

The LGBT movement is colonizing US education. The annual Pride Week celebration in Austin schools is not only making national news, but according to Texas Attorney General Ken Paxton, breaking state law.

Every year – on school time and budget – there are events to celebrate students who have become LGBT! According to the school district:

“This year’s events started Monday and culminated Saturday with a "PRIDE OUT!" party. Each day of the week had a theme: knowing your rights, creative expression, and Pride history. Pride and ally stickers and flags were handed out.

“By hosting 'Pride Week,' your district has, at best, undertaken a week-long instructional effort in human sexuality without parental consent. Or, worse, your district is cynically pushing a week-long indoctrination of your students that not only fails to obtain parental consent, but subtly cuts parents out of the loop," Paxton said. "Either way, you are breaking state law."

Why the rapid rise in trans? After all, it started with one trans in 1952 and we have around 1-3 million trans today. The Tucker Carlson Fox TV show (3/29) posed an answer. Carlson pointed to the change in propaganda at the Human Rights Campaign [HRC], which he argued, had focused on ‘gay marriage,’ but had to find something else to push when it won gay marriage with the US Supreme Court decision in 2015. Carlson suggested that it switched to touting trans. With a budget of ~$65 million, it was arguably the largest single-issue lobby dealing with sex in Washington, DC (the budget of the National Right to Life Committee, the largest anti-abortion lobby, is ~$8 million).

While transgenders were mentioned in the 1993 March on Washington, the 2007 Hunter College poll of LGBs said ~5% of LGBs considered themselves trans, but did not affix the ‘T’ in LGBs. But around 2015, LGBT made its grand appearance. Did the HRC push trans to inclusion in LGBT?

Almost without exception, THE concern of elected officials is reelection. Lobbies usually give money (legally and otherwise) to both the politician and his reelection campaign. Politicians please those groups that give money. With ~$65 million to hand out or use for propaganda, the HRC had significant potential to influence society. By 2016 LGBT was considerably more frequently in the press, at the UN, and a presence at more than a few schools and classrooms.

While not the only factor (the growth of Facebook, Twitter, etc. were also significant), the push by the HRC apparently worked well enough that the CDC tried to determine how big trans was among students. In 2017, it reported that around 1-3% of high school students claimed to ‘be’ trans. It was also around this time trans became a solidly ‘girl/woman’ instead of its initial ‘boy/man’ thing.

Carlson’s speculation that the HRC was a prime mover of trans cannot be proven. But something that hadn’t even existed until 70 years ago, something that involves gigantic lies about what is done to the body after the operations/injections (which doesn’t transform one sex into the other), is now affecting millions of kids.

Although homosexuality is growing rapidly, key elements of our society have been colonized to assure it grows even faster. Indeed, trans is now large enough to contribute to our declining fertility (recipients almost always become infertile).

The latest polls by both the CDC (for US high school students; Table 1) and Gallup (for US adults; Table 2) fit each other almost like a glove. LGBTs are growing, heterosexuals are shrinking. When might LGBTs be so numerous and heterosexuals too few that our Total Fertility Rate collapses?

Table 1 is from the CDC (MMWR) nationwide studies of US 9-12th graders. Not only has the ‘LGBT/Unsure’ proportion increased in Table 1, whilst each year this ‘minority’ reported more mental distress, drug use, suicidality, etc., etc. than heterosexuals did.

The Gallup efforts indexing adult sexuality (Table 2), particularly for generation Z which is just a few years out of high school, reported 75.7% heterosexual (v the CDC’s 77.5% heterosexual for the younger 9-12 graders), with different samples and methods, registers an almost perfect ‘fit.’ 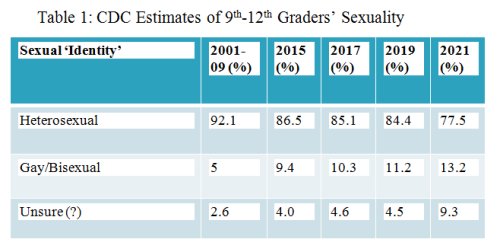 Our society has a rapidly growing problem. Boycotting Disney, as some call for, will but scratch the ever-expanding LGBT threat. When the President of the United States claims the mutilated concoctions called trans are “made in the image of God,” maybe, just maybe, our society should reconsider the Church’s advice, and make homosexual activity illegal again.