The inauguration of Barack Hussein Obama was followed by Tea Parties around the nation that aggregated into the huge September 12 rally in Washington, D.C. And barely two months later, the election of Republican governors in Virginia and New Jersey. In Maine, the voters repealed the authorization of same-sex marriage, an anathema as morally debased as abortion. 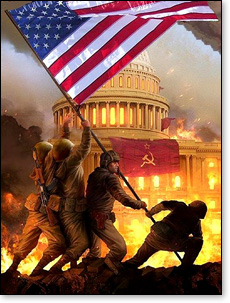 My mind went back to Barry Goldwater's acceptance speech at the Republican convention in 1964. "I would remind you that extremism in the defense of liberty is no vice. And let me remind you that moderation in the pursuit of justice is no virtue."

That speech was given when communism, led by the Soviet Union, was challenging freedom around the world. Lyndon Johnson who had assumed office upon the assassination of John F. Kennedy had initiated the "Great Society," a government program that was the welfare state on steroids. A war was raging in Vietnam. The civil rights movement was gaining momentum.

"This is the Republican Party, a Party for free men, not for blind followers, and not for conformists," said Goldwater.

Barely ten months after the inauguration of Barack Obama, the blinders had fallen from the eyes of his followers and others beguiled by his oratory, his promise of change that proved itself to be the takeover of the economic foundations of the nation, and his weakness in the face of a world filled with the enemies of freedom.

In 1964, Goldwater said, "We Republicans seek a government that attends to its inherent responsibilities of maintaining a stable monetary and fiscal climate, encouraging a free and competitive economy and enforcing law and order."

Today, thanks to a profligate Congress controlled by the Democrat Party since 2006, the economy is in shambles, a free and competitive economy is under attack by massive government programs intended to control one sixth of it, the destruction of private property, and borders that remain unprotected against those who would take advantage of benefits intended for our citizens while destroying their lives with illegal drugs.

"I know this freedom is not the fruit of every soil," said Goldwater. "I know that our own freedom was achieved through centuries, by unremitting efforts by brave and wise men. I know the road to freedom is a long and a challenging road. I know also that some men may walk away from it, that some men resist challenge, accepting the false security of government paternalism."

To read that 1964 Goldwater speech is to be astonished by its prescience and to be inspired by its faithfulness to the fundamental values of what it means to be an American.

That Americanism filled the street of Washington, D.C. and will do so again for as long as it takes to defeat "amnesty," to defeat an apologetic and weak President schooled in the tenets of communism and dedicated to a government in complete control of our lives.

Goldwater could have been speaking of Afghanistan when he said "We are at war in Vietnam. And yet the President, who is Commander-in-Chief of our forces, refuses to say, refuses to say, mind you, whether or not the objective over there is victory."

What followed in the wake of Johnson's election and the subsequent terms of Richard Nixon was the death of some 53,000 young Americans sent into a war where victory remained beyond grasp because of weak leadership, of moderation, and the misjudgment of the enemy's devotion to the cause of communism.

Today, the nation faces the horror of a nuclear-armed Iran and the determination of al Qaeda to destroy us.

Americans recoiled from Obama's world tour of apologies for being the world's beacon of freedom and protector of the peace. "We here in America can keep the peace only if we remain vigilant and only if we remain strong," said Goldwater.

"Those who seek to live your lives for you, to take your liberties in return for relieving you of yours, those who elevate the state and downgrade the citizen must see ultimately a world in which earthly power can be substituted for divine will, and this nation was founded upon the rejection of that notion and upon the acceptance of God as the author of freedom."

A president awarded a Nobel Peace Prize for no discernable reason has discovered a world filled with the enemies of peace and of freedom. He could well have been the subject of Goldwater's call to Republicans and lovers of freedom.

"It is the further cause of Republicanism to restore a clear understanding of the tyranny of man over man in the world at large. It is our cause to dispel the foggy thinking which avoids hard decisions in the illusion that a world of conflict will somehow mysteriously resolve itself into a world of harmony, if we just don't rock the boat or irritate the forces of aggression...and this is hogwash."

A turning point has been reached. Americans will not accept the erosion of their constitutionally guaranteed freedoms, will not accept an all-powerful federal government interposing itself between them and their physicians, will not except the taxation of energy use, and will not accept the "hogwash" of a world we're told will yield to the soothing charade of diplomacy in the face of naked aggression.

To refresh and renew your dedication to freedom, read Barry Goldwater's speech, as fresh today as when it was delivered:
http://www.washingtonpost.com/wp-srv/politics/daily/may98/goldwaterspeech.htm