November 15, 2009
You will recall that, shortly before the end of the 2008 political campaign, the White House announced a threat to the entire financial system and called on Congress to enact emergency spending powers. The Emergency Economic Stabilization Act of 2008 was enacted on October 3, 2008.

Just eighteen days earlier an event occurred that slid under the radar screen of virtually the entire mainstream media. On Thursday, September 15, 2008, at approximately 11 A.M., the Federal Reserve noticed a tremendous draw down of money market accounts in the nation, amounting to $550 billion dollars. It occurred within an hour or two. The money was removed electronically. 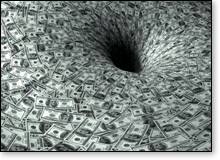 It has never been made public which accounts were affected, nor where the withdrawn funds were sent. If we knew those facts, we would know who launched an attack on the United States that has been more devastating than any in our history.

What followed was the sub-prime mortgage loan debacle that can be traced to the government's intervention into the housing loan marketplace via Fannie Mae and Freddie Mac. They ended up owning fifty percent of all the loans.

Americans were using home ownership as a credit card and government policies were mandating the issuance of bad loans in the name of "social justice." Home ownership became "a right," not an aspiration.

Throughout the 1990s, as communities revalued homes, increasing their alleged worth in order to impose higher property taxes, it was only a matter of time before a financial collapse became a reality. Virtually every State was spending beyond its means and increasing property taxes was the preferred choice to make up the difference.

That collapse, however, was initiated by unknown persons at precisely the time Americans were preparing to select a new president. That was not a coincidence.

In the October edition of "Budget & Tax News," a publication of The Heartland Institute, a non-profit, free market think tank, there was an article by Sandra Fabry, the government affairs manager for Americans for Tax Reform and executive director of the Center for Fiscal accountability, a project of the organization.

The article was titled "61% of National Income Goes to Government."

"Americans this year had to toil until August 12 to pay for federal, state, and local governments, according to the annual Cost of Government Day report by the Americans for Tax Reform Foundation and Center for Fiscal Accountability."

The redistribution of income has reached a point in which 30.36 percent of the money Americans earn is consumed by federal spending. State governments take their percentage as well in income, sales, and other forms of taxation.

It means that Americans worked for 111 days of the year just to pay for the costs of the federal government and federal spending has reached a record 28.5 percent of GDP.

With the passage by the House of the government's attempted takeover of the nation's healthcare system and the up-coming cap-and-trade bill, a massive tax on energy use, there is no telling how many more government spending programs, huge redistribution schemes, Americans will be obliged to pay for.

The Obama administration swiftly embarked on an unprecedented spending spree, "bailing out" General Motors and Chrysler, in effect owning AIG, the insurance giant, and giving funds to various banks to "stimulate" loans, i.e. credit, that Americans and their business enterprises depend upon to function.

Peter Schiff, CEO of Euro-Pacific Capital, has long argued that the problems of the American economy were created by excess credit and debt, and that a massive infusion of credit and debt into the economy only exacerbates the problem. He is right.

The "stimulus" has not worked and the billions still unspent by the program should be returned to the American treasury. Taxes should be cut in order to allow Americans to save or spend their own money. Contracts with civil service and teacher's union should be renegotiated. A vast regulatory revision to remove obstacles to economic growth should be implemented.

Meanwhile the government's "official" figures say 10.2 million Americans are out of work, but the actually figure is estimated to be closer to 17 million or more. Nothing is being done to facilitate hiring with tax credits and reduced taxation of small businesses, nor are the highest corporate taxes in the world being reduced to encourage domestic investment and growth.

And our present difficulties began on September 15, 2008 in a calculated attack that got Barack Obama elected and was immediately followed by all the subsequent efforts to grow the federal government ever larger to make more Americans dependent upon it. The Obama administration has increased the national debt more than all previous presidencies combined.

There is a determined effort under way to undermine the free market capitalist system that made America the greatest economic and military power in the world. Both the White House and the Democrat-controlled Congress are parties to it, but the identities of those who launched that September attack remain hidden.