December 26, 2009
If there is an American remaining who does not understand that the Islamic revolution is at war with our nation and the West, then they are in serious denial.

For general purposes, it began with the Iranian revolution that overthrew a U.S. ally, the Shah of Iran, in 1979 and then took our diplomats hostage, holding them for 444 days. Only recently have we learned that Iran has been providing sanctuary to the family of Osama bin Laden, the founder of al Qaeda, the perpetrators of 9/11 and an earlier attempt to destroy the Twin Towers. 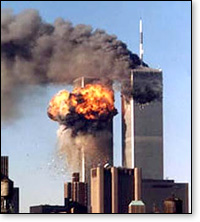 This raises serious questions about the Obama administration's first year in which considerable effort was made to open diplomatic communications with Iran, the primary source of all the conflicts in the Middle East as the guide and funding source for Hezbollah in Lebanon and Hamas in Gaza, and provider of weapons for use against our troops in Iraq.

No Middle Eastern nation is safe from Iran, least of all its obsession, Israel. Its quest for nuclear weapons is not merely just another nation seeking to join the Nuclear Club.

On Christmas day, Abdul Farouk Abdul-Mutallab, aka Umar Farouk Abdul Madallad, a 23-year-old Nigerian and former engineering student at University College in London, attempted to set off an explosive device over the U.S. as Delta-Northwest Flight 253 was soon to land in Detroit.

Eight years ago this past week, Richard Reed, aka Abdul Raheem and Tariq Raja, tried to blow up a flight from Paris to Miami. There is an important message to be understood from these two incidents and it is the contempt for both Christianity and Judaism that Islam has always displayed. It's worth remembering that Israel was attacked in 1973 on Yom Kippur, one of its holiest days.

The other message is that al Qaeda's war on the West and its quest for the establishment of a new caliphate to rule the world is far from over.

The fact that the vast intelligence gathering machinery of the United States, in cooperation with that of many other nations, have not been able to find and kill Osama bin Laden and his colleagues has been a major failure.

In 2007, Strategic Forecasting released a report saying, "All signs indicate this group is no longer functional and cannot be replicated. Whether or not Osama bin Laden is still alive, al Qaeda as it once was is dead."

There are ample signs of life from al Qaeda and events in Somalia and Yemen suggest that some elements of it are still very much alive. One of Osama bin Laden's earliest goals was to replace the Saudi Arabian monarchy.

It does not help that the U.S. Department of Homeland Security has, during the first year of the Obama administration and its Secretary, Janet Napolitano, refused to even use the word "terrorism" throughout 2009. It does not help that President Obama has gone out of his way to display his sympathies for Islam.

What I have found interesting is the way the perpetrators of acts of terrorism against the West frequently involve well educated Muslims willing to die for Islam, but not before killing large numbers of innocent infidels, "unbelievers," in places like U.S. embassies in Nairobi, Kenya, Dar es Salaam in Tanzania, against the citizens of Madrid, London, and, of course, New York.

After attacking the Taliban in Afghanistan following 9/11 and then ridding Iraq of its dictator, Saddam Hussein, I am beginning to believe that former President Bush had a better understanding of the threat of militant Islam than anyone has ever given him credit for. As war-weary as Americans may be at this point, the fact is we have a fairly substantial military engagement precisely where it needs to be in the heart of the Middle East.

Reducing our troop levels now or even in the near future is very likely a very bad idea.

Something is very wrong in the Obama administration's decision to give Khalid Sheikh Muhammad a civil trial in New York. It defies the obvious fact that he is an enemy combatant who should be subject to a military tribunal, not the full rights of an American citizen. The decision goes beyond just being stupid. It makes New York City "ground zero" for another spectacular attack in 2010.

In large and small ways, the Obama administration betrays sympathies for al Qaeda's larger mission and the election of a President who spent several years of his youth in a Muslim nation as the step-son of a Muslim father, and whose very first message as President was an interview with Al Jezeera, the popular television channel that serves the Middle East, does not bode well for our national security.

Al Qaeda has sent America a Christmas message. Are we paying sufficient attention to the one the White House is sending?