Alan Caruba
They destroyed my towers!

September 10, 2010
Whenever I drove into New York via the Lincoln Tunnel, I would join the other cars on the long, graceful curve leading to its entrance and, looking to my left, I could see across the Hudson River. At the tip of Manhattan, the Twin Towers of the World Trade Center stood as symbols of our economic power. 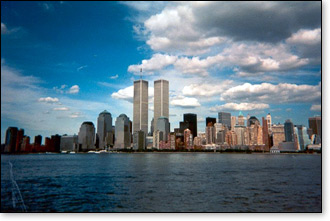 On occasion, I had dined in Windows on the World, a restaurant located on the 106th and 107th floors of the North Tower and marveled at the panorama of New Jersey on one side, the outer boroughs on the other, and the dazzling view of Manhattan.

Whenever I think about September 11, 2001, I have only one emotion and that is a deep, unrelenting anger that a group of murderous, suicidal Islamists destroyed "my towers."

They killed some 3,000 people when you factor in the attack on the Pentagon along with the passengers of the four commercial airliners used to perpetrate the destruction.

It is a wonder to me that Americans then and since exercised such restraint, such tolerance that the nation's small population of Muslims not only did not suffer attacks, but today continue to build mosques for worship.

The effort to build one so close to Ground Zero demonstrates how obtuse and out of touch the political leadership is with mainstream Americans. The odious behavior of New York's Mayor Michael Bloomberg is beyond comprehension. The President tipped his hand at a White House dinner held to celebrate Ramadan, backing away slightly the following day enough to deflect criticism.

Those proposing the Ground Zero mosque demonstrate the arrogance and contempt for Americans and for all "unbelievers" that lies at the core of Islam, but American leaders of varying religions have fallen over one another to excuse this exercise in triumphalism.

The Crusades from 1095 to 1291 were an effort to recapture the Judeo-Christian holy land from Muslim conquest. Having invaded Spain in 711, Muslims would rule for seven centuries until driven out of their last stronghold, Grenada, in 1492. In 1683, Muslims were decisively defeated near Vienna. How different Europe would have otherwise been.

Islam is a religion of the sword despite its widespread acceptance. Its barbarity is on display on a daily basis whether killing Christian missionaries in Afghanistan or Israeli civilians, a pregnant mother, her husband and their two children a week ago.

A sane society would have cleared away the rubble of 9/11 and rebuilt the Twin Towers, but Ground Zero, in terms of new structures nine years after the attack, remains barely begun

Al Qaeda and all those who subscribe to its intent to destroy the West, the civilization developed in the West, and the freedoms championed by the West, remain to be defeated, while they continue to threaten India and even Europe once again.

The further we get from 9/11, the dimmer the embers of anger become for those with short memories or no grasp of history.

The irony is that 9/11 reflects the long memories of many Islamists whose religion demands that all lands formerly conquered in the name of Islam be regained and that all people who follow a faith other than Islam be reduced to dhimmi, second-class citizens ruled by Muslims.

The World Trade Center belonged to the world. They were my towers and your towers. They represented a world bound together in trade, a world that set a value on all manner of goods and commodities, a world in which jobs and wealth were being created.

Today, nine years later, the dispatches from the Middle East, from Afghanistan, the Palestinian enclaves, from Pakistan, from Yemen, and from an Iran bent on acquiring nuclear weapons, are filled with news of an irrational, dysfunctional society; an Islamist rat's nest, still seeking to destroy Israel, and still testing our borders and defenses in order to destroy America.

It is a good day to get angry once more, to resolve that we and the West shall not be defeated.