May 19, 2011
In 1983, the National Commission on Excellence in Education released a report titled "A Nation at Risk" that documented nationwide failure in American schools. Not much has changed since then and the federal takeover of school curriculums and testing methods has mercilessly continued with the Bush administration's No Child Left Behind and the Obama administration's Race to the Top. 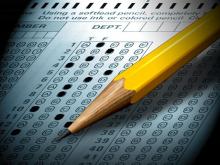 They are the top-down approaches to learning that have played a large part in the continual "dumbing-down" of American education. Once the province of local school boards, innovative schools, and individual teachers, the education of children has been taken over by Big Government.

Making matters worse, amid the confusion of federally mandated education requirements, state legislatures are now straying beyond their traditional roles to tinker with schools in unprecedented ways.

A recent example of this involves two bills making their way through the North Carolina legislature — House Bill 766 and Senate Bill 479 — which focus on testing in that state's public schools. While the motive behind these identical bills may seem to be to "improve" testing, the bills serve only to further dumb-down education through legislative micromanagement.

In the case of North Carolina, the bills not only order schools to administer a specific college admissions test to all students in the 11th grade — the ACT — it also mandates "diagnostic tests" for students in grades eight and 10 that will "align" with the ACT.

In effect, the North Carolina legislature is using the force of law to compel classroom teachers to teach to the test rather than providing a solid education.

Since there is a long established, respected alternative — the SAT — it further reduces the element of choice for local boards.

It begs the question, when does a legislative body possess the requisite knowledge to decide which test is in the best interest of students and their education? Isn't that a pedagogic, not legislative, question?

Even the uninitiated could be forgiven for thinking that this legislation was rigged from the outset and reflects the best bill writing that special interest money can buy, but it gets even worse.

The North Carolina proposal requires that "students who do not pass the tests adopted for eighth grade shall be provided remedial instruction in the ninth grade." Using legislative fiat to push weak students from eighth to ninth grade and expecting them to learn new material when they don't know the old material is a sure fire recipe for utter failure.

Common sense says that not all students at all ages learn at the same pace. Some learn faster than others. Some students come from lower income brackets, are raised by single parents or even their grandparents, and face other socio-economic factors that lead to greater obstacles and fewer incentives to study.

Rather than face this simple truth and deal with it through an effective, flexible policy, North Carolina lawmakers would let struggling students sink even further behind as they are pushed to the next grade level with a vague promise of remedial teaching.

The real problem with such top-down, one-size-fits-all legislation is that, once passed in one State, it spreads to others and, of course, it has its origins at the federal level. That makes it attractive to lawmakers beyond the Tar Heel State where politicians are juggling shrinking state budgets and teacher layoffs with their need for popular poll numbers and reelection.

Education has become highly politicized, providing opportunities for special interests to inject themselves into policy debate. This deliberate dumbing down of education and students has afflicted the U.S. since the 1960s. It shows no signs of being reformed.

Former Attorney General, Edwin Meese III, said, "We must always evaluate policy proposals in light of principles like rule of law and the logic of our constitutional system. The Education Department's sponsoring and funding of national curriculum runs counter to both laws of Congress and the wisdom of the Founders."

The Founders who wrote the Constitution, knowing that the best education was locally determined and directed education, did not even mention the word "education" in that document. If for no other reason than this, the North Carolina legislature should scrap these education proposals and make a fresh start.