August 14, 2011
As bad as the present financial crisis is, how much worse would it be if the enemies of the United States of America, emboldened by a smaller Army, Navy, Air Force, and Marine Corps, decided that they could engage in military aggression against their neighbors with impunity? Or worse. 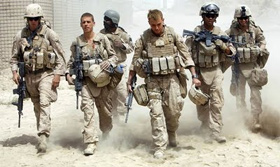 With time out for conflicts in Korea, Vietnam, the former Yugoslavia, Iraq and Afghanistan, the U.S. has played an essential role in maintaining global peace and the safety of the sea lanes. The threat horizon, however, is always changing.

The same week the U.S. was grappling with the aftermath of the Standard and Poor's downgrade of our credit rating, the Chinese announced they were putting an aircraft carrier, their first, out to sea for its initial trials before further retrofitting. Two others are reportedly being built.

In July, the scholars of the American Enterprise Institute, the Heritage Foundation, and the Foreign Policy Initiative got together to produce an 8-page report, "Defending Defense: Warning — Hollow Force Ahead!"

They addressed a number of myths about the U.S. armed forces, among which was that they will "continue to enjoy a technological advantage over any and all adversaries":

"Fact: The Pentagon has nearly skipped a generation of modernization programs while, at the same time, failing to 'transform' U.S. forces for the future. The defense budget growth of the past decade was largely on consumables related to current operations. All of the defense cuts over the past two years mortgaged the future to pay for the present."

"Today's military flies the same basic planes (e.g., F-15, F-16 and F/A-18 fighters' B=52, B-1 and B-2 bombers, and a variety of support aircraft) sails the same basic ships (e.g., Trident ballistic missile and Los Angeles-class attack submarines; Aegis-equipped destroyers and cruisers, Nimitz-class aircraft carriers), and employs the same basic ground systems (e.g., Abrams tanks, Bradley fighting vehicles, Black Hawk and Apache helicopters) that it did at the end of the Cold War."

The former Soviet Union collapsed in 1991, twenty years ago!

Frank J. Gaffney, president of the Center for Security Policy and columnist for The Washington Times, recently warned that "History demonstrates that previous military drawdowns invited aggression by our enemies. After World War I, American drew down forces until the U.S. Army had fewer than 100,000 men in uniform. That weakness invited Nazi aggression in Europe and the imperial Japanese attack at Pearl Harbor. The post-Vietnam drawdown invited the Soviet invasion of Afghanistan and proxy wars for Communist domination from Central America to Angola."

In an analysis by Commander Bryan Clark, U.S. Navy (Ret) and Dr. Dan Whiteneck, written for the U.S. Naval Institute, the authors noted that, unlike the Reagan years that contributed to the Soviet collapse, "the Navy cannot afford to buy 15 or more ships each year." Instead it "can afford to buy about ten and half of those are small combatants or support ships. As a result, the Fleet is now at 286 ships, down from 344 in 1998."

For those who believe the homeland is safe, "the number of ships under way around the United States for homeland defense and training dropped from an average of 60 in 1998 to 20 today."

Air Force data, as noted above, suggests that the fleet of aircraft being used today is in part an old one. A lot of aircraft will be retired, but the money for newer aircraft is going to be harder to come by. Fewer aircraft of all kinds means that the reach of the USAF will be shorter. It takes a long time to train a fighter or bomber pilot, a maintenance crew, and to provide the logistics to keep what we have airborne. No sensible person wants to contemplate what fighting a modern war would be without air superiority.

In January 2011, Spencer Ackerman reported that the Marines are in the line of budget cuts. "The Expeditionary Fighting Vehicle is dead. The Marines' version of the F-35 is on a two-year time-out."

The U.S. military has been fighting in Afghanistan since 2001 and in Iraq since 2003. Ackerman noted that "The stresses of a decade's worth of constant deployment have taken their toil on both services (Army and Marine) in myriad ways: measured in suicide rates and post-traumatic stress, family cohesion, and the missions in Iraq and Afghanistan. Increasing the size of the Army and Marines were (former Secretary of Defense) Gates' way of mitigating those affects."

Not only did the raising of the debt ceiling initiate the decision by Standard & Poor's to downgrade the U.S. credit rating from AAA to AA+, a Heritage Foundation scholar, Kim Holmes, noted that the political deal incorporated spending cuts envisioned to be between 6 percent and 7.5 percent "in defense spending from the President's budget request in February for fiscal years 2012 and 2013, respectively."

"We will have to sacrifice the future security of all Americans," said Ms. Holmes, "without actually getting at the cause of the debt crisis — namely, runaway spending on Social Security and other big social entitlements."

Experts who devote years to studying the nation's defense budget and realities know it is incredibly complex; far more than a brief look can begin to address. For example, part of the defense budget represents increasing health costs that include not only those injured in combat, but the growing number of retirees. Another part of the problem is the bizarre procurement procedures employed.

Then, too, there are new threats such as cyber-war and, as 9/11 demonstrated, non-state terrorism. What are we to make of the Obama administration's Nuclear Posture Review that pledged the United States to not respond with nuclear weapons to a biological or chemical attack as long as the attacking nature was in compliance with the Non-Proliferation Treaty?

There are no easy answers and surely no easy choices, but my guess is that a politically correct military that is now required to accept homosexuals in its midst and will not even publicly identify the Fort Hood killer as a Muslim is in serious trouble, made worse by the reductions in its arsenal of weapons to fight current and future wars.

There will be savings as the Iraq and Afghanistan conflicts wind down, but it would be a familiar and dangerous mistake to reduce defense expenditures, a favorite choice of Democrats. History demonstrates this is always unwise.