February 16, 2012
A lot of things that a President cannot control can gravely affect his chances of being reelected. In 1979, the combination of an oil embargo and the Iranians taking U.S. diplomats hostage ended any hope of a second term for Jimmy Carter.

As this is written, there are 19 U.S. citizens being held hostage in Egypt, but you are hearing little to nothing about that in the mainstream media.

The economy is going to affect President Obama's odds of being reelected this year and Americans who are notorious for gaging the impact of inflation by watching the cost of gasoline at the pump rise are going to blame Obama. An attack on Iran's nuclear facilities and a possible conflict will drive prices through the roof.

If the U.S. was not dependent on imported oil, we could control our own fate, but for decades every effort possible has been made to drive up the cost of automobiles and gasoline, led by environmental organizations like Friends of the Earth and the Sierra Club, two notorious anti-energy foes, in combination with the Environmental Protection Agency.

Little wonder they are in a full war against the Keystone XL oil pipeline from Canada or that the Obama administration has been trying to convince Americans it favors opening access to existing and new oil reserves.

Dan Kish, vice president of the American Energy Alliance, recently took note of the political maneuverings over the American Energy and Infrastructure Act of 2012, saying "At the end of the day, the American people don't care whether federal lands are opened in one large piece of legislation or in separate smaller pieces."

"The bottom line is that the Federal government currently leases approximately 2.4 percent of the land owned by U.S. citizens, while lands equaling ten times the State of Texas are kept off limits by Federal regulators. With reports coming out that gasoline could approach five dollars a gallon by this summer, we cannot wait any longer to begin tapping these resources."

If the Obama administration really wanted to create jobs and improve the economy, it would "lift the embargo on American energy," said Kish, "and open our onshore and offshore resources for robust exploration and development."

"The U.S. Geological Survey estimates that the nation has six times the proven oil reserves of Saudi Arabia"

In 2010, while oil, natural gas and coal accounted for 78 percent of U.S. energy production, its producers received 11 percent of all federal energy subsidies. By contrast, subsidies to the wind industry increased 10-fold, from $467 million in 2007 to $4.9 billion in 2010.

Closer to the pump for Americans was the deal the Obama administration struck with thirteen auto manufacturers in July 2011 to boost new car fuel economy standards from 35.5 miles per gallon (mpg) in 2016 to 54.5 mpg in 2025.

The claim made was that it would save Americans $1.7 trillion over the lifetime of vehicles and $8,000 per vehicle by 2025. Higher gas prices as the result of increased costs of imported oil and higher automobile prices that will result from this deal will cancel out any alleged savings.

Who wants to be fooled again by this administration?

And what business is it of the federal government how much mileage an auto gets?

The U.S. government has been messing around with the fuel economy program — believe it or not — for forty years. The result was the rise in sales of Japanese auto companies and European imports while Detroit saw General Motors and Chrysler come so close to collapse they had to be bailed out with billions of taxpayer dollars.

The culprit has been the Corporate Average Fuel Economy program and Marlo Lewis of the Competitive Enterprise Institute calls it "a case study of unintended consequences. If the fuel-saving technologies requisite to meet the new standards are such a great bargain, why do we need a law forcing automakers to adopt them?" Good question!

Both the Environmental Protection Agency and the Department of Transportation crowed that "Today's announcement is the latest in a series of executive actions the Obama administration is taking to strengthen the economy and move the country forward because we can't wait for Congressional Republicans to act." That's right, they blamed by-passing Congress and the deal on Republicans!

Meanwhile, the only thing CAFE standards accomplish is an increase in the cost of automobiles and a decrease in the safety of their occupants as cars are forced to be lighter and more vulnerable in a crash. 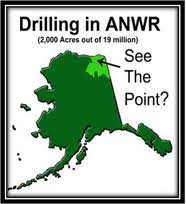 In a February 2nd opinion published in The Wall Street Journal, Alaska Governor Sean Parnell welcomed news that Congress might finally be moving in the direction to permit Americans benefit from access to their own oil.

The other way Americans have been forced to pay more at the pump have been the mandates for the mix of ethanol in every gallon of gasoline. Why? Because its advocates claimed that this would reduce carbon dioxide (CO2) emissions, but in fact ethanol increases CO2 emissions while at the same time reducing the mileage of every gallon of gasoline. And there is absolutely no scientific justification for reducing CO2 emissions because the mandate is based on the totally debunked global warming hoax.

The cost of building new oil refineries in America was increased exponentially by the Clean Air Act of 1970. There have been no new refineries since 1976. There are currently 149 refineries in the U.S. Requiring them to make different blends for different regions of the nation has done little more than to drive up the cost at the pump. The taxes on gasoline have been a bonanza for the federal government and the states.

The good news is that two new refineries are being developed, one in Yuma, Arizona, and one in Union County, South Dakota. The bad news is that Sunoco Inc has just announced it will continue to exit the refining business due to the lack of profitability. In business for 117 years, Sunoco has been gradually shifting out of refining, reducing its capacity 43 percent since 2009.

Come November, if drivers of cars are shelling out $5 a gallon at the pump, a lot of voters are going to be very unhappy. If our citizens are still being held hostage in Egypt they will be even less happy.