March 13, 2012
Back in 2001 I wrote a four-part series on "The Subversion of Education in America" and more than a decade later not much has improved. The causes are easily identified. One is federal control and the other is the National Education Association (NEA) which, despite its name, is a union. 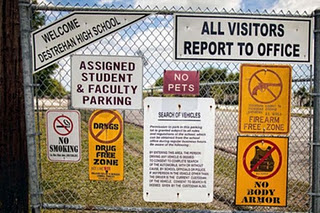 Governor Chris Christie of New Jersey became a nationally known figure when he took on the teacher's union for the way contracts with generous pension and health benefits were bankrupting the State. Other civil service contracts also came under review for the same reason.

A recent headline in The Wall Street Journal caught my eye. "No-Child Law Faces Wave of Opt-Outs" reported that "Twenty-six more states asked to be excused from key requirements of the No Child Left Behind Act, an exemption that would curb the education law's impact considerably." If the Obama administration grants waivers to all the new applicants, three quarters of the states would be exempt.

The federal Department of Education is a legacy of the failed Carter administration, signed into law on October 17, 1979 and given Cabinet level status. Generally speaking, the NEA made sure it was run to suit its purposes, not that of parents and students.

The best thing a new President and Congress could do for America would be to eliminate the DOE, returning the oversight of educational systems to the States. Clearly, when three quarters of them want out from the No Child program, something is very wrong with it.

Indeed, what is wrong is the notion that education is a one-size-fits-all proposition. Any parent and any teacher can tell you that children individually learn at different rates, have individual strengths and weaknesses that require something other than a federal straight-jacket. No Child is a legacy of the Bush43 administration; proof that no matter who's in charge, education should not be a federal department.

What the federal government does is redistribute money and at a time when it is broke the notion of spending billions it does not have begs the question of who gets to waste it.

In 2010, the government "invested" $3.5 billion "in an effort to fix the nation's bottom five percent of public schools and in 2011 it spent another $546 million through the School Improvement Grant (SIG) program. The funds were available to schools that were "eligible for up to an unprecedented $6 million per school over a three-year period to implement one of four reform models."

Don't expect much. It has been known for decades that schools in highly segregated, low-income, urban areas; those with more than half of their students representing African-American and Latino populations are the ones in trouble. Their problems are, as often as not, related to cultural attitudes and language difficulties. The student's problems begin in their homes and transfer into the classrooms.

Our schools have been turned into minimum security prisons with increasingly intrusive policies regarding every aspect of student's lives, from the lunch they bring to school to proposed intervention in their lives off campus. Pre-school programs, often mandatory, have a long history of failure. Parents are under pressure to transfer their control over the lives of their children to schools. It is authoritarian. It is un-American.

So what was deemed an important DOE priority in 2011? Last year it was crowing about its "Green Ribbon Schools" program "to recognize schools that have taken great strides in greening their curricula, buildings, school grounds and overall building operations." Slapping some solar panels on the roofs of schools does nothing to improve the quality of teaching and learning in the classrooms below.

The NEA wants you to know that "the teaching profession has changed dramatically over the past fifty years." That's why it is sponsoring National Teacher Day on May 3rd. Astonishingly, the NEA admits that "45% of new teachers abandon the profession in their first five years"; apparently without understanding why.

How bad are our nation's schools despite the federal largess and their "greening"? In a report issued in February, the National Center for Policy Analysis, "Restructuring Public Education for the 21st Century," noted that "Students in dozens of other countries, including China, South Korea, Germany and Finland, outperformed American students in reading, math, and science, according to the Program for International Student Assessment in 2010.

"The United States ranked 23rd in science, 17th in reading, and — worst of all — 31st in math." The dropout rate nationwide wavers between 30 percent and 40 percent with urban center dropout rates as high as 80 percent.

As for those who do graduate, some 76 percent, those who go onto a college education as often as not must first take remedial courses to bring them to a level where they can begin to acquire a higher education.

What happens then? According to the Center for College Affordability and Productivity, "61 percent of folks with a student loan are not paying" whether they are in school or have graduated. That adds up to an $870 billion outstanding balance, akin in ways to the nation's mortgage crisis. Will public funds be tapped to "bail out" colleges and universities? Probably.

The nation's educational systems are imploding from pre-school to kindergarten, elementary to middle to high school. Entire generations are either dropping out or graduating without the skill levels to compete in a world where students in other nations are learning how to run circles around their American counterparts.