Alan Caruba
Destroying our military from within

If you want to know how President Obama feels about the U.S. military, consider that in all the years since D-Day 1945 there have been three occasions when a President failed to go to the D-Day Monument that honors the soldiers killed during the Invasion. 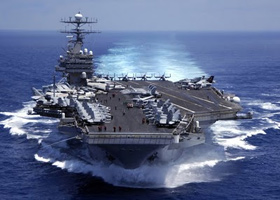 For the past 68 years, all Presidents, except Obama, have paid tribute to the fallen soldiers killed on D-Day. This year, instead of honoring the soldiers, he made a campaign trip on Air Force 1 to California to raise funds for his reelection.

The U.S. military has been systematically weakened from within by a combination of idiotic and duplicitous decisions that suggest how far the nation has come from the fundamental understanding that an enemy must be destroyed with sufficient devastation as to never contemplate attacking us or our allies again.

World War Two was a success because both Germany and Japan were required to sign instruments of unconditional surrender. Both nations are now our allies. Even Vietnam where the U.S. blundered into a civil war and was ultimately forced to withdraw now has normalized diplomatic relations and welcomes U.S. investment.

The wars in Iraq and Afghanistan remain inconclusive due to a combination of timid rules of engagement and the transformation of our military's mission into "nation-building" that have yielded unsatisfactory results.

The military force that distinguished America as a super power at the mid-point of the last century now is facing draconian funding reductions from a Congress unwilling to make hard decisions about our historic debt.

A July Wall Street Journal editorial, "The Coming Defense Crack-Up," warned the automatic sequestration, "If implemented, the Pentagon budget would be cut by another 9% (or $492 billion) over the next decade, on top of the $487 billion in cuts that are already planned. Defense accounts for the largest share of total sequestration, or 42.6%m according to the Congressional Budget Office."

"The sequestration cuts would leave the defense budget some 30% smaller in 10 years." Does anyone believe that the world will be any safer in two years or ten years? Or that weakening our defense will make us safer in a world bristling with nuclear arms and other weapons of mass destruction?

If the sequestration cuts are pure folly, then the use of our defense forces as a means to avoid "global warming" is sheer insanity. There is no global warming insofar as the Earth entered a natural cooling cycle in 1998 and the claim that carbon dioxide is "causing" global warming is completely baseless. A tiny element of the Earth's atmosphere — 0.038% — carbon dioxide (CO2) has been the excuse environmentalists have used to attack our manufacturing and energy sectors. Now it is being used to render our military weaker through a requirement to use biofuels.

On October 8, 2009, President Obama issued Executive Order 13514, ordering the Defense Department and other agencies to reduce CO2 and other so-called greenhouse gas emissions. He set a goal of having the ships that defend our nuclear carriers powered by biofuels.

How stupid is this? First of all, America sits atop enough oil reserves to make us energy independent if the Obama administration would permit exploration and extraction domestically and offshore. The U.S. Geological Survey reports that the U.S. possesses 26% of the world's oil supply. The Obama administration assertion that the U.S. has only 2% of the world's supply is a lie.

There is zero need for biofuels. By 2020, the Navy has been instructed to use alternative fuel for half of its consumption. A recent naval exercise cost the Navy $27 per gallon of biofuel, versus $3.50 to $4.00 for standard petroleum fuel. As this is being written, Americans are required to use ethanol, a biofuel, in every gallon of gas they put in their cars, needlessly increasing the cost with no benefit in mileage and at the risk of damaging their car engines.

The Air Force is also subject to these mandates for biofuels that cost more than $26 per gallon, compared with standard jet fuel at $4 per gallon. Both the Navy and Air Force face the prospect of having to refuel ships and planes in potential battle zones where every gallon of biofuel would have to be transported from the U.S. for lack of biofuel refineries in Asian, Mideast or Mediterranean ports. Can you spell d-e-f-e-a-t?

These biofuel mandates are part of the Obama administration's crony capitalism that has seen "alternative energy" lose billions in loan guarantees to solar companies and the government mandates that maintain the wind power industry that, like ethanol, would not exist without federal government support.

Phil Dunmire, the national president of the Navy League of the United States, on July 18, warned that "The defense and maritime industries are being jeopardized from within" noting that "programs related to our nation's defense will absorb half of the sequestration costs despite being just 19% of the national spending budget." These cuts go into effect in January!

The sequestration and other budget cuts, and the global warming biofuel mandates will leave the U.S. more vulnerable to attack and defeat since the end of World War Two. Our Navy has shrunk. Our combat air fleet is old. The manpower of military forces has been reduced and subjected to restrictions that leave every soldier and marine subject to investigation for every enemy they kill.

The exception to the long engagement in the Middle East was the successful killing of Osama bin Laden, but even that was tarnished by a President who took full credit for it and released information about it that runs contrary to the safety of all comparable future missions. Within days, the White House provided a briefing on it to a Hollywood producer and writer in order to facilitate a film lauding the mission.

The greatest force for the defense of the nation and for freedom in the world is being reduced by a Congress and a White House who refuse to recognize the threats that exist in a dangerous world.