September 16, 2012
Amidst the graffiti on the wall outside the U.S. embassy in Cairo, one of the rioters scrawled "1.5 Billion Bin Ladens." Last time I heard, the last thing bin Laden saw was a member of Seal Team Six just before he took a bullet to the head. That is the way a nation that has been attacked responds to the murder of nearly three thousand of its citizens. 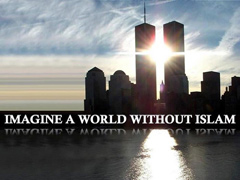 To suggest, as the White House keeps saying, that rioting in more than twenty-five mostly Muslim nations is the result of some amateur film that no one has seen reveals an administration that thinks Americans are stupid and unaware that President Obama's foreign policy in the Middle East is responsible for the crisis that has killed our ambassador to Libya and others. A compliant mainstream news media continues to report this fiction.

At the heart of events is the intention to create a Muslim caliphate stretching across the Middle East, Northern Africa, and into Southeast Asia. One that will stretch into Europe and, presumably, America. The aim is to establish governments in which Sharia law will replace any remnants of democracy and freedom. It is being aided and abetted by Barack Hussein Obama.

I don't want 1.5 billion Muslims to die. I just want them to stop attacking America, the West, and each other. The likelihood is that many, if not most, Muslims find the rioters an offense to Islam, but if they said so out loud, they are just as likely to become a dead Muslim. No other faith of the many on planet Earth requires its faithful to make war on everyone that is not a Muslim.

There is no making peace with the more radical elements of Islam for whom dying as a martyr is so appealing they believe that killing other people is worth strapping on a bomb.

The history of Islam reveals a pattern of conquest by a cult that venerates a self-proclaimed prophet.

In 612 AD, Mohammed began to preach his new "religion." It was a patchwork of what he knew of Judaism and Christianity with a mix of local pagan faiths. Its greatest appeal was that it endorsed the pillage of caravans and then of tribes as a means to acquire wealth. It permitted men to have several wives and reduced women to chattel. If you were a malcontent forever looking for someone to hate, you were instructed to hate — and kill — all non-believers in Allah.

In 632 AD, Mohammed died. His followers launched "holy wars" to spread Islam and, in the process, created the schism between Sunnis and Shiites concerning who was Mohammed's rightful successor. They still disagree and, as we have seen, do not hesitate to kill one another.

By 638 AD, Muslims had conquered Jerusalem and, within a few decades, controlled an empire stretching from Libya to Afghanistan, a landmass that includes modern day Egypt, Syria, Iraq, and Iran.

In 673 AD, the first Muslim attack on Christian Constantinople was repulsed. Having established Islam throughout northern Africa, Muslims invaded Spain in 711 AD where they would remain for seven centuries until driven out. When they tried to go farther north in Europe, they were stopped at Poitiers, France in 732 AD.

Between 1095 and 1291, led by the Catholic Church, a series of crusades ensued. The latter ones were more successful, recapturing Jerusalem in 1099. Saladin would recapture it in 1187 AD. In 1453 AD, Constantinople fell to Ottoman armies and the Church lost its base in the Middle East. Rome would become its capitol.

Thereafter the greatest threat to Europe was the Ottomans, but in 1683 their army was decisively defeated near Vienna, ending any expansion. It would not be until World War I that the Ottoman Empire would be dismembered by Britain and France.

Muslims have long memories and still resent the loss of Spain despite their spread into India and parts of Asia. When Israel declared itself an independent nation in 1948 those memories were inflamed because Islam does not cede land it once controlled.

In the modern era, the West has mostly sought to control the Middle East through the proxies of various despots, but that has not always worked out as they wished. After invading Afghanistan the Soviet Union collapsed when they were driven out. They lost control over satellite nations in Eastern Europe. The U.S. is seen as losing the wars in Afghanistan and Iraq.

Militant Islam is on the rise again, driven in large measure by Iran, but also funded and encouraged by Saudi Arabia despite its reliance on American military power to protect it. The present turmoil has nothing to do with a quest for democracy and freedom.

In Egypt the overthrow of Hosni Mubarack put the Muslim Brotherhood in charge and President Obama had signaled his support when he gave his apology speech in Cairo in 2009. He then supported the overthrow of Libya's dictator.

In all likelihood, Israel will have to mount a military mission to damage Iran's nuclear program. If it does not, it will be destroyed. After Israel, America will be next. So let's root for Israel even if the present administration does not.

America responded to the 2001 attack on 9/11 with military action in Afghanistan and Iraq. It did not pursue these wars as we once did against Nazi Germany or Imperial Japan in the last century which ended with the demand for an unconditional surrender and a long occupation.

That's going to be hard to achieve as President Obama continues to reduce our nuclear arsenal and massive budget cuts to our military power kick in. Those who think that America can withdraw from the Muslim turmoil and aggression behind two great oceans are wrong. We could not do that in the 1940s, we could not do that in 2001, and we cannot do it now.