Alan Caruba
California is destroying itself. The U.S. is next.

November 18, 2012
There's a very entertaining, but terrifying book by Laer Pearce, "Crazifornia: Tales from the Tarnished State — How California is destroying itself and Why It Matters to America." I recommend everyone read it because it lays out the template for why California will go belly up and why the nation is at the precipice of doing the same thing. 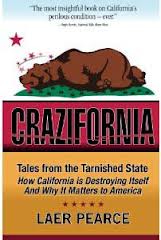 For some thirty years the author has been helping corporations and local government agencies cope with California's regulatory jungle. As he puts it, "Crazifornia reveals a state that has become so misdirected, ungovernable and untenable that the primary driver of change has become the catastrophe." Following the recent elections a recent Wall Street Journal editorial opined, "So now Californians will experience the joys of one-party, union-run progressive governance."

Though it may defy belief, Californians voted to let the state tax them more to 13.3% and they gave Democrats a supermajority in both houses while killing a ballot initiative that would have barred unions from automatically withholding money from worker paychecks for political spending. The public service and other unions own California. Add that to a history of progressive politics and you have a recipe for the total disaster that confronts the state and the nation these days.

Laer calls it a laboratory for liberals. "California has become tax-crazy, imposing the nation's highest unemployment tax and personal capital gains tax rates. And it's near the top on income taxes, corporate tax rates, and corporate capital gains tax rates." If this sounds like where America is heading if the Bush tax cuts are not extended and as the many hidden Obamacare taxes kick in, you're right. And the only thing the President keeps talking about is taxing the rich who he defines as anyone earning $250,000 or more. For the record, $250,000 is only one quarter of a million, despite his blather about millionaires and billionaires.

Laer points out that California's taxes are currently causing 150,000 residents to flee the state each year. "In fact, Los Angeles alone has lost more households than New York, Miami, and, incredibly, the economically decimated city of Detroit...combined."

How crazy are Californians? They have amended California's constitution 513 times in 130 years or almost four constitutional amendments each year, year in and year out, since the state was founded. By contrast, the U.S. Constitution has been amended 28 times since it was ratified. That includes the ten Bill of Rights amendments introduced in 1789 by James Madison and included in 1791.

What do the Californians get for their taxes? Not much. It ranks 48th among the states in elementary school rankings in reading and 49th in science. Not much value for the high rate of per-pupil spending. Its teachers are the highest paid in the nation.

California's public workers are the second highest paid in the nation. The unfunded liability of their pensions and health-care benefits is estimated by Stanford University to be $500 billion — a half trillion dollars. If you love bloated bureaucracy, you will love California.

California's obsession with spending on every liberal program proposed is such that, by 2009, the government was so much in debt it began to issue IOUs instead of wages. Its unemployment rate had risen to more than 12%, the highest figure in 70 years. Currently, the state has $73 billion in outstanding bonds for capital projects and $33 billion in voter-authorized bonds that the state hasn't sold because it cannot afford higher debt payments.

The result of this fiscal insanity is that "In 2010, at least 204 companies said goodbye to the state, exactly four times more than fled in 2009. The exodus surged to more than 280 companies in 2011, when they left the state at a clip of 5.4 companies per week." This just leaves joblessness and economic stagnation in its wake.

In addition to its unions, the other factor pushing California into the grave has been its obsession with the environment. Unelected green regulators, influenced by environmental lobbyists, celebrated when a Green Chemistry Initiative passed in 2011. It is 92 pages that list chemicals that cannot be used in manufacturing or anything else.

Despite the fact that there is no global warming, the California Global Warming Solutions Act of 2006 requires the state's "greenhouse gas emissions to be reduced to 1990 levels by 2020." One single volcanic eruption will negate all of it and California has four of them.

The Environmental Protection Agency Administrator, Lisa Jackson, speaking in 2009 at the Governor's Global Climate Summit in Los Angeles, said that all fuel economy and greenhouse gas standards have their "roots" in California and the rest of the nation is finally "catching up with what's happening" there.

In November, California's cap-and-trade program kicked in and businesses will be charged for emitting carbon and thus passing the costs along to consumers. It mandates a 30% reduction in emissions from cars, trucks, utilities, and other businesses by 2020.

As a result of the 2006 Global Warming Solutions Act, the Governor's Office of Small Business concluded that implementing the law will cost an average $3,857 per household and $49,691 per small business. In jobs alone, it will cost 1.1 million as companies leave and tax revenue as people leave with them.

Carbon dioxide is essential for the growth of every form of vegetation on Earth and thus all live on Earth. It plays no role in the climate, nor of any warming which comes solely from the sun.

California's Legislative Analyst estimates that the cap-and-trade scheme will cost businesses as much as $14 billion a year.

California is seeing its refineries close and its utilities able to provide only two thirds of the energy its citizens require to turn on the lights. This is happening in a state that was once a giant in oil and gas production. Between 1960 and 2010, California's population more than doubled from 16 million to 38 million, its freeway system expanded, and its electricity demand increased five-fold.

The EPA will shortly announce a slew of new regulations that will have the same effect on the rest of the nation, only there will be no place to go for most Americans.

As the nation faces a "fiscal cliff," Laer wrote that "The state's education and fiscal systems and its economy all have collapsed, yet in the face of these serial calamities, the state hasn't fixed anything."

As of this writing, Congress has done nothing to save America from the fiscal collapse facing the rest of us.