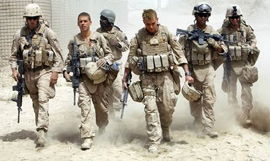 In the preamble to the U.S. Constitution, among the priorities listed is to "provide for the common defense" of the nation. After having fought a six-year war during the Revolution and replaced the failed Articles of Confederation, the framers of the Constitution, many of whom had fought beside George Washington, well understood the need for a standing army and navy to protect the new nation.

In recent times, two Presidents, Clinton – a draft dodger – and Obama have had no military experience to draw upon. Over the objections of their generals, both introduced policies to include and protect homosexuals in the U.S. military services. Now the doors have been opened to permit women to fight beside men. The military is not a place where one conducts social experiments. It's a place where men go in harm's way to protect the nation.

Today, thanks to the failure of the Congress to address America's spending and growing debt problems, the U.S. military faces a draconian "sequestration" – massive cuts to the defense budget – that would so seriously decrease the nation's ability to defend itself and project power globally, that it reminds one of the failure to maintain a strong military that required a massive effort to get up to speed after the Japanese Empire's attack on Pearl Harbor in 1941. The WWII declaration of war included the Nazi Third Reich that threatened the United Kingdom, all of Europe, and Russia.

A recent Rasmussen Reports poll found that 40% of likely voters "believe the United States spends too much on defense and national security" while only 22% disagree and 32% believe the amount spent is about right. This is a definition of stupidity.

A nation requires a standing army, navy, coast guard, and air force, along with a trustworthy banking system. After the 2008 financial crisis – the result of government policies regarding housing – we had to bail out the banking system to the tune of billions. Today we face the prospect of a military that is flying an aging fleet of airplanes, has a navy that has as few ships in service as we had at the end of World War I, and a volunteer military that requires that support of thousands of civilian personnel.

Out-going Secretary of Defense, Leon Panetta, has been loudly warning that the result of any spending cuts would be "catastrophic."

One can argue that we have spent a fortune in treasure and blood in the Middle East since 2001, but only the most foolish would argue that America and the West is not facing the greatest threat in its history since Moslem armies were defeated at the doors of Europe in 732 AD and 1529 AD.

In a recent press conference, Panetta said that the practical results of the proposed cuts in defense would be less training for units not imminently deploying to Afghanistan; less shipboard training for all but the highest priority missions; less pilot training and fewer flight hours; curtailed ship maintenance and disruption to research and weapons modernization programs. He described it as the hollowing out of the defense force of the nation.

Noting that members of our military are fighting and sometimes dying to defend our nation, Panetta said, "Those of us in Washington need to have the same courage as they do to do the right thing and try to protect the security of this country. We must ensure we have the resources we need to defend the nation and meet our commitments to our troops, to our civilian employees, and to their families, after more than a decade of war."

Courage and common sense are two elements that are missing in Washington these days.

Retired General Paul E. Vallely, U.S. Army, states the case bluntly. "President Obama is working very hard to destroy U.S. military superiority, consciously and unconsciously to the advantage (of) our global enemies in an attempt to seize control over national security and (in) another overt attempt to bypass Congress, the Obama administration may have already made this play as of this writing."

Joined at the press conference by Army General Martin E. Dempsey, chairman of the Joint Chiefs of Staff, Gen. Dempsey described sequestration as "a self-inflicted wound on national security," bluntly saying it was "an irresponsible way to manage our nation's defense. It cuts blindly and it cuts bluntly. It compounds risk and it compromises readiness."

Americans are largely unaware that our air fleet is the oldest in Air Force history, worn down by two-plus decades of combat dating back to the 1991 Gulf War. The average age of the fleet exceeds a quarter of a century. The U.S. Navy is a mere shadow of itself. Under normal operations one third of the fleet is in repair, one third is in port for the rest and relaxation of sailors, leaving approximately 90 ships to patrol the seven seas to protect American interests. There are about 800,000 civilians that provide support to our services and nearly 1.4 million in the active-duty military.

We have until March to know whether Congress will take action to repeal sequestration and replace it with the steps everyone with a lick of sense knows must be taken; reforming the nation's tax code, reforming Social Security, Medicare and Medicaid to avoid their impending failure, reductions in the spending and borrowing that has imposed more than $16 trillion in debt, and reform of the spiraling avalanche of regulations that are choking the nation's economic recovery.

How serious is it? Gen. Dempsey warned that operations, maintenance and training will be gutted. "We'll ground aircraft, return ships to port, and sharply curtail training across the force. (We) may be forced to furlough civilians at the expense of maintenance and even health care. We will be unable to reset the force following a decade of war."

"Within a year, we'll be unprepared," said Gen. Dempsey.