Alan Caruba
The economy is a lot worse than you think

January 31, 2013
Most Americans know the economy is in bad shape even if a majority voted to reelect the man most responsible for making a bad economy worse. And, no, it was not George W. Bush who is responsible for the 2008 financial crash. It was the government with its housing programs that encouraged giving mortgage loans to those who could not afford them and then bundling those "toxic assets," and selling them to banks who then found themselves in trouble for investing in them. 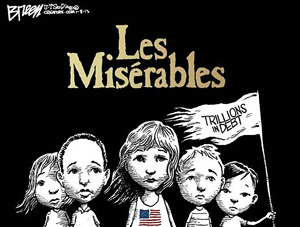 Another partner in the nation's financial woes has been the Federal Reserve, a banking cartel given the right to literally print money. The Fed recently released the fact that its holdings in U.S. government debt has increased by 257 percent since President Obama took office! Those holdings are at an all-time record of $1,696,691,000,000 at the close of business on Wednesday, January 23. The other major holder of our debt is China at $1,170,100,000.000.

It's worth taking a few minutes to see how the policies of President Obama, whether a deliberate effort to ruin the economy or just the result a lack of understanding of how the U.S. economy works, has put the U.S. on the precipice of failure comparable to what is occurring in Europe. It is a global, as well as national problem as the central banks of the EU desperately transfer billions among themselves to stave off a catastrophe that will destroy the wealth of their citizens.

The federal government ran a deficit (the difference between what it owes and what revenues it takes in) of $292 billion for the first two months of fiscal year 2013 – October and November 2012 – amounting to $4.8 billion of borrowed money every day. The Congressional Budget Office reported that federal revenues rose by $30 billion – a ten percent increase over last year – but spending increased even more, going up by $87 billion (16%).

Spending on Medicare, Medicaid, and Social Security was about 7% higher – $8 billion than last year. For years, Congress has resisted reforming these "entitlement" programs and Obamacare has only exacerbated the problem. In order to fund its establishment, the Obama administration took $716 billion from the Medicare funds. The Social Security funds have been "borrowed" by Congress for years while the numbers of eligible senior citizens has steadily increased as "baby boomers" come of age.

Add in all the other taxes we pay on gasoline, telephones, and other necessities, and the middle class is being tapped for half their earnings.

The Republican Party, in power in the House of Representatives, has offered legislation to bring some relief to middle class and other taxpayers. It has sent annual budgets to the Senate where they have died for the past three years.

All this has been happening during the first term of the Obama administration. In a January 25th commentary posted on AmericanThinker.com, Steve McCann noted that "As of the end of 2012, the United States has experienced the worst five-year period – which includes, as the end of the final four years, Obama's first full term – since 1928-1932 and the start of the Great Depression."

McCann cited that fact that, since January 2008, the employment age population has increased by 11.7 million, yet there are 3.0 million fewer Americans employed. "Factoring in the population growth and 2008 labor participation rate, the unemployment rate for December 2012 would be 11.4% as compared to 4.9% in December of 2007."

There are other stark statistics that the mainstream media tends to under-report. In December 2007, there were 26.5 million Americans on food stamps at a cost of $30 billion. By December 2012, 47.4 million were using this program and the federal government was running advertising to get more to apply for it. During Obama's first term, food stamp recipients increased at a rate of 11,133 per day!

No matter how one measures the U.S. economy, the news is bad and holds little promise of improving. Economic growth is anemic as Obama increased debt $50,521 per household in his first term, more than the first 42 presidents in 53 terms combined.

An excellent monthly publication, Budget and Tax News, published by The Heartland Institute, is a very good way to gain the information and insight you need to understand these issues.

No need to wonder why Obama wants to increase the debt ceiling and no need to wonder why his policies continue to cripple the economy, whether it's the failure to approve the Keystone XL pipeline or to rein in an avalanche of economy-killing regulations from the Environmental Protection Agency. Obamacare contained 18 hidden taxes when it was passed by a Democrat-controlled Congress that didn't even read its more than 2,000 pages.

At some point this combination of increased taxes, low employment, and stagnant economic growth has to implode. That outcome can be avoided, but the nation is running out of time.