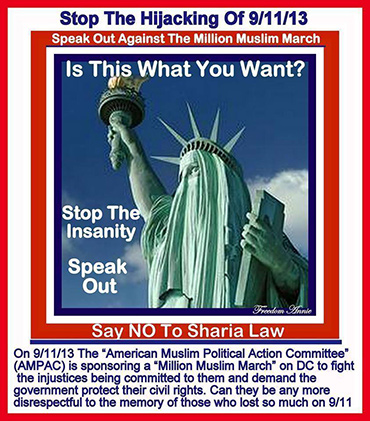 There is more than a little irony that September 11th is designated Patriot Day when the Obama administration has made it clear what it really thinks of patriots.

It is astonishing and frightening how many Americans have been identified as "potential terrorists" or "extremists" by various elements of the government. Michael Snyder found 72 types of Americans fall into this category and they include "anti-gay," "anti-immigrant," "members of the Christian Action Network," anyone who is a "general right-wing extremist," and many others, any one of which probably includes you. Many patriot organizations such as those affiliated with the Tea Party movement have been thwarted from securing tax exempt status by the Internal Revenue Service.

In the wake of the attacks on September 11, 2001, Patriot Day was signed into law on December 18, 2001 to commemorate those who lost their lives at the Twin Towers, the Pentagon, and a third hijacked flight that crashed in Pennsylvania. 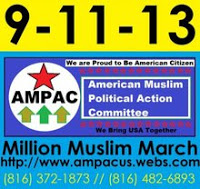 So, naturally, a group called the American Muslim Political Action Committee (AMPAC) has been granted permission to hold a "Million Muslim March" in Washington, D.C. on September 11th. AMPAC claims that Muslims have been "victimized by being made the villains" and "to this day every media outlet and anti-Islamic organization has committed slanderous and libel statements against us as Muslims and our religion of Islam."

On August 20th, the Center for Security Policy, using data published by the Federal Bureau of Investigation, published "Religious Bias Crimes 2000-2009, Muslim, Jewish and Christian Victims: Debunking the Myth of a Growing Trend in Muslim Victimization." The Center analyzed the data and found that, from 2000 through 2009, "Jewish victims of hate crimes outnumbered Muslim victims by about six to one." Subsequent FBI statistics for 2010 and 2011 showed a rate of Jewish to Muslim victims of about five to one. Overall, however, the number of hate crimes reported is low.

If 9/11 has had a negative impact on the Muslim community in America, it is hard to arrive at that conclusion based on the FBI statistics and, in February, USA Today reported that the "Number of U.S. mosques up 74% since 2000."

"While protests against new mosques in New York, Tennessee and California made headlines," USA Today reported, "the overall number of mosques quietly rose from 1,209 in 2000 to 2,106 in 2010."

The conclusion was based on a study by the Hartford Institute for Religious Research (Hartford Seminary), the Association for Statisticians of American Religious Bodies, as well as the nation's largest Islamic civic and religious groups, including the Islamic Society of North America and the Council on American-Islamic Relations.

This is hardly a picture of Islamic repression in America. Safaa Zarzour, secretary general of the Islamic Society said that, despite fears of being "marginalized, demonized and isolated," the study revealed that Muslims have "kept their eyes on the prize, becoming part of mainstream America." Most mosques are in cities, but 28% were in the suburbs by 2010.

In 2010, the Pew Forum on Religion & Public Life conducted a survey that found the Muslim population was approximately 2.6 million. A 2011 survey found 2.75 Muslims in the U.S., of whom 1.8 were adults.

Reportedly, AMPAC has not had much success signing up Muslims to march in Washington, D.C., but the very idea of such an event on the anniversary of 9/11 is a window into Islam a triumphalist religion well known for building its mosques on the sites of former Christian churches and Jewish synagogues. This was evident in 2010 when a Muslim group announced it intended to build a mosque close to the site of the former Twin Towers called Park51. It sparked vigorous debate, but to date the project has not gone forward. Muslims continue to lay claim to Jerusalem. Wherever Islam conquered, even if eventually forced to leave, Muslims assert ownership. 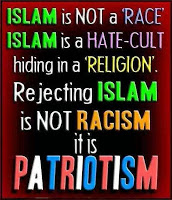 As the twelfth anniversary of 9/11 occurs, Muslims throughout the Middle East continue to drive Christians from nations in which they have lived, often for centuries. The effort of the Muslim Brotherhood to regain control of Egypt was accompanied by the wholesale destruction of Coptic Christian churches and attacks on Coptic businesses, homes, and individuals.

While America has long had a tradition of religious tolerance, that is a two-way street and the evidence of Islamic intolerance is vast. A Christian minister is under a death sentence in Iran as this is written. Christians in the Middle East are being killed and their churches burned. The Islamic conflict between Sunnis and Shiites afflicts the entire Middle East, resulting in bombings in Iraq and underlying the conflict in Syria.

We know who the enemy is. Militant Islam threatens us no less than Nazism in the last century. The American Muslim Political Action Committee is the enemy within our borders, along with other comparable groups. Do not be deceived. Do not let down your guard. Remember 9/11.