I will never understand the kind of thinking behind a lie so big that it became an international fraud and swindle. I cannot understand why an international organization, the Intergovernmental Panel on Climate Change, (IPCC) operating under the umbrella of the United Nations, was permitted to issue reports of an imminent threat to the Earth, to mankind, that a freshman student of meteorology would know were false.

At long last the Big Lie of Global Warming has been totally exposed and we can thank The Heartland Institute, a free market think tank that has organized and hosted eight international Conferences on Climate Change since 2008 to expose the lies behind global warming – now called "climate change" – as it became clear that seventeen years of continuous cooling has put a Big Chill on this Big Lie. 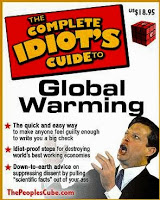 I suspect that the Heartland team, led by Joe Bast and including some remarkable, dedicated people, will only get a line or two in some future historian's account of the deception that began in 1988 before a congressional committee. Thereafter the global warming hoax was given momentum by former Vice President Al Gore who, along with the IPCC, would receive a Nobel Peace Prize!

It helps to have a sense of humor when you are doing battle with hucksters who have the entire world's media to defend them. The climate "skeptics" – some of the world's most renowned meteorologists – dubbed their effort the Nongovernmental International Panel on Climate Change (NIPCC) and, working with the Heartland Institute, have just released a new edition of "Climate Change Reconsidered II."

It arrives just as the IPCC will release its 5th Assessment Report. The IPCC's lies will get lots of news coverage. Heartland's NIPCC report was fortunate to have notice taken by Fox News, but beyond that most of the intransigent U.S. news media ignored it.

As often as not one has to look to foreign newspapers to get the truth. In Great Britain's The Mail, the headline on September 14 was "Global warming just HALF what we said: World's top climate scientists admit computers got the effects of greenhouse gases wrong." A leaked copy of the IPCC report revealed "scientific forecasts of imminent doom were drastically wrong."

Well, of course, they were wrong. The so-called "science" on which they were based was idiotic. It focused primarily on carbon dioxide (CO2) and other so-called "greenhouse gases," claiming they were trapping heat while being produced by all manner of human activity related to generating energy with coal, oil, and natural gas.

Dr. Martin Hertzberg, Ph,D, co-author of "Slaying the Sky Dragon – Death of the Greenhouse Gas Theory," summed it up neatly, pointing out that water vapor in the Earth's atmosphere is a primary factor affecting climate long term and weather short term.

"The determinant of weather is mainly water in all its forms," said Dr. Herzberg, "as vapor in the atmosphere, in its heat transport by evaporation and condensation, as the enormous circulating mass of liquid ocean whose heat capacity and mass/energy transport dominate the motions of our atmosphere and the precipitation from it, and finally as cloud, snow, and ice cover which influence the radiative balance between the Sun, the Earth, and free Space."

As you try to wrap your mind around that explanation, just think about the way the Earth goes through regular seasons as well as predictable cycles of warming and cooling. It has done this now for some 4.5 billion years.

To read "Climate Change Reconsidered II," visit its website. Among its findings, the report notes that "no close correlation exists between temperature variation over the past 150 years and human related CO2 emissions." Blaming the climate or even the weather on humans is insane. You might as well blame the floods in Colorado on humans instead of the downpours of rain, comparable to 1894 and 1969.

Indeed, the U.S. gives ample evidence of greatly reduced events associated with the weather. There have been fewer tornadoes over recent decades. It's been eight years since a Category 3 hurricane hit the U.S. Droughts have been shorter and less extreme than the 1930s and 1950s. And sea levels are predicted to increase barely four to eight inches per century and that may be on the high side. There will be dramatic weather events, but there have always been dramatic weather events!

The Heartland's new report is welcome, but both they and I know that the same deceitful charlatans are still at work in the United Nations, in the United States, and around the world to keep this greatest of hoaxes alive.

The harm the global warming hoax has done and continues to do is best seen in the efforts of the Environmental Protection Agency to wipe out the coal industry based entirely on the lie that CO2 is a "pollutant." When the House Energy& Commerce Committee held a hearing on the Obama administration's climate policies thirteen agencies were invited to testify, but the administration provided only EPA administrator Gina McCarty and Energy Secretary Ernest Moniz. The latter read a prepared statement that was one long lie about global warming. Presumably he was under oath!

Ms. McCarty, the latest in a long line of environmental fanatics to run the agency, was forced under questioning to admit that current and proposed greenhouse gas regulations are not there to protect the public but to influence "the international community" to reduce their CO2 and other alleged emissions. Not only do the regulations have no basis in science, but they exist to keep the environmental war on energy use going and to pressure developing nations such as China and India. Within the past month, the citizens of Australia rose up and threw out the politicians who imposed a "carbon" tax on them. The new prime minister has shut down the "climate ministry" that existed to enforce it.

And while most of the world wasn't watching, the United Nations was seeking to impose, once again, an international agreement similar to the failed and defunct Kyoto Protocol to limit CO2 and other greenhouse emissions, based on the BIG LIE! The 44th Pacific Islands Forum, held in the Marshall Islands, was intent on "an ambitious future climate regime to be finalized in 2015."

That is what must be understood. These people will not give up until they have no other option. They will continue to exploit the ignorance of people regarding the actual science, penalizing them by driving up the cost of energy use, by closing down energy industries, prospective projects, and the jobs they provide,

They sustain the malignant ethanol scam that is ruining engines as this is being written. They are behind the useless solar panel and wind turbine industries that produce so little actual electricity they are a negative drag on the national grid. You, however, are picking up the tab for their mandated use. They practice a form of child abuse to tell children the Earth is doomed if their mother uses a plastic bag to bring groceries home from the supermarket.

The world's BIGGEST LIE has been exposed and it will have to be exposed again and again until a stake is driven into the evil heart of the "global warming" hoax.