October 1, 2013
On the conservative side of the political spectrum, we frequently refer to liberals as "low information voters," a nice way of saying they are stupid. From their point of view, however, we are the stupid ones. And not merely stupid, but evil. 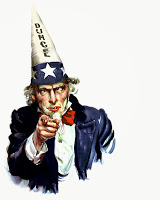 The divide between conservatives and liberals can be seen in the outcomes of the many polls and surveys that are announced on a daily basis. The numbers are depressingly the same; ranging from 40-40% or 50-50%, depending on how many respond that they don't have an opinion. There is, moreover, what I call the "thirty percent syndrome" of reliable liberal responses no matter what the issue may be. They are the hard core.

There is, however, a critical difference between stupidity and ignorance. All of us are ignorant about something or many things. I surely am. I am in awe of people who can make things or fix things. I appreciate it when someone demonstrates expertise that informs me about a topic.

If you Google "Americans + stupid" you will discover that the subject of whether Americans are stupid generates a significant number of news items and articles. For example, in late February, Reuters reported on a speech Secretary of State John Kerry gave to students when he was visiting Berlin. While discussing America's virtues, such as tolerance of other points of view, he said, "The reason is, that's freedom, in America you have a right to be stupid."

Kerry, who I have always regarded as a dim bulb, inadvertently spoke a truth about the way those currently in high office, the President, his Cabinet members, and staff regard Americans. Those who oppose their policies and legislative agenda are "stupid" and, if the President is to be taken at his word these days, Republicans are "extremists" and other pejoratives. He is a master of the propaganda technique of repeating a lie often enough until it becomes "truth."

I find it depressing to find that so many of our elected representatives display their ignorance on a daily basis. It is depressing to know that officials appointed to positions of great responsibility in our government see it only has an opportunity to impose some ideology or agenda that is disconnected from science or from any facts that support their machinations. 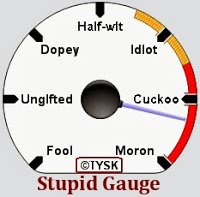 Let me say that I have long regarded Barack Obama as stupid. His incompetence manifests itself daily. He cannot speak without the assistance of a Tele-Prompter. He has zero experience with the way people make a living or run a business. He has zero experience regarding military affairs and appears to have no knowledge of history. His lack of knowledge about economics has left the nation with the highest debt and deficit in its history, and millions unemployed.

Obama is currently campaigning to make the low information voters believe that Republicans in Congress want to "shut down the government" and this is patently untrue. Speaker of the House, John Boehner, now daily repeats that Republicans in the House do not want to shut down the government, but are addressing whether to defund Obamacare. There's a difference, but Obama and his minions will repeat and repeat and repeat the lie. In truth, most Republican leaders in Congress know that defunding is a fool's dream.

The single greatest example of stupidity in America today is the Affordable Care Act – Obamacare – a law that is increasing unemployment, forcing others into part-time, unemployment, and denying physicians the right to practice medicine while stripping patients of their privacy, and will ultimately deny care to some judged ineligible due to age or a previous condition.

On September 17, Jonathan Jacobs, the director of the Institute for Criminal Justice Ethics and chairman of the Department of Philosophy at John Jay College of Criminal Justice, was published in The Wall Street Journal. "As Education Declines, So Does Civic Culture."

Noting the "laments from graduates" that emerge with student loan debt and "wondering if their studies have prepared them for jobs and careers" Jacobs expressed the opinion that "A less familiar but even more troubling problem is that their education did not prepare them for responsible civic life."

That is a very nice way of saying that, by the time many reach college, they are poorly prepared for that level of "higher" education and too often pick up a diploma because colleges and universities these days are frequently just giant sausage factories that exist to process students through while squeezing every dollar out of them. The problem begins, however, in kindergarten with a thoroughly dumbed-down educational system.

Jacobs acknowledges this saying, "The trouble begins before college. Large numbers of high school students have faced so few challenges and demands that they are badly unprepared for college."

"Even after three or four years of undergraduate education, many students," said Jacobs, "still cannot recognize reasoning when they encounter it."

Reasoning is a cognitive function that employs facts and analysis. Much of what passes for political discourse from the White House and Democratic politicians these days is based on emotion no matter what the issue may be; whether it is gun control or invading Syria.

Conservatives are denigrated for actually pointing to the Constitution and suggesting that what is being proposed is forbidden by it. If, however, the intended audience has never read the Constitution and has a warped or inadequate understanding of American history, that kind of demagoguery works.

"A great many graduating students have little idea of what genuine intellectual exploration involves," said Jacobs. They have passed through all phases of the educational system lacking the capacity to think through, not just the issues of the day, but have failed to acquire the most basic skills. He noted that employers frequently discover that "many college graduates can barely construct a coherent paragraph and many have precious little knowledge of the world – the natural world, the social world, the historical world, or the cultural world."

How many times has Jay Leno gone onto the street to ask people questions about events and personalities, only to demonstrate how abysmally ignorant they are? This kind of street theatre is repeated all the time in YouTube videos. A recent one asked people to sign a petition to have Karl Marx run for office!

"The cost to America of failing to reverse the trend toward trivializing education will be more than just economic," said Jacobs. "It will be reflected in social friction, coarsened politics, failed and foolish policies, and a steady decline in the concern to do anything to reverse the rot."

The late comedian, George Carlin, once said, "Never underestimate the power of stupid people in large groups." I thought of that when I heard that Barack Obama had been reelected.