October 28, 2013
"Oxymoron: A figure of speech in which antithetical incongruous terms are combined, as in a deafening silence or a mournful optimist; pointedly foolish." – Webster's II New College Dictionary. To this definition, one can add "same-sex marriage." 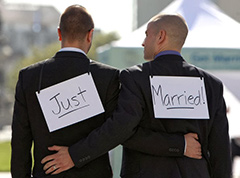 In their book, "America 3.0," the authors, James C. Bennett and Michael J. Lotus, assert that "The impact of marriage and family practices on our American life and our history have been overwhelming. It has caused Americans to have a uniquely strong concept of each person as an individual self, with an identity that is not bound by family or tribal or social ties. Most cultures historically and around the world today have nothing like this American spirit of individualism. Our distinctive type American nuclear family has made us what we are."

The American nuclear family has always been defined as a man, a women, and children resulting from that bond.

In total, only about 3% of the population is homosexual. Given the constant media attention given to this vocal minority as news and on television and in films, one might be led to believe that they constitute are a far larger portion and yet they have managed to alter public opinion significantly regarding their sexual orientation and "rights" they claim have been denied.

In October, Rasmussen Reports reported that "voters nationwide are almost evenly divided when asked if marriage is a religious or civil institution, but slightly more feel laws regarding marriage should be set at the state or local level rather than by the federal government. There are sharp differences of opinion over gay marriage depending on how voters feel about these two issues...48% of likely U.S. voters consider marriage to be more of a religious institution than a civil one. Nearly as many (45%) regard marriage more as a civil institution."

Try getting married without a license issued by a state. You can't. Whether you think it is civil or religious – it is both – for millennia people worldwide have regarded marriage as exclusively between a man and a woman, sanctioning it in law and practice.

For the record, this is my view and I regard efforts to change this definition as a threat to the core values of our society and the understanding that the nuclear family is the most essential element of our society. I do not oppose so-called "civil unions" that extend legal benefits to same-sex couples that are enjoyed by a traditional marriage.

We have seen what happens when the regard for fundamental elements of society are altered. An example was the Supreme Court decision that ruled that abortion was a legal right. The result has been the murder of millions of unborn children. According to available data, in 2008, approximately 1.21 million abortions took place in the U.S., down from an estimated 1.29 million in 2002, 1.31 million in 2000 and 1.36 million in 1996. From 1973 through 2008, nearly 50 million legal abortions have occurred in the U.S.

There are cases affecting the definition of marriage coming up before the Supreme Court. In a June commentary by Ryan T. Anderson, "On Marriage, Inevitability is a Choice We Can Reject", the author notes that "Citizens have gone to the polls to vote about marriage in 33 states. The truth about marriage has prevailed 30 of those 33 times." He expressed concern that "Still, no one can deny that Americans' support for marriage is not what it once was. This is largely because we have done an insufficient job of explaining what marriage is, why marriage matters, and what the consequences will be if we redefine marriage."

"Marriage is founded on the anthropological truth that men and women are different and complementary, the biological fact that the union between a man and woman also creates new life, and the social reality that children need a mom and a dad."

"All the polls in the world cannot undo the truth about marriage," said Anderson, but they can obscure the truth and make it less likely that men and women commit to each other permanently and exclusively. This in turn reduces the odds that children will know the love and care of their married mothers and fathers."

What we have been witnessing in America has been a systematic attack on its most fundamental civil foundations and, when the voters have their say, they have overwhelmingly rejected same-sex marriage. However, when the courts have ruled, the consequences have been far-reaching and ultimately harmful to our society.