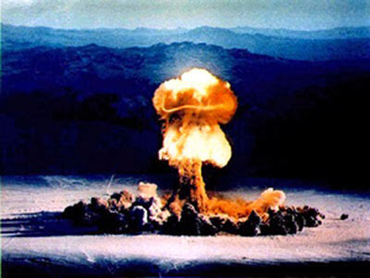 The "knockout game" is in the news these days along with much discussion of bullying. Football is a game of violence with rules in which players frequently sustain injuries. Terrorism has been adopted to advance the Islamic goal of global domination. And the administration just announced an agreement with Iran in a vain effort to slow their intention to join the nuclear club of nations with the capacity to kill thousands, if not millions.

It is impossible not to conclude that violence is not built into the DNA of mankind.

In his 2007 book, "The Most Dangerous Animal: Human Nature and the Origins of War," David Livingston Smith, a professor of philosophy at the University of New England, wrote: "The track record of our species shows, beyond a shadow of a doubt, that we are extremely dangerous animals, and the balance of evidence suggests that our taste for killing is not some sort of cultural artifact, but was bred into us over millions of years by natural and sexual selections."

On the plus side, he wrote "But we have also seen that there is something in human nature that recoils from killing and pulls us in the opposite direction."

It's worthwhile to take a moment to contemplate violence. A statistical analysis, Smith noted, reveals the constancy of war. "Looking at forty-one modern nation-states between 1800 and 1945, we find that they average 1.4 wars per generation and 18.5 years of war per generation."

"Almost 200 million human beings, mostly civilians, have died in wars over the last century, and there is no end of slaughter in sight," wrote Smith. "The threat hangs over all of us, constant and unrelenting."

The brief notice of the slaughter occurring in Syria when poison gas was used is instructive. A wider war was avoided when Russia stepped in to negotiate the destruction of this weapon and was occasioned only when President Obama contemplated military strikes. At this writing, 100,000 Syrians and combatants have died. It is no longer an on-going news story.

"The Value of Violence" is a new book by Benjamin Ginsberg. "Honesty would be so frequently damaging that virtually all politicians and public officials become practiced liars," notes Ginsberg, suggesting that "cynicism should be understood as a reasonable, if mainly intuitive, popular response to the realities of politics."

The deal with Iran, albeit for only six months, was conducted in such secrecy that none of the members of Congress, including its leadership, were aware of it. The killing of a U.S. ambassador in 2012 on the anniversary of 9/11 was immediately surrounded in lies when Americans were told it was initiated by a video no one had seen, rather than one more episode in the war that Islamic fascists have engaged in since the 1980s. The nation is trying to extract itself from Afghanistan after the 2001 act of war we call 9/11 and has left Iraq after a war whose justification is subject to question. Long wars of attrition sap the strength and will of even a superpower.

The reason the deal with Iran is so suspect is the fact that it is the nexus for much of the terrorism in the world, sponsoring organizations like Hezbollah and Hamas. It has engaged in every manner of violence from assassination to kidnapping and hostage-taking.

Ginsberg notes that "In recent decades, for example, armed insurgents have employed violence or the threat of violence to overthrow a number of established regimes. The African continent alone has experienced some eighty-five successful military coups during the past sixty years." It is Africa that mankind evolved, standing upright, and walking to inhabit all the other continents.

Much is made of violence in America. It is the daily content of news. "In the United States alone, nearly one and a half million individuals become the victims of violence every year – pushed, kicked, pummeled, stabbed, and shot – while tens of thousands of others are the perpetrators of these same acts."

Indeed, America was born in violence as citizens took up arms against the British to establish the nation. Not that long after, it fought a bloody civil war to retain the union. The right to bear arms, as much to hold the government in check as any other, is part of our Constitution. An estimated eighty million Americans own a gun or rifle or both.

One can argue that violence on the individual, national, and international level is the price that humanity pays for its own inherent, even genetic, inclination to use violence for a wide variety of purposes. It has been used by the great religions and by nations alike.

It will not end. Our best efforts can only restrain it within ourselves, but weakness, too, is an ancient invitation to violence. Appeasement is a trap.