Alan Caruba
From prohibition to Obamacare 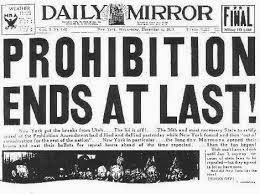 "Of all tyrannies, a tyranny exercised for the good of its victims may be the most oppressive. It may be better to live under robber barons than under omnipotent moral busybodies. The robber baron's cruelty may sometimes sleep, his cupidity may at some point be satiated; but those who torment us for our own good will torment us without end for they do so with the approval of their own conscience." – C. S. Lewis, author of The Chronicles of Narnia and many other works of literature.

It is one of the great mysteries that, for progressives, also called liberals, the past provides no lessons, no warnings that would prevent them from repeating their errors. Progressives are always focused on a magical future in which there will be no wars, no hunger, no poverty. Their belief in the redistribution of wealth – communism – is, in Winston Churchill's words, "the equal sharing of misery."

Obamacare is a perfect example of the progressive inability to accept that socialism and/or communism simply does not work. It depends on coercion and in the case of communism it left hundreds of millions dead in its wake over the course of the last century. Obamacare depends on (1) the belief that human nature will change – which it will not – and (2) the lies to implement it.

The news is filled with the failure of the government, despite the expenditure of hundreds of millions of dollars, to provide a working website. Even assuming that the technical problems are solved, the failure of Obamacare is built-in because Americans have always enjoyed a culture of independence, despite the creep of government programs that occurred over the last half century.

The trust in the federal government, of Congress, is at an all-time low.

Social Security is insolvent or soon will be. Medicare was rendered even more insolvent when billions were transferred to Obamacare. Medicaid will bankrupt states as thousands more sign up for this program of minimal medical service.

As I listened to and read about the Obamacare roll-out, I was reminded of an earlier program that was adopted, Prohibition. It involved a nationwide ban on the sale, production, importation, and transportation of alcoholic beverages. It was the law of the land from 1920 until 1933. When it went into effect it was hailed as a victory for public morals and health. By the time it was repealed with the 18th Amendment to the Constitution, Americans had seen the growth of organized crime, the corruption that permitted ordinary citizens to ignore it, and the loss of the taxes to fund other aspects of governance.

Wikipedia notes that "By 1925, in New York City alone, there were anywhere from 30,000 to 100,000 speakeasy clubs" where liquor was sold. Prohibition proved nearly impossible to implement and enforce."

Barack Obama represents the high-water mark of progressives to impose communism on America. A totalitarian form of government, we have witnessed how his administration has turned the Internal Revenue Service into a political instrument to suppress its opponents and has expanded the National Security Agency into a means to spy on all Americans, accessing every piece of communication between them. Obamacare enables the government to know every bit of information about individual's health records.

It is, as C.S. Lewis said, "tyranny exercised for the good of its victims." Even so, the progressives ignore the failure of communism in the former Soviet Union and the decision of China to move to a capitalist economy while endeavoring to retain a single party government that is encountering increasing protests and resistance from its population.

Obamacare is being imposed at the same time that socialist healthcare programs are in retreat in Europe. In Britain, the government led by Prime Minister David Cameron has introduced a bill seeking to partially privatize the National Health Service (NHS) in an effort to avoid the Greek-style financial meltdown that threatens the European Union member states. Cameron's argument for the bill is that there is too much bureaucracy in the NHS system and that it interferes will patient care. NHS is based on the rationing of medical care as opposed to the free market system where costs are determined by supply.

As reported in a recent article by Arnold Ahlert on Front Page Magazine.com, "Last November, such rationing reached a scandalous level. A study by the Co-operation and Competition Panel revealed that Primary Care Trust heads were imposing arbitrary spending caps, denying patients procedures such as hip replacements and cataract removals – and that waiting times for services were seen" to be deliberately extended 'so patients would go private or die before they were seen,' to slash costs."

In a November 30 Washington Times article by Jennifer Oliver O'Connell, it is reported that the inherent unconstitutionality of Obamacare will bring about its end. Cases making their way through the judicial system such as Sebelius v. Hobby Lobby and Conestoga Wood Specialties Corp v. Sebelius, Indiana v. IRS, Pruitt v. Sebelius, "may be the final nails in the coffin of Obamacare." The first two cases cited will likely be heard in March with a final ruling in the summer of 2014. There are others such as Halbig v. Sebelius, King v. Sebelius, the Independent Payment Advisory Board, as well as the HHS employer mandate and origination clause challenges are among the many cases challenging the basis of Obamacare.

Obamacare is the ultimate expression of the progressive and/or liberal approach to government and it is, just as was the case of Prohibition, the increasing resistance of the American public and will be, at some point, repealed.