Alan Caruba
You want fries with that? 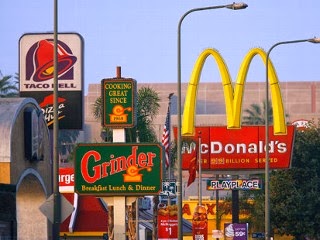 On Thursday, Dec 5, there will be protests in more than a hundred cities across the nation directed at fast food chains, demanding an increase of the minimum wage to $15.00. Those who may be interviewed for radio and television will talk of receiving "a living wage."

In his 2013 State of the Union speech, President Obama called for an increase in the $7.25 minimum wage to $9.00 an hour. It should come as no surprise that one of the President's most active supports has been the Service Employees International Union (SEIU). It was identified on the liberal website, Salon.com, as "a key player" behind the strikes.

Don't expect the mainstream media to ask who's behind the strikes or, if informed, ask what their agenda is. The reporting will be mostly people with sad stories. You are not likely to hear about the National Employment Law Project, a liberal activist group that, since 2000, has received more than $1 million from George Soros and his Open Society Foundations.

When the government cracked down on ACORN, community organizers with whom Obama was associated, one of its reorganized groups became the New York Communities for Change (NYCC). The director of NYCC is also the director of Fast Food Forward, a group that advocates for raising the minimum wage. What emerges is a network of Leftist organizations and unions who have their own agenda, the fundamental transformation of America.

Being poor is hell, but being unemployed is even worse...unless you are receiving government benefits from free cell phones to food stamps, disability insurance, et cetera. Across the nation, fast food chains provide employment opportunities for hundreds of thousands, but most especially as an entry-level job for the young.

The concept of minimum wage laws began back in 1938 when the Great Depression was raging (not unlike today). The Fair Labor Standards Act set the minimum wage at $.25 cents per hour. After a succession of increases, it reached $5.15 in 1997 and is currently $7.25 an hour.

Being conservative, I have some real problems with the government setting such requirements because there are often unintended consequences. The Concise Encyclopedia of Economics has a section devoted to the minimum wage, noting that, while it can and does set wages, it cannot guarantee a job. Indeed, "several decades of studies using aggregate time-series data from a variety of countries have found that minimum wage laws reduce employment."

The Heritage Foundation, a leading conservative think tank, notes that "The problem with minimum-wage increases is that they reduce access to these entry-level jobs. It is a basic tenet of economics that when the price of something rises, people buy less of it." Liberals seem incapable of understanding this. They are all about "fairness" in a world that was never fair. Equality before the law is not the same as equality of who your parents are, where you live, the education you received, or whether you possess the skills to secure a higher wage than others.

So, while you watch the TV coverage of the protesters, keep in mind that they are demanding a wage increase that will actually reduce the number of jobs available as businesses, mostly small to medium in size, decide to lay off workers or just not hire more through automation. Keep in mind, too, that the unions' interest in this issue is one of signing up more members whose dues will contribute to the lifestyle of their leaders and ability to use that money to support and influence liberal candidates and office-holders.

"In addition to making jobs hard to find, minimum wage laws," says the Encyclopedia of Economics, "may also harm workers by changing how they are compensated. Fringe benefits – such as paid vacation, free room and board, inexpensive insurance, subsidized child care, and on-the-job training – are an important part of the total compensation package for many low-wage workers."

In the end, an increased minimum wage in fast food establishments might well doom the McDonalds dollar menu and other low-cost items offered by other chains. A recent article on The Daily Caller quoted Michael Saltsman, the research director at the Employment Policies Institute, who noted that "McDonalds in Europe replaced a lot of their workers with touch screens. So instead of placing your order with a person, you are placing it with a computer screen. There is even technology that exists now to automate burger-making."

The FACTS clearly suggest that increasing the minimum wage runs counter to all the protester's demands for "a living wage." I suspect that many who are employed by the fast food chains and retailers like Wal-Mart are pleased to being receiving a regular check in these hard times, even if they have to hold down more than one job to get by.

Only the Left and the unions seem to have anything to gain from these protests. They, however, thrive on demonizing big corporations while the reality of those working for minimum wage these days – 52% – work for small businesses with less than a hundred employees.

These protests – and there are more planned for the summer – are completely counter-productive for the low-wage workers and their families, but it is doubtful they have any understanding of this fundamental truth.

In the end, we are all in the same boat, a nation whose growing debt, spawned by too much government spending and borrowing, is the greatest threat.