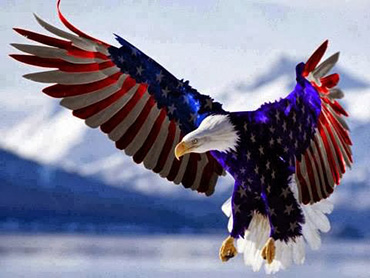 We are all besieged daily by bad news. It is easy to become depressed about the present state of the nation, but there is some very good news as well.

This is not to say there aren't legitimate problems and concerns. The last two elections put a President in office that lies all the time. The nation's economy has been so awful that 100 million Americans are either out of work or have ceased looking for work. Democrat political leaders are actually telling Americans that being unemployed is a good thing because it leaves them free to pursue their hobbies.

The President has been pursuing a campaign to make Americans believe that there is massive income inequality when, in fact, there is relatively little. There has always been a very wealthy class and a very poor one. What there is, however, is a loss of wealth primarily in the Middle Class. As for poverty, America has long provided income mobility to those who wish to study and work hard to improve their status.

What is rarely addressed is the seething power of American entrepreneurship which, at present, is trapped by a largely socialist federal government imposing a mountain of regulations that thwart growth and take money from the private sector that would otherwise be invested in the creation or expansion of business and industry nationwide.

Americans have repeatedly suffered, survived, and overcome financial crises to come back to build the greatest economy in the world. Part of the reason for this are the long established values that Americans of every description embrace.

That is why Wayne Baker's new book, "United America: The Surprising truth about American values, American identity and the 10 beliefs that a large majority of Americans hold dear" is a welcome review that the author's extensive research confirms. 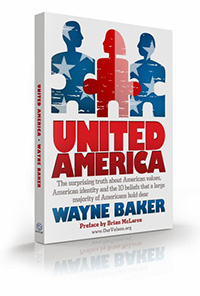 A journalist, David Crumm provides an introduction to Baker's book. "Dr. Baker defines a Core American Value (as one) that is strongly held by a large majority of Americans, stable over time, and shared across diverse demographic, religious and political lines...Here a core value represents an area of deep and broad consensus among American people, not disagreement and division. A core value is not a prescription of what Americans ought to believe, but what Americans actually do believe."

The research supporting Dr. Baker's book was conducted over two years by the University of Michigan Institute for Social Research and was funded by the Carnegie Corporation of New York and the Institute. The data was analyzed with a battery of statistical techniques to ensure the validity and reliability of the results.

Touching on a few of the values addressed in the book, Dr. Baker starts with respect for others which he describes as "so important that it actually characterizes what it means to be an American...More than 90 percent of Americans in the national surveys I conducted said that respect for people of different racial and ethnic groups is important to them."

"Respect is given to people who do what they say, who live according to what they believe, who are persons of integrity. A position or title doesn't necessarily garner respect, but integrity does" says Dr. Baker and that is bad news for those identified as "leaders" or "experts" who do not display integrity. Telling lies undermines everything they say and do.

"We have what appears to be a contradictory situation," says Dr. Baker. "Politicians, political elites, and party activists are increasingly polarized, moving further apart from one another. Yet public opinion polls clearly show that Americans loathe the divisiveness. And the values of Americans are not polarized."

"There is widespread agreement among Americans when it comes to core values. Which means our polarizing politicians are becoming less and less representative or our actual views."

A review of those core values show that Americans love their symbolic patriotism such as our flag and our national anthem. "Love of country is especially strong in America" says Dr. Baker.

"Americans hold tenaciously to the principles of liberty and freedom," says Dr. Baker. "A 2013 poll by the Pew Research Center shows that 53 percent of Americans see the federal government as a threat to personal rights and freedoms. This is the first time since Pew started asking about this issue in 1995 that a majority felt this way."

Little wonder when one recalls the assault on the Second Amendment that was launched by the Obama administration and one that failed significantly. Recent news of the Federal Communications Commission's plans to "monitor" radio and television news judgments evoked a comparable response.

Freedom to participate in politics and elections evoked a response in which 98 percent of Americans agree with this definition of freedom and it stands in stark contrast to the Obama administration's corruption of the Internal Revenue Service to deny Tea Party and patriot groups non-profit status routinely granted to other groups.

As one reads Dr. Baker's book, one comes away with a renewed confidence in the judgment of Americans, confirming that their core values are those that have made America a beacon of freedom in the world.

And that's the very good news!