Alan Caruba
Obama must go! (But he won't) 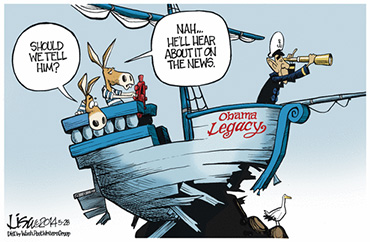 Given the collective anger over the exchange of five Taliban commanders for what appears to be a U.S. Army deserter, combined with the anger from the Veterans Administration revelations, one might be tempted to think that Obama would be impeached or would resign, but neither of those options will occur.

He's not leaving because he doesn't care what Americans think and only cared when the issues involved forthcoming elections. He was, after all, elected twice. He doesn't even care what the members of Congress think, relying now entirely on executive orders and by working his way through federal agencies and departments.

He knows that his approval ratings fluctuate between 48% and 51% on any given day – a testimony to the stupidity that liberals embrace while accusing conservatives of being stupid – and he knows that the vast bulk of Americans are too busy trying to hold onto their jobs, if they have one, and that most do not spend much time paying attention to the issues. Large numbers receive some form of federal assistance and that is their sole concern.

Until the Taliban debacle the mainstream media could be depended upon to ignore tragic events like the Benghazi attack and its cover-up. Indeed, some speculate that Obama thought that getting a U.S. soldier back from the Taliban would detract attention from the VA issue, but did not anticipate how badly that would turn out. It was, after all, part of his intention to release all of the Gitmo detainees and close the facility.

It hardly seems accidental or ironic that the spokesperson for both scandals has been national security advisor, Susan Rice, lying through her teeth.

In the 2010 and 2012 elections Republicans gained more seats in the House of Representatives, but made little progress in the Senate. Some Tea Party movement conservatives like Sens. Ted Cruz, Mike Lee and Marco Rubio now hold office, but they are a minority within a minority so far as the U.S. Senate is concerned. I will take any progress we make and any candidate with a "R" after his or her name.

Even if the GOP were to gain control of the Senate after the forthcoming November midterm elections there will be no impeachment proceedings against Obama because Republicans with long memories will recall how badly that turned out when it was attempted against Bill Clinton. It was rejected and he went on to become the Democratic Party's popular senior statesman.

Hillary Clinton has let it be known she did not favor releasing the Taliban commanders. A story in the Daily Beast on June 3 reported that "Secretary of State Hillary Clinton was personally and intensely involved in the debate over swapping five Taliban commanders for Sgt. Bowe Bergdahl in 2011 and 2012. But she had severe reservations about the potential deal, and demanded stricter conditions for the release of the prisoners than what President Obama settled for last week."

Should she become the Democratic Party candidate for 2016 Hillary will put as much distance as possible between herself and Obama.

Will Obama resign as this new wave of anger sweeps over the White House? That is not going to happen either.

If we know anything about Obama at this point it is that he has no regard for the oath of office he took, even less for the Constitution. He breaks laws now with virtual impunity.

He knows that his lies have made it possible for him to pursue his agenda for legislation like Obamacare, increasing the national debt to the highest it has ever been, and imposing regulations through the Environmental Protection Agency to conduct his "war on coal." His "stimulus" to goose the economy was a failure. His "reset" with Russia has been a failure along with other foreign policy missteps.

When Obama leaves office – assuming the worst fears of many conservatives that he will declare martial law and try to make himself President-for-Life will not occur – he will have a long life of considerable wealth awaiting him. He will be gone, but in the same way the Clintons are gone, yet still making news.